Welcome back to the latest installment of The 30-Dollar Raw Denim Experiment–the one in which we reveal the brand and model of the jeans, along with giving you a full update on the wear process. In case you’ve missed the history of this pair, check out the link to get a full description of the various stages of the experiment.

In withholding the brand, I hoped to curtail any brand bias and let the jeans speak for themselves. To give credit where credit is due, our reader moobar guessed the brand right on the money in the comments section of the first installment. These are–drumroll–the Quiksilver Red Lines Jeans. Here’s a refresher on the details:

I will be the first to admit that, before this experiment, Quiksilver was not the first brand that came to mind when I thought about raw selvedge denim. Alright, to be frank, before this experiment, it never came to mind. But that was why I was intrigued on first discovering this pair. I had never owned any Quiksilver jeans, let alone a pair of raw selvedge, and I had never heard of anyone who had. Luckily, I was able to try them out with minimum damage to my wallet and pass the news along to you.

Since the last update, I have been wearing them less frequently–only about two or three times a week. I would say that the actual time of wear clocks in at about 9 months. No crazy exploits to report: just the usual motorcycle rides, playground sessions, beach trips, and frequent walks.

I gave them another wash after the summer, making it a total of 2 washes. While my first wash was a hot machine one with no soap–intended to shrink the waist–the second wash was done in the tub inside out and by hand in cold water with Woolite Darks. It was around 8 months of actual wear time, and my nose was telling me it was time for some soap. I’m not holy about my washing routine, and I do so on a need-to-nose basis.

Here are my parting thoughts about the time I’ve spent in the jeans:

As I mentioned in the previous installments, I was a little skeptical of the fact that these were 2 percent spandex. I wouldn’t call myself a purist, but I had never worn any jeans with a stretch component. The stretch made the break-in period nearly non-existent, and they only got softer as time went on. After a solid amount of wear, I can firmly state that the stretch did not significantly affect the creases or the fading. So fear not the stretch, my friends, if it is fades you seek. My skepticism has been put to rest.

The denim continued to develop character as the months wore on. The slubbiness served to emphasize the “tate ochi,” or vertical fades, which are actually my favorite aspect of the fading on these jeans. This only became more apparent with more wear and the additional wash. 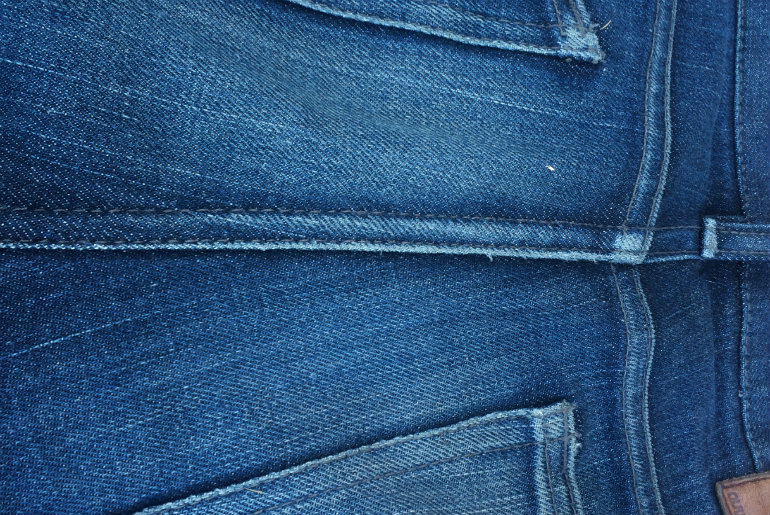 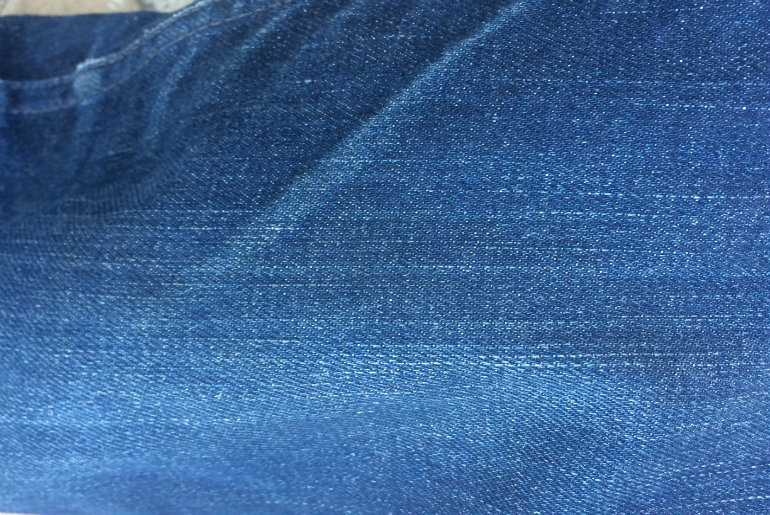 The honeycombs continued to come along, and the wallet and phone fades are nearly white now. As happens with most aged denim, these guys have begun to lose the battle against my wallet and phone. There are small holes in each of the most stressed points.

I was actually surprised that it took this long for the holes to develop, as the denim is only 11 ounces. I would have to credit the stretch-component for keeping the denim alive so long in those spots. Perhaps another reason to consider the stretch option beyond mere comfort. 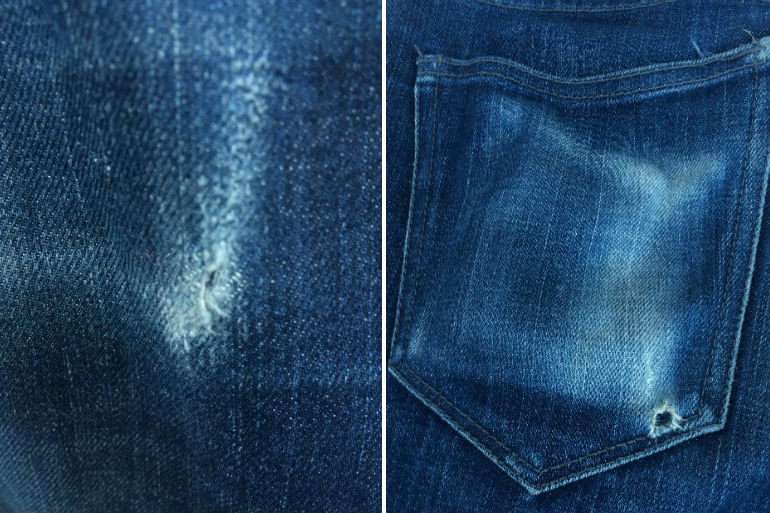 The color is another highlight for me. They started off as a uniform dark indigo, but they’ve developed a nice deep blue color which shifts depending on the light. The fades are greyish in the less stressed spots, but the warp threads in the more faded areas are now white.

Quiksilver doesn’t release any information regarding their source mill (most likely due to the fact that their target consumer probably wouldn’t care), but looking at one of our previous posts, I noticed that Railcar Fine Goods had picked up a double-redline selvedge from Kurabo Mills, so it’s possible that the denim originated there. Regardless, I will say that the denim has been top-notch, and I’ve loved watching these age. 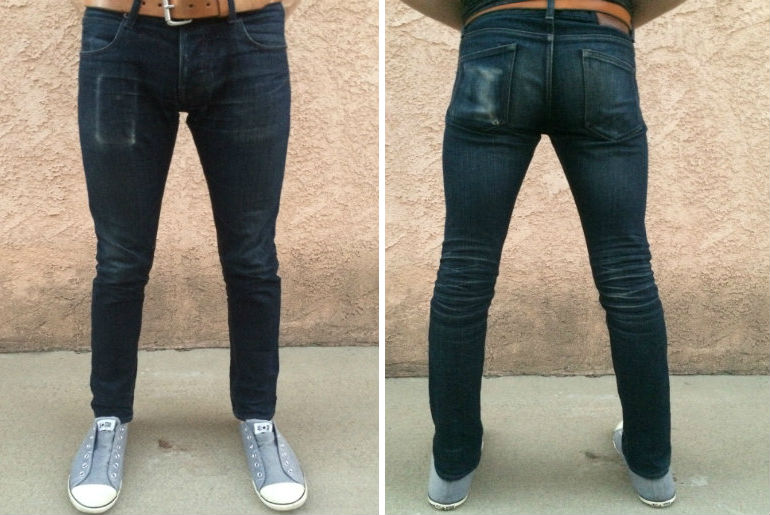 I dealt with a little frustration on this front. As I mentioned in the previous post, the waist stretched about an inch after wearing them for a couple months, so I washed them in hot water to shrink them down. It did the trick for the waist, but of course it shrank the denim all around, leaving them a little tighter in the legs. I was expecting that they would stretch back out, but they actually stayed tighter and never really made it back to their original shape. I would definitely call the fit skinny rather than slim-straight, which is how they’re advertised.

The more pertinent problem was that they shrank in length, leaving them shorter than I like. My true inseam is 32 inches, but, as these started at 32, they ended up too short. I figured washing them cold would keep them from shrinking more, but, alas, they got a little bit shorter after the second wash also, leaving them at a length that is much shorter than I would usually wear.

Aside from the length issue, these were beyond comfortable due to the stretch. I’m not saying I’m going to buy spandex-blend fabrics from here on out, but these have absolved any fears I may have had about looking like I was wearing jeggings.

These jeans held up well in all respects. There is still no loose stitching, the hardware is all intact, and the only holes are in the most stressed areas. I must admit that I was anticipating a crotch blow-out due to the tightness, but I think that the spandex helped out here, coupled with the fact that I washed them at 5 months, which is relatively early (in the raw world, at least). The pocket bags–a constant frustration for many of us–held up splendidly. The flat-felled seams did their work, and I needed no repairs for the entire time I wore them. 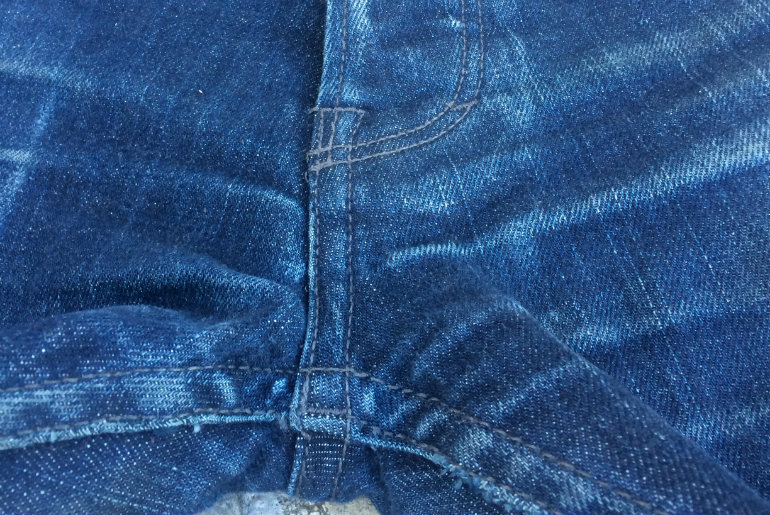 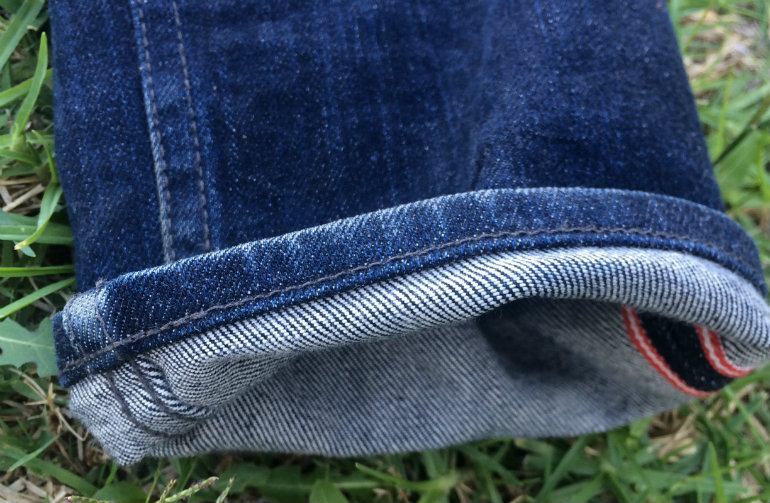 Many of us who have been into raw denim and selvedge would not think to look in the direction of a brand like Quiksilver. I had no idea they even offered selvedge jeans at all before discovering these, but I was impressed with the level of quality in both denim and construction, along with the attention to detail. I love the double-redline selvedge ID, the tasteful graphics on the pocket bags, and the almost tonal grey stitching. The black hardware is also nicely understated.

The fit did offer some issues, but nothing so ridiculous that I had to give them up entirely.

While you can still check these out on Quiksilver’s website, it appears that they are no longer in production. You can still find them on other sites though. I would say that a pair of jeans like this is perfect for the first-time buyer: you get the experience of buying raw without too much of a financial risk (especially if you can get them at such a deep discount), and they’re not going to give you hip blisters. Save those for when you’re a true masochist who’s willing to pay 300-plus for the privilege.

I’ve got another pair lined up for experimentation, so I’m putting these guys on the shelf. Thanks for keeping up with their progress. Check out the photos below. 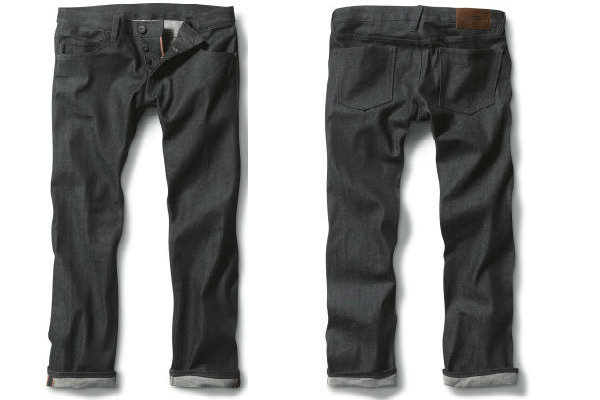 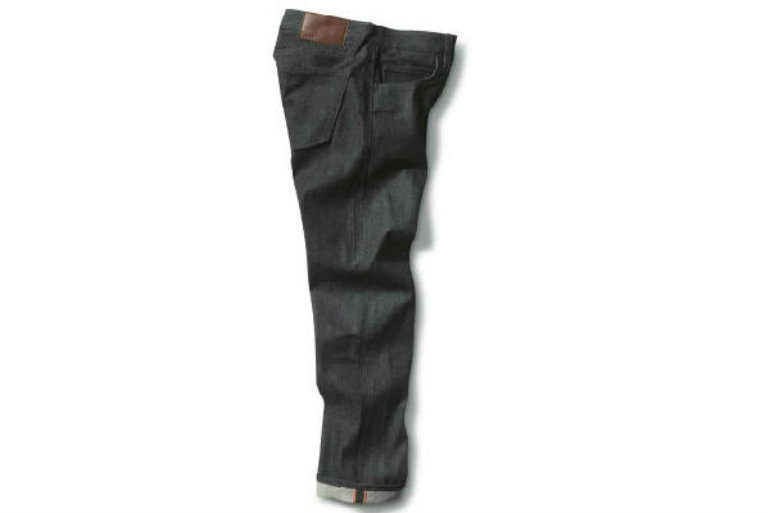 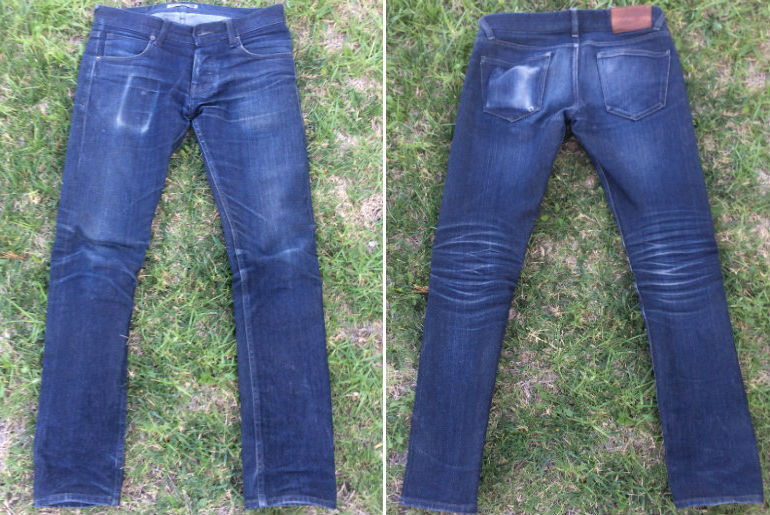 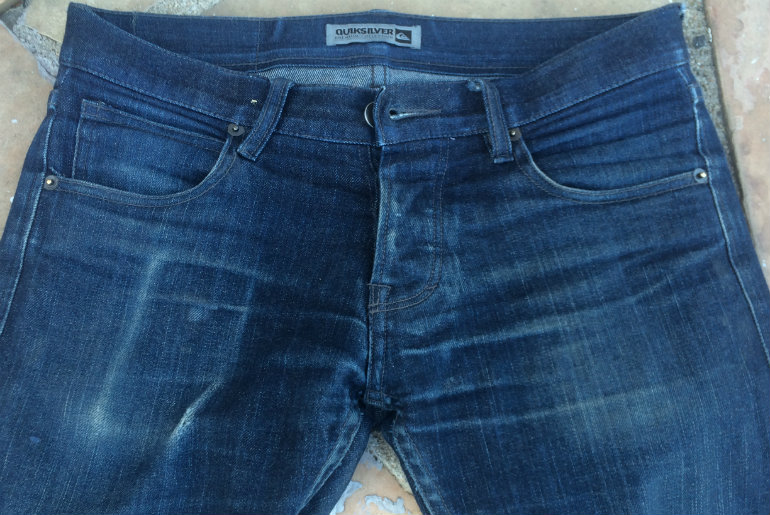 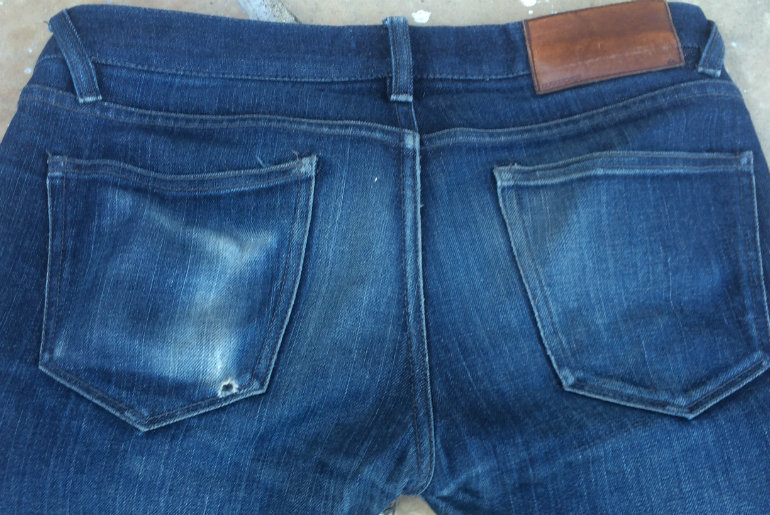 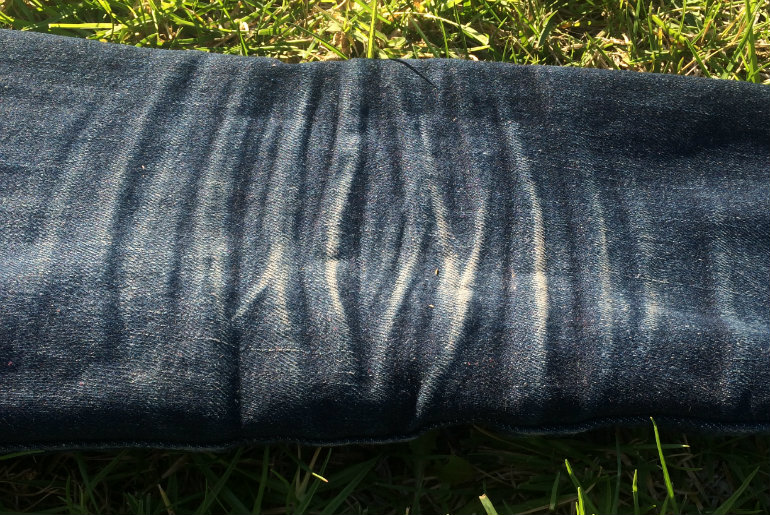 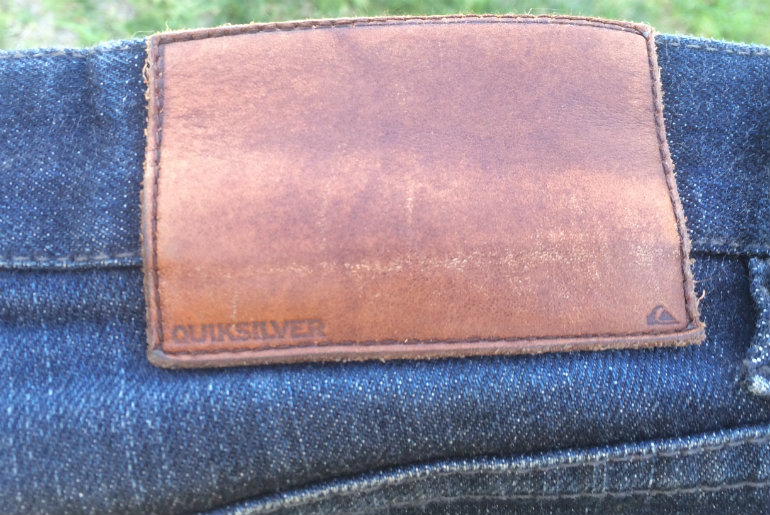 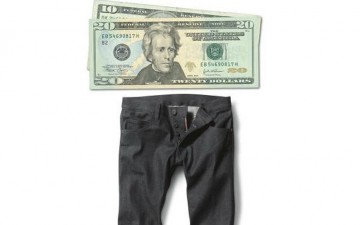 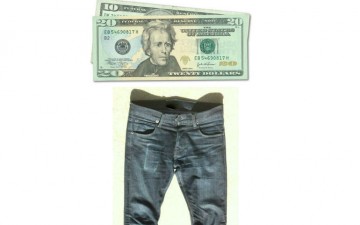 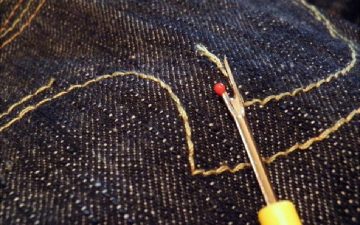 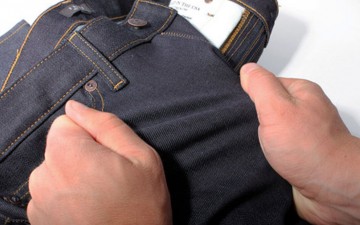