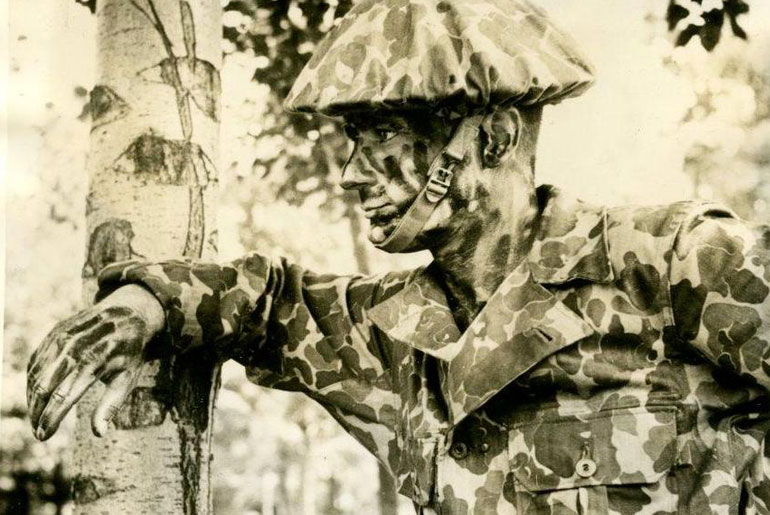 Understanding Camo: The 13 Patterns to Know

The word camouflage is said to have originated from the Parisian slang term camoufler (meaning “to disguise”) after the French army began employing artists to paint their artillery and observation posts in the same patterns as the forest during World War One. Since that time, military organizations around the globe have invented hundreds of different camo patterns to give their troops a tactical advantage.

Camo gradually folded into civilian dress when Vietnam veterans wore their military fatigues back home protesting the war. By the late 80s, everyone from Tommy Hilfiger to Yves Saint Laurent was integrating some form of camouflage into their lines. 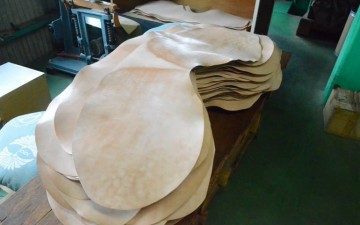 How Leather is Made – The Complete Breakdown

The explicit military purpose of camouflage may be to blend in but in fashion it’s the exact opposite.The fractal greens, browns, and greys were edgy and the chaotic pattern that disappeared on the battlefield couldn’t stand out louder in the urban jungle. While most company copy simply describes their fabrics as “camo” it’s anything but a standard design and comes in all sizes, shapes, and colors.

Read on for a primer on the stories behind the most popular types of camo and how designers have incorporated them today. 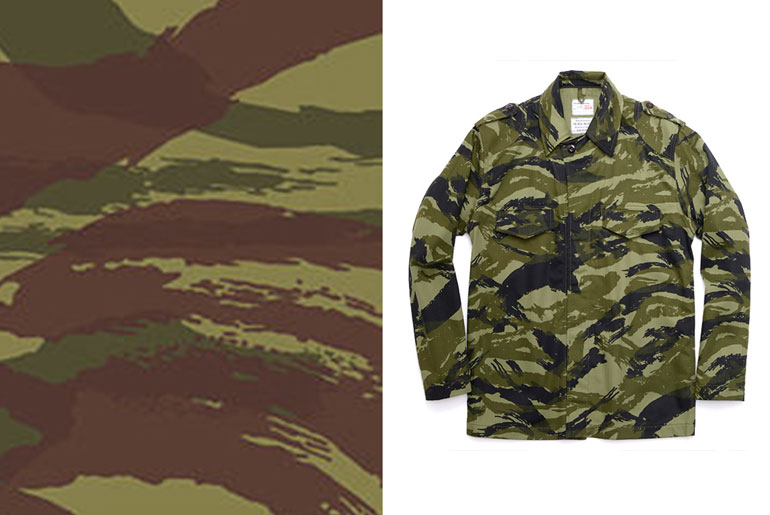 Brushstroke camo was developed originally by British paratroopers in WWII, literally using large brushes to paint different swaths of colour over their khakis before jumping into enemy territory. This homebrew pattern was a favourite of British special forces through the 1960’s because each soldier could customize his kit to his surroundings. 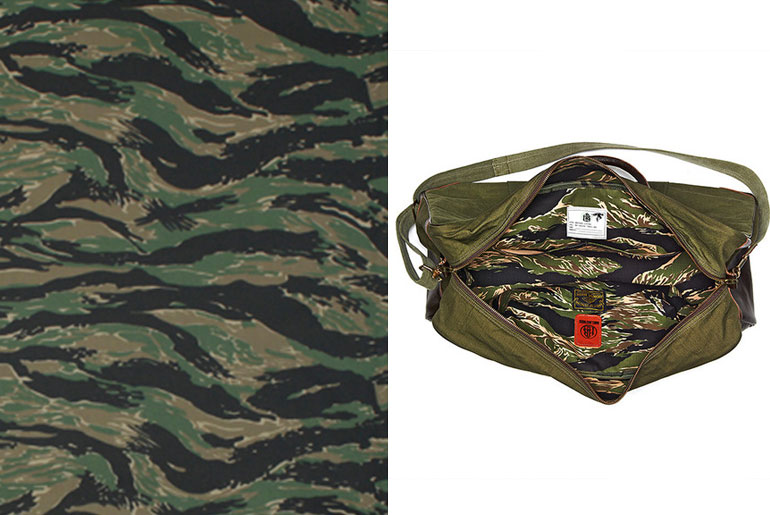 The Tigerstripe pattern is a Brushstroke variant developed by the Vietnamese in the 60’s. It started as a locally made reproduction of the pattern worn by French colonists but was soon adopted by the majority of the Vietnamese Marines. The striped overlay of blacks with browns and greens made Tigerstripe particularly effective in the bamboo-rich rainforests of Southeast Asia, so much so that American special forces began wearing the same patterns by the end of the war. The pattern has come full circle now as French brand A.P.C. are bringing it back in their F/W 13 collection. 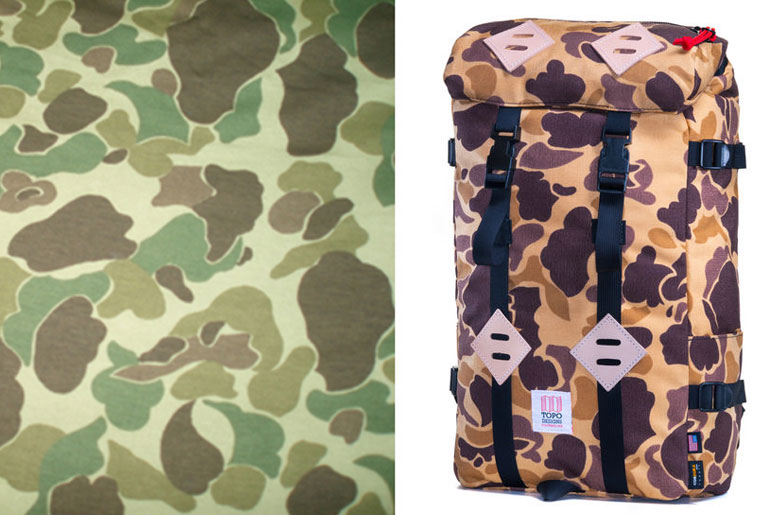 Duck Hunter was a favorite amongst, you guessed it, duck hunters from the 1960’s through the 1990’s but was originally known as US M1942–the camo used by American troops in the Pacific Theatre during WWII. Duck hunter has a solid background color with large splotches of at least two other colors overlaid on top. 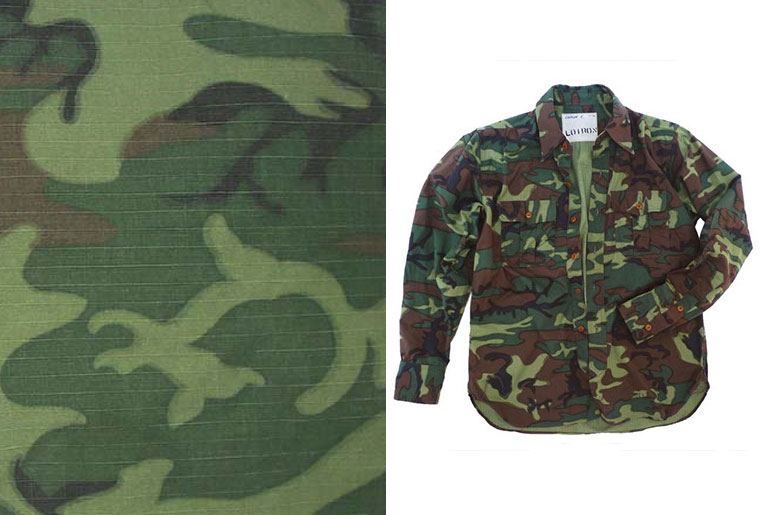 In 1948, the US Army Engineer Research and Development Laboratory (ERDL) designed a general purpose forest pattern that would mimic the browns of leaves, the greens of grass, and the blacks of twigs and branches. ERDL is basically the grandfather of all camouflage patterns in the latter half of the twentieth century, most notably for its direct descendant, the US Woodland. 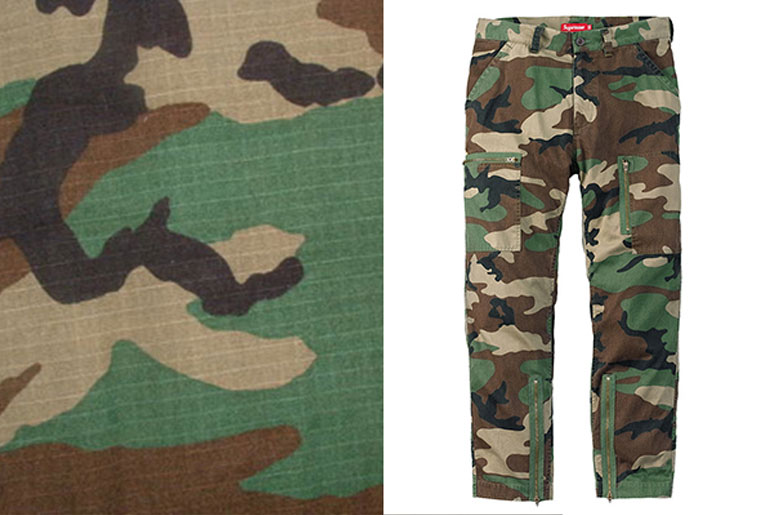 US Woodland is probably the first pattern that pops into your head when you think of camo as it’s easily the most duplicated and modified pattern ever invented. The four-colour design simply took ERDL and enlarged the pattern by 60%. It was the Battle Dress Uniform pattern for almost all American armed forces from 1981 through 2006 and is still in use by about almost a quarter of all militaries around the world. 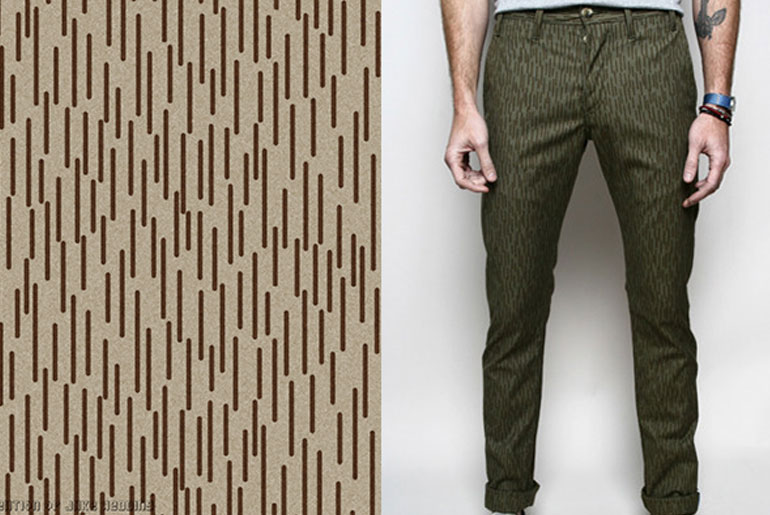 Rain camo incorporates lots of vertical lines against a solid background to evoke the image of falling rain. The German Airforce experimented with early rain camo in WWII but its heyday came during the Cold War when it became standard issue for almost every Warsaw Pact country in Central Europe. Rogue Territory brought the pattern back into relevance a couple years ago with a series of pants and shorts made from deadstock East German twill. 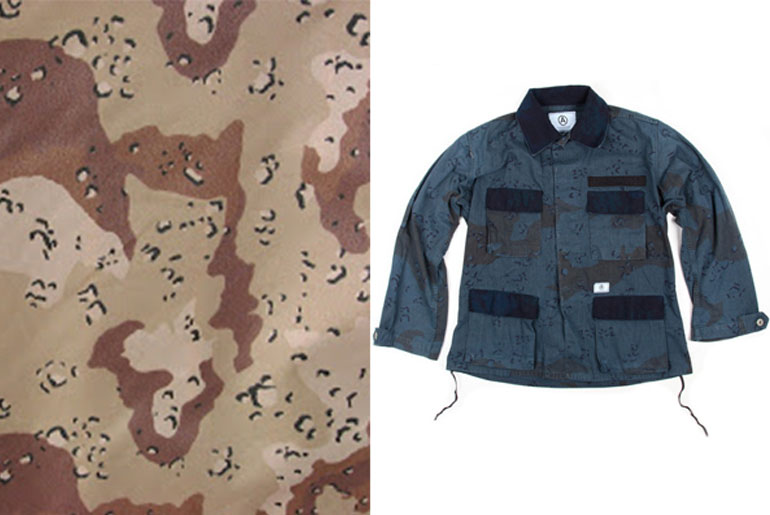 Chocolate Chip is a six colour pattern originally developed by the US Army in 1981, the name comes from the black spots designed to mimic rocks that give the pattern a cookie dough look. A favourite for desert warfare, the pattern has been adopted by militaries from South Korea and Iraq to all over Africa. 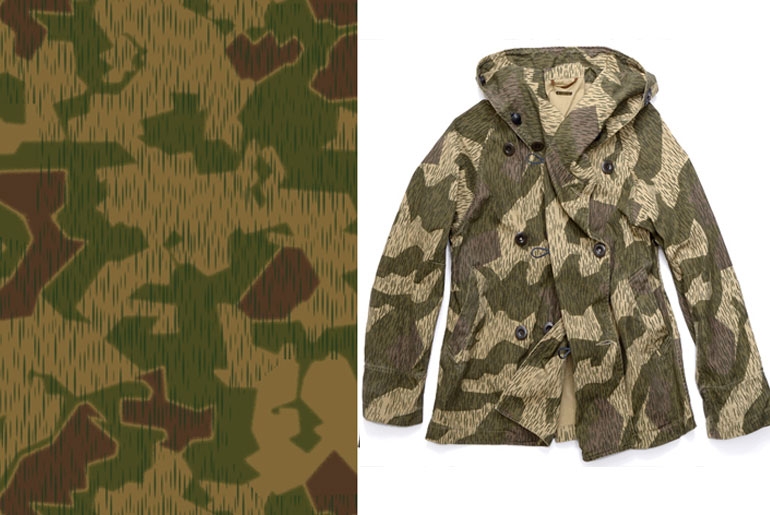 This design may look like something you’d see on an Ikea shower curtain, but the Splinter pattern is another German Airforce invention from WWII and describes the angular geometric shapes that look like splintered glass. The Luftwaffe’s design faded from military use shortly after the end of the war, but it’s Bauhaus aesthetic has made it a favourite of minimalistic labels like A.P.C. 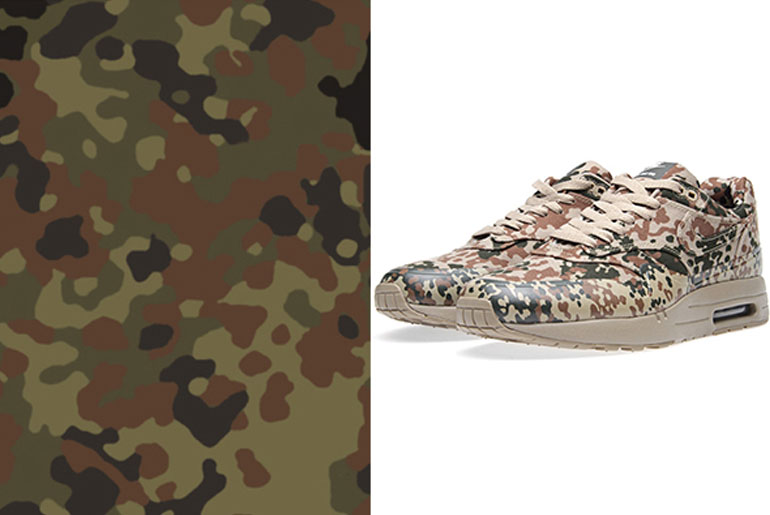 Flecktarn won a West German Army contest for designers in the mid-70s and soon became standard issue for German troops. The leopard-like pattern took Europe by storm in the same way as Woodland did in North America. As such, Flecktarn is often too commonplace for many European designers looking to stand out, but the mystique of the pattern remains intact in North America. 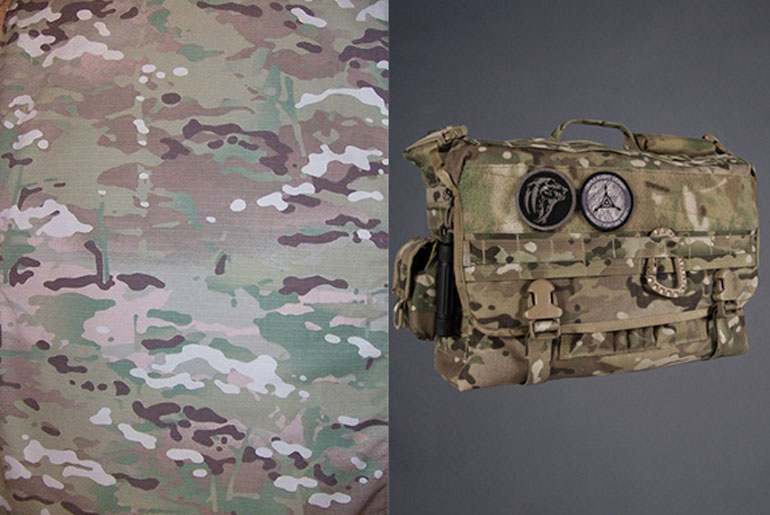 Designed to blend into any type of terrain, weather, or lighting condition, Multicam is the all-season-tire of the camo world. Crye Precision developed Multicam in 2003 for American troops in Afghanistan who regularly move between alpine and desert but needed one set of fatigues. The iguana-like pattern has over a hundred separate image layers and several spectrums of colour composited into every swatch so that the observer’s eye sees the colours that are most like the environment. This cutting edge design is a favourite for more technical outfitters. 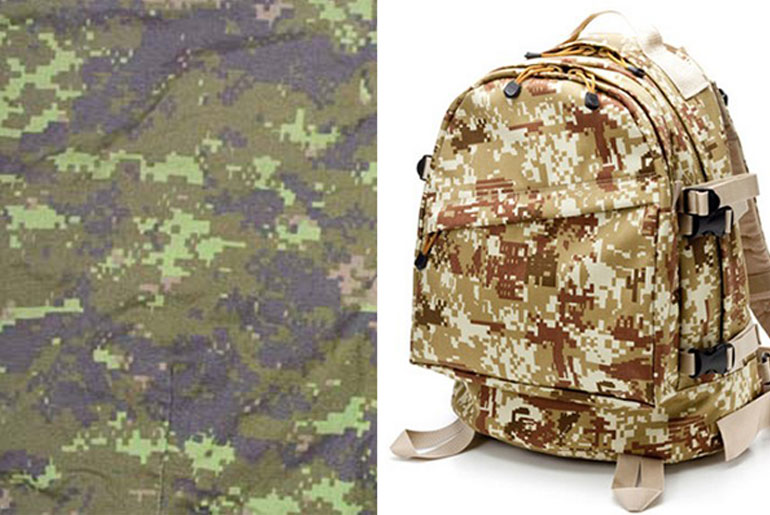 Pioneererd by the Canadian forces in 1996, CADPAT was the world’s first digital camouflage pattern. Traditional camouflage like the ones listed above use macropatterns which have sharp outlines and are easier to see. Digital camo, however, uses pixelated micropatterns which blur together and dither at a distance making them more difficult to pick out. This breakthrough revolutionized military camouflage and almost all modern armed forces use some form of pixelated camo. 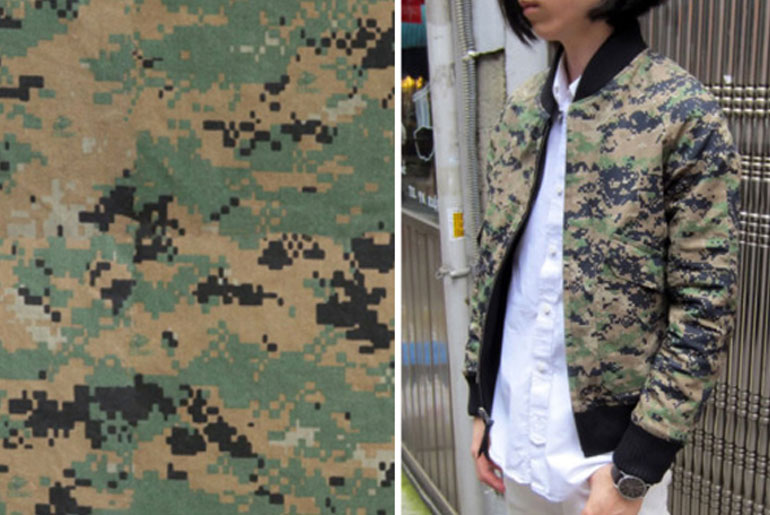 MARPAT was the United States Marine Corp’s first digital camo and was implemented throughout the entire Marine forces in 2001. The colour scheme seeks to update the US Woodland pattern into a pixelated micropattern. Although the Marines will tell you they came up with it independently, CADPAT’s influence is pretty obvious. 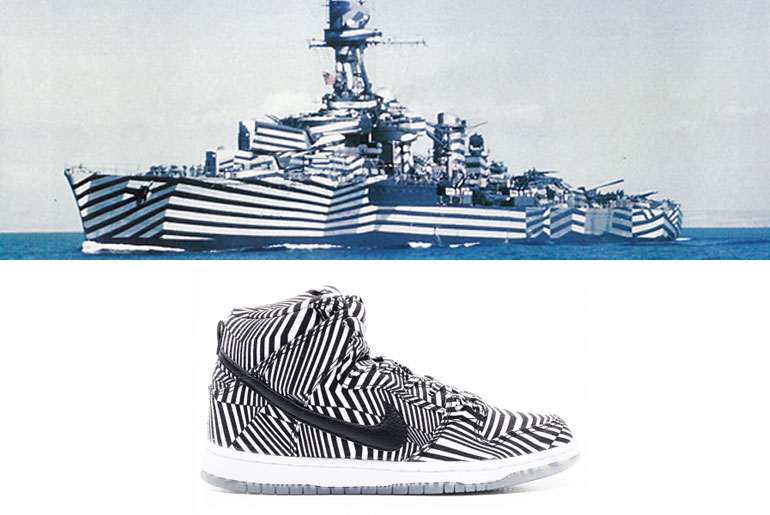 Dazzle is kind of the odd duck in this list, as it was not designed to hide its wearer’s location but its movement. It operated off the same principle as zebra stripes and “consisted of complex patterns of geometric shapes in contrasting colors, interrupting and intersecting each other.” Naval scouts once had to use their eyes to determine the location and the movement of enemy ships and dazzle camo make speed, direction, and even size much more difficult to discern. Over 2,000 ships were dazzled in WWI but the design faded away during WWII as SONAR became much more prominent. 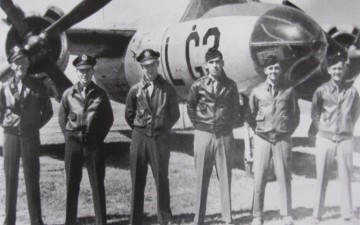 Know Your Jackets: The Stories Behind 9 Pieces of Classic Outerwear 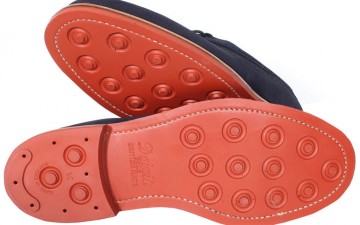 Know Your Soles: The 8 Most Common Options 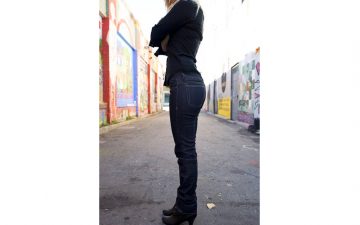 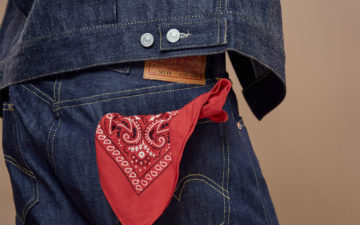 A Brief Buyer’s Guide to Bandanas