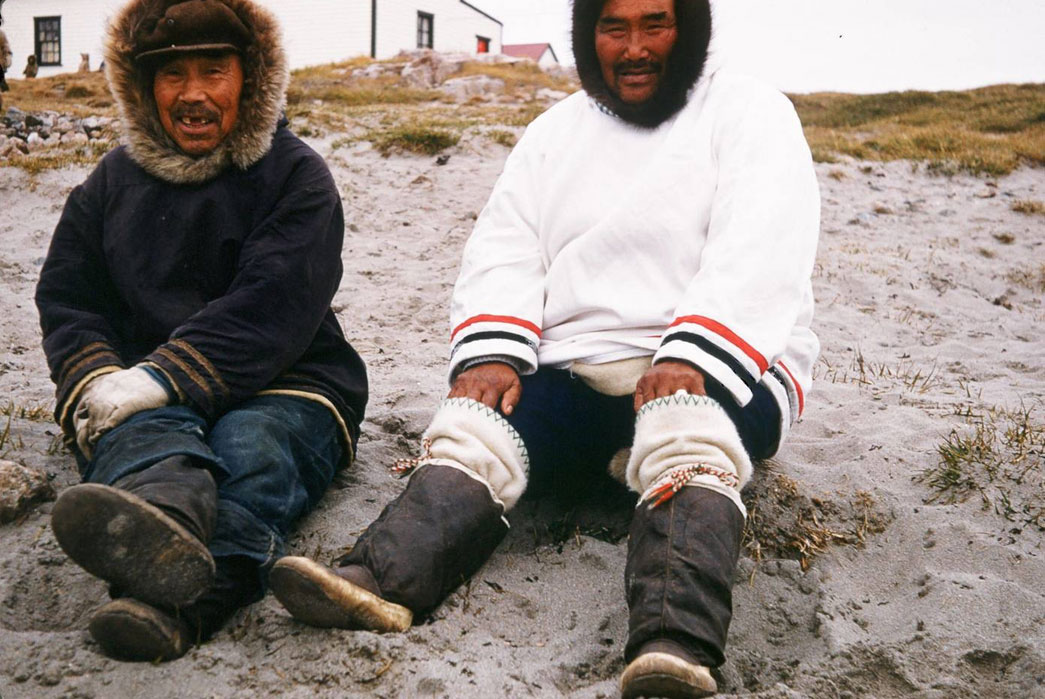 From Amauti to M-51: The Complete History of the Parka

The parka is a true wardrobe staple when the colder months take over, but what exactly defines the parka, what are its origins and what makes the parka-style coat such a popular winter option?

The Origins of the Parka

The word “parka” supposedly comes from Nenets, a language of the Samoyedic people of the Ural Mountains in the northern part of modern Russia. Some speculate though that the term is derived from the Aleut people and thus took shape via the Russian language instead — the word in Russian simply translates to animal skin. It’s hard to know for sure, but the word didn’t enter the English dictionary until the late eighteenth century.

As legend has it, the parka was invented by the industrious, Arctic-bound Caribou Inuits — a people residing in what is today called Nunavut, the biggest and most northern state of Canada — who originally referred to the now-ubiquitous cold-weather jacket as an amauti. 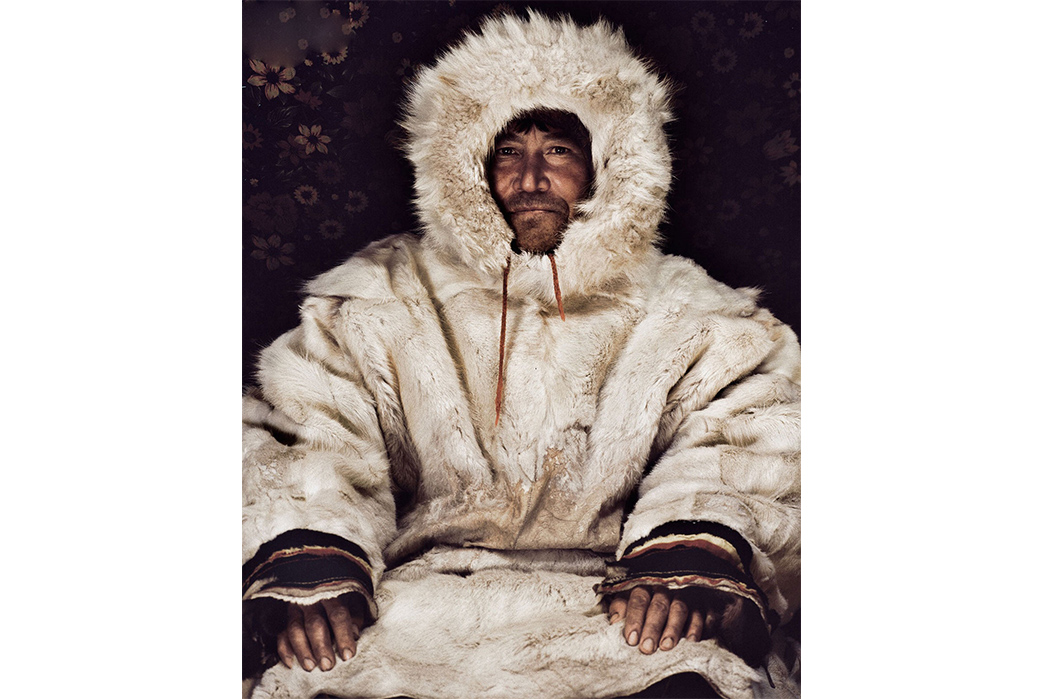 A stunning example of a traditional Inuit parka. Image via Isaora.

However, the amauti is only one variation, and across the Arctic Circle there have been numerous examples of original parkas, each relevant to the diverse indigenous tribes of the Arctic Circle and each made to address different elements, such as climate, animal population, local industry, tradition, etc.

But aside from the near-impossible question of “who wore what first”, two things are certain: 1) the original parka looks nothing like the parka we know today, 2) the parka-style overcoat is (and has been for centuries) a popular choice of clothing for anyone roaming the Arctic Circle, due to some of the harshest weather conditions on the planet. So let’s take a closer look at some of the more traditional parkas, and what made them indispensable in cold climates.

Unlike the military service parkas from WWII, the traditional amauti didn’t have an open front, and, as such, was more similar to what we know today as an anorak, another style of jacket with Arctic origins. Amautis were typically made of caribou or sealskin, densely packed with outward-facing hollow fibers of hair. As previously explained in our article on linen[linked], the hollow core of the hair works as an insulator to trap heat, and the trait is a natural adaptation for many animals living in sub-zero degrees, such as polar bears, caribous, alpacas, etc.

But these traditional parkas did more than just keep the wearer warm; they typically had little hoods on the back to hold a child, utilizing both the warmth of the design and the body heat of the adult caregiver to keep the child warm. Because of this feature, women originally wore the traditional amauti, although men of the era would wear a similar style of parka without the “baby hood.” Underneath the amauti, the Inuits would typically wear a second jacket, of the same fur, with the fur facing inwards for further insulation. This is called an atigi. The traditional parkas would furthermore include a hood trimmed with wolverine fur, a natural moisture repellent.

Certain types of Inuit parkas would require regular treatment with fish oil in order to maintain their water resistance, but in some tribes, like the Aleutian, they made their parkas (called a kamleika) from intestines of mammals, typically seals or sea otters, which have naturally water-resistant properties. Given the primitive means of the tribes, these traditional parkas would require both hunting and sewing skills in addition to some patience, as it could easily take a month to finish a single parka.

Although traditions are still kept up in some tribal communities around the Arctic Circle, it’s no surprise that most modern parkas are no longer made solely from animal skin and fur. But now that we’ve learned a bit about traditional iterations, let’s lay down some basic features that denotes a parka, and features that are relevant to the modern day interpretation:

The length and capacious cut of the parka, its many cargo pockets, the weather-resistant shell and adjustable fur (or pile) lined hood all make it a practical companion in the field. So, it’s no wonder that the parka-style overcoat was adopted by the US military in the mid-twentieth century as the optimum choice for pilots and foot soldiers stationed in cold climates. Both a great insulator and a practical storage option for food, medical supplies, ammunition, etc., the parka-style overcoat was the best bet for keeping warm in spite of the harsh elements the soldiers were facing. It was roomy enough to wear on top of bulky military uniforms, too.

The parka-style overcoat was issued in various versions, both with and without fur, which was later replaced with pile due to wartime rations. The parkas issued to the Army were typically made with a tightly-woven cotton poplin outer shell, and would include detachable liners from around 1943 onwards. The Air Force parkas, however, were different in fit and composition, typically a little bit shorter in the body with an outer shell made from cotton blends (often nylon) and, in some cases, additional down-wadding to replace the use of blanket lining.

And in the United States Air Force, the parka has been a loyal companion for many decades. Before the war even broke out, a Washington-born, civilian outdoor supplier named Eddie Bauer created a flight suit intended for bush pilots stationed in Alaska. The flight suit became so popular with pilots that they would pay for it out of their own pocket, as it was both lighter and warmer than their military issue.

Sparked by the popularity of the flight suit, Eddie Bauer would go on to develop the B-9 Down Parka for the USAAF during WWII, which is still, to this day, a phenomenal example of an extreme cold weather parka. Crafted with a more weather-resistant cotton/nylon-blend, the B-9 is still sought after by collectors. Eddie Bauer wasn’t the only supplier contracted to make B-9’s for the military, but undoubtedly the most famous. 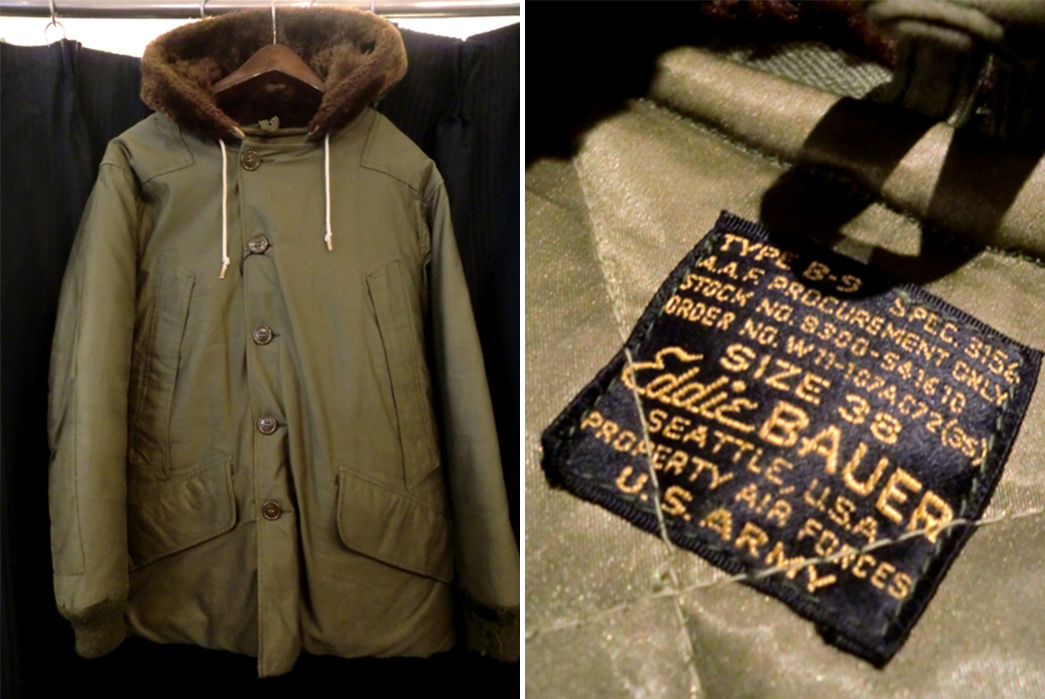 In the late ‘40s, the extreme cold weather parka further developed with the introduction of the N3-B, which came to be known as the Snorkel parka given its ability to zip all the way up, covering most of the face and leaving only the eyes uncovered.

Like the B-9, it was a three-quarters length-style parka, issued to aircrew personnel working in extremely cold conditions, like the low temperatures of open bomber planes at the time. The outer shell of the Snorkel parka was made from a DuPont flight silk nylon and padded with a wool blanket material that could keep the wearer warm in temperatures as far down as -60F (-51C). 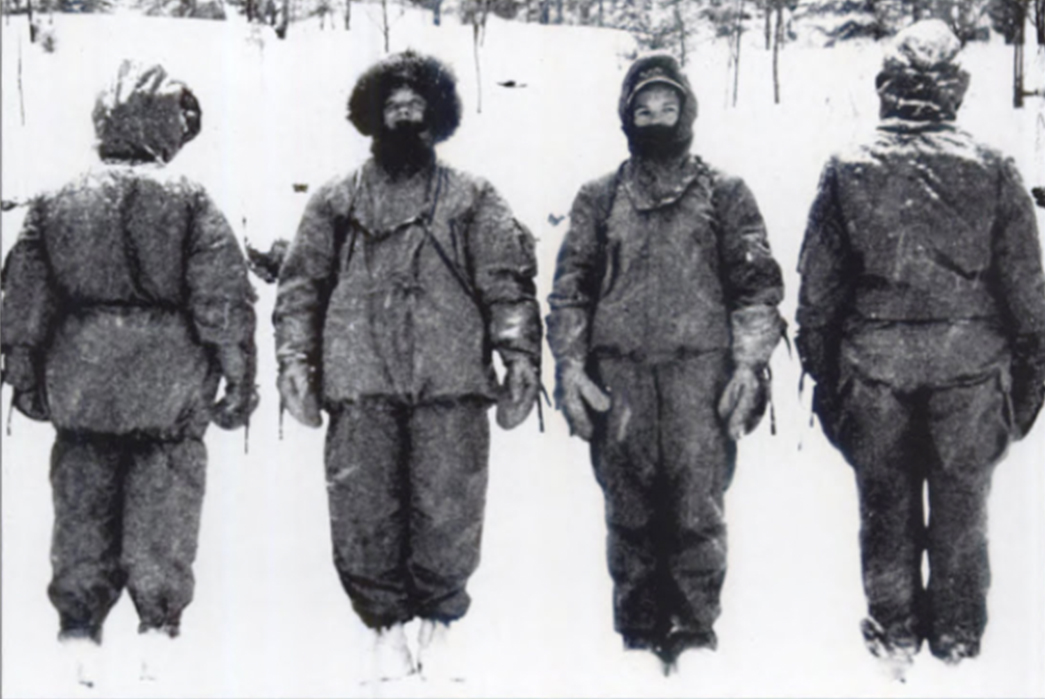 Arctic gear, such as the fur-lined parka (to the left), is being tested by personnel at the Natick Army Labs, Boston, MA, 1940’s

Throughout the ‘50s the field parka developed too, and changed noticeably during the Korean War. Out of climatic necessity emerged the invention of the fish tail, called such because the split tail looked like the tail of a fish. This innovation paved the way for a new jacket design and a new military issue, which became known as the Fishtail parka, a designation that covers three different issues: the M-48 (the first, and only produced for about a year), the M-51 and M-65 (the original’s more famous younger brothers). The length of the fishtail parka was traditionally about knee-length, and thus cut longer than the USAAF parkas. The true innovation, however, came from the drawstring at the end of the fish tail that the soldier could tie around each leg, which trapped more heat and, ultimately, kept them warmer in the cold climates of Korea.

With the end of both the Second World War and the Korean War, these military issue parkas were suddenly available to civilians at various Army Surplus stores. In particular, the mod-movement of the UK found an interest in the M-51 and M-65 styles, but the broader availability also meant that the designs could be picked up by designers who would then go on to develop their own respective versions of the parka.

This widespread adoption eventually led to lighter shell jackets, like the Mountain Parkas made famous by ‘60s Sierra Designs — a hooded, three-quarters length jacket made with a 60/40 cotton/nylon-blend shell featuring many storage options and produced with or without a light blanket lining — and still present to this day. A simple shell parka would prove to be a popular choice as these parkas could act as all-season outerwear, instead of just being a winter option.

Parkas were originally associated with extreme cold weather conditions and were therefore related to outdoor activities such as arctic expeditions, hiking and mountaineering. However, many modern day parkas have been developed with or without fur lined hoods and, in lighter versions, with no wadding or liner, which leaves the additional layering up to the individual.

Compositions have changed too, with the help of new innovation in the field. In 1976, for instance, the U.S. Army Natick Soldier Services Centery (NSSC) helped develop Gore-Tex, which is a very popular weather-resistant fabric used in contemporary parkas, like those made by the innovative Canadian outdoor brand Arc’teryx. But because the term “parka” is more frequently used nowadays, it’s also one that’s been applied to more and more models that are unrelated to the original design elements and characteristics that defined it in the past.

Luckily for those who like tradition, however, there are a long list of brands that stay true to the heritage of the military parkas. Brands like The Real McCoy’s and Buzz Rickson’s both make excellent examples of B-9, N3-B, M-51 and M-65 parkas. And if you want one that’s a little less army-related and available in other colours than sage green, the ‘60s brand Rocky Mountain Featherbed — since bought by Japan’s 35summers — produces some excellent down-wadded mountain parkas, true to the heritage of the brand. 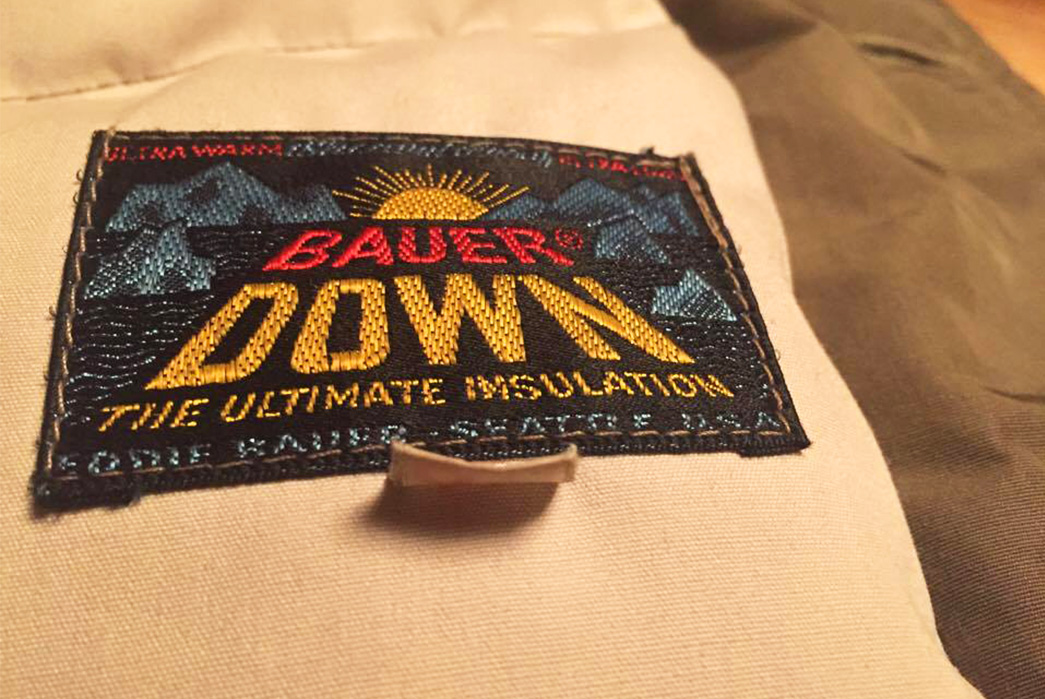 And remember to also look out for vintage Eddie Bauer down parkas, e.g. parkas with the so-called “Sundowner” label. Those can occasionally be picked up for a reasonable sum on eBay, and, if you’re familiar with the collaboration Nigel Cabourn did a few years back, reproducing those pieces in the twenty-first century isn’t exactly cheap. 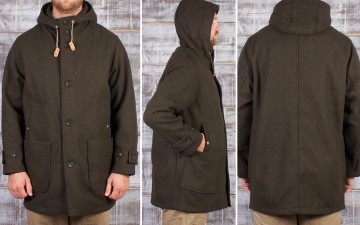 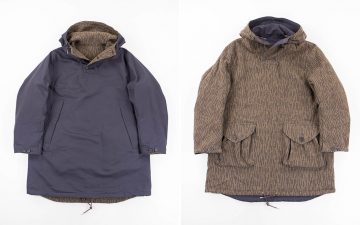 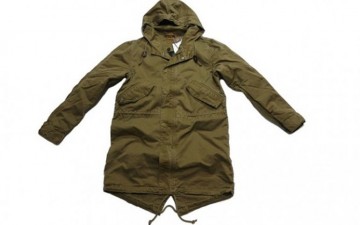 The History of the Fishtail Parka