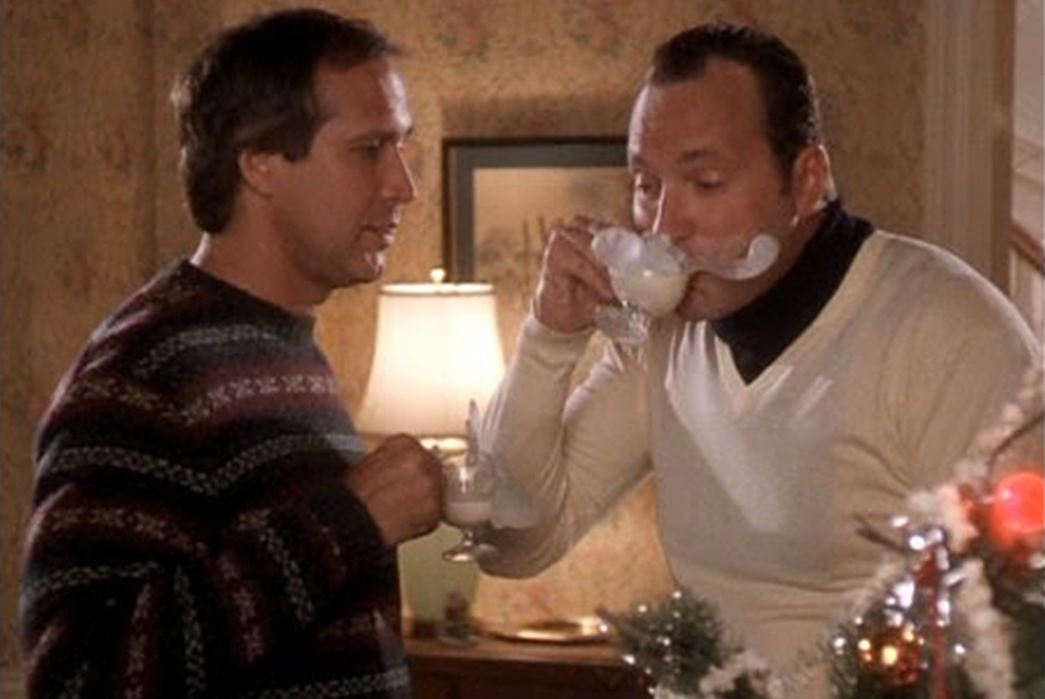 The History of Ugly Christmas Sweaters

If a corpse was fished out of the icy waters off Ireland or the Shetland isles, the identification process would be nigh impossible without the help of the deceased’s sweater. In a time long before fast fashion, one even before the industrial revolution, a fisherman’s wife would knit him a sweater for his work. And as legend goes, each would add her own minor touches to the garment. This was not just a flippant aesthetic decision—a knitter’s signature cable-stitch or pattern could identify her loved ones lest the unthinkable occur.

So when you’re a couple egg-nogs deep at your ironic “Ugly Christmas Sweater Party,” try not to get too melancholy or morbid. Rather, think of the wool sweater’s bizarre evolution, from workwear to leisurewear, which parallels many of the famous items we discuss on Heddels. But unlike those other things, the ugly sweater has the added elements of the commercialization of Christmas and the ugly-as-cool thing that happened in the 1980s. 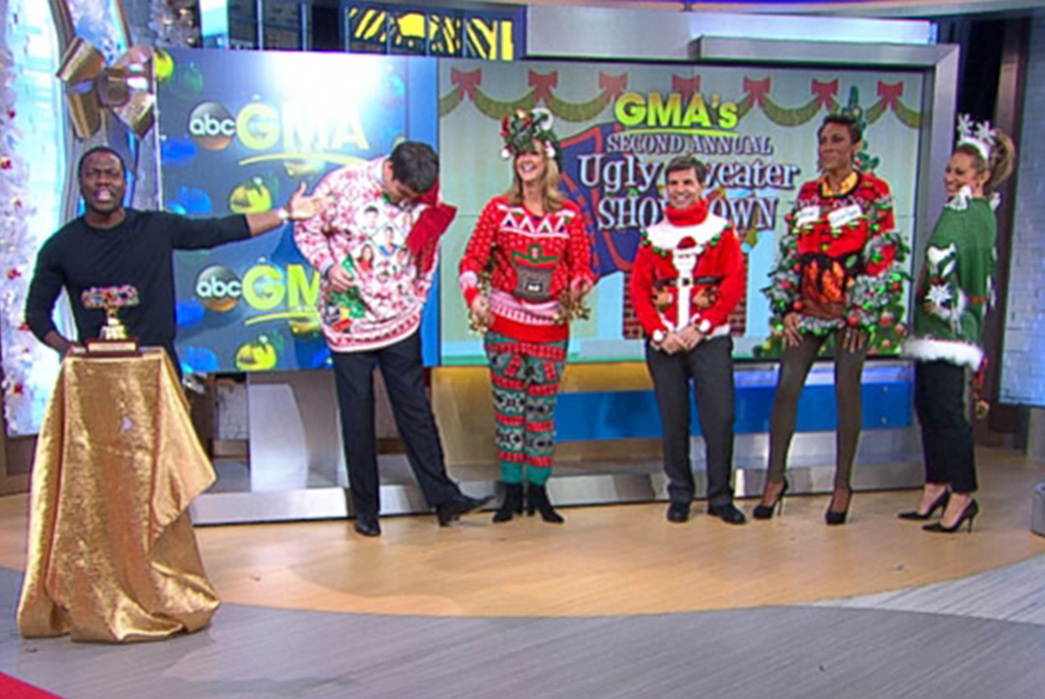 Our pleasantly over-exhaustive article will trace the history of the sweater and the ancient textile from which it’s made, all the way to the current magnum opus of white-people-nonsense that is the Ugly Christmas Sweater.

It All Starts With Wool

Wool is one of the oldest textiles ever used. Early sheep were wooly, not hairy, so they had to be bred selectively in order to produce what we think of today as wool. At some point, humankind didn’t just wear these woolen hides, they started making thread from the fibers. The crimp of wool fibers makes for a dense, somewhat porous fabric. Body heat warms air trapped inside the wool, making it an extremely practical option for those living in chillier climes. Wool is also highly absorbent, which actually keeps the wearer dry. The fibers can soak up nearly a quarter of their weight and still keep you warm.

While hand-knitting wool had been practiced for nearly two thousand years, knit tunics resembling sweaters began to appear in the fifteenth century in both the British Isles and Scandinavia. And while much of the current Christmas Sweater literature seems to point to the Scandinavian school as the influence for their ironic contemporary descendants, it’s just as important to give credence to the U.K.’s contribution.

The following are some of the most iconic sweater designs, all of which are, to some degree, used as influences for the modern kitschy sweater. 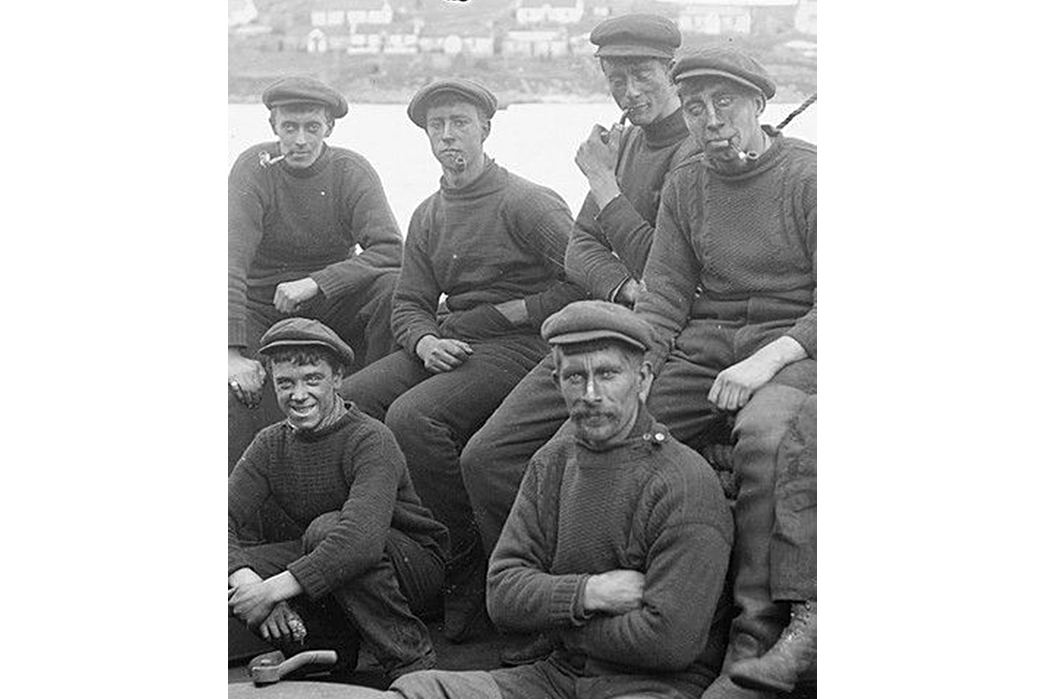 Easily the least festive of the Christmas Sweater’s ancestors, the Guernsey is important to acknowledge because of its working class roots. In the above picture, the subtle differences between the sweaters is clear, if subtle. The product of home-knitting to identify family members in case of untimely death at sea.

Guernsey sweaters did not experiment with color, only texture. The Guernsey is named after the channel island of its origin and has no seams. It is knitted in the round, so it’s the same front to back and features gusseted arms for mobility and a split hem. 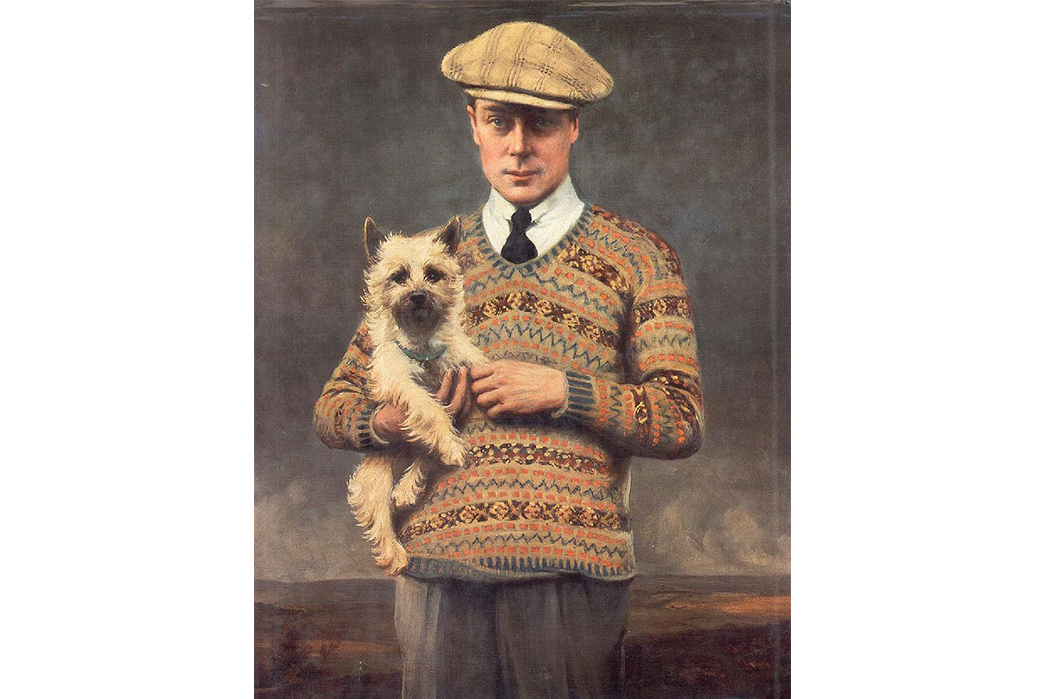 The Prince of Wales wears Fair-Isle. Image via Wikipedia.

The Fair-Isle sweater originated on a small island of the same name near Scotland that is part of the Shetland Isles. This sweater is far more colorful than the Guernsey and quite a bit closer to the tacky Christmas option. The Fair-Isle is also knitted in the round with between two and five alternating colors. 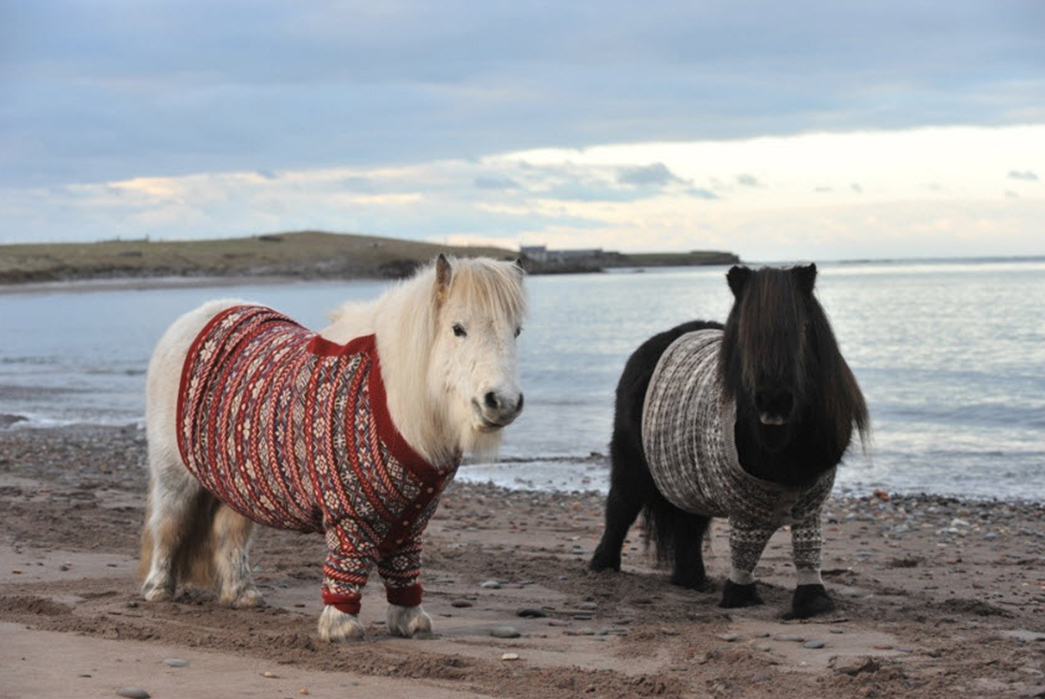 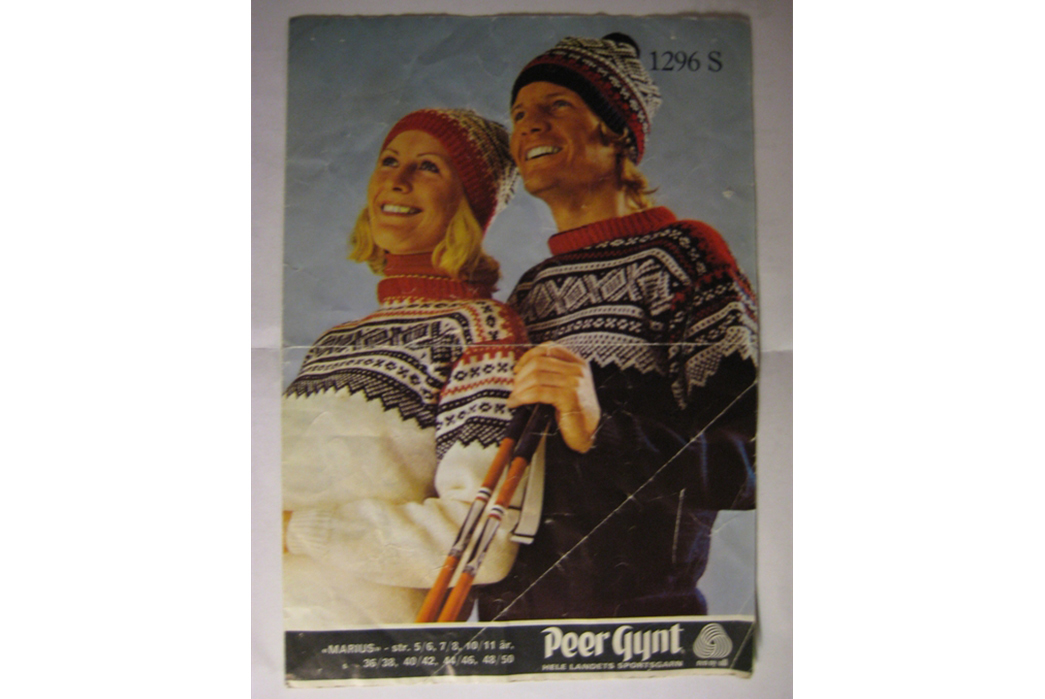 The Mariusgenser sweater is an homage to classic Norwegian knitwear and was designed far later than our other examples, sometime in the 1950s. Traditional Norwegian sweaters were limited to the color palette of the sheep the wool came from, but Marius sweaters often come in red, white, and blue, the colors of the Norwegian Flag.

The Marius sweater and many other Norwegian sweaters would come to be known generically as Norwegian Sportswear, indicating a change from their working class roots to leisurewear for snowy resort-goers. 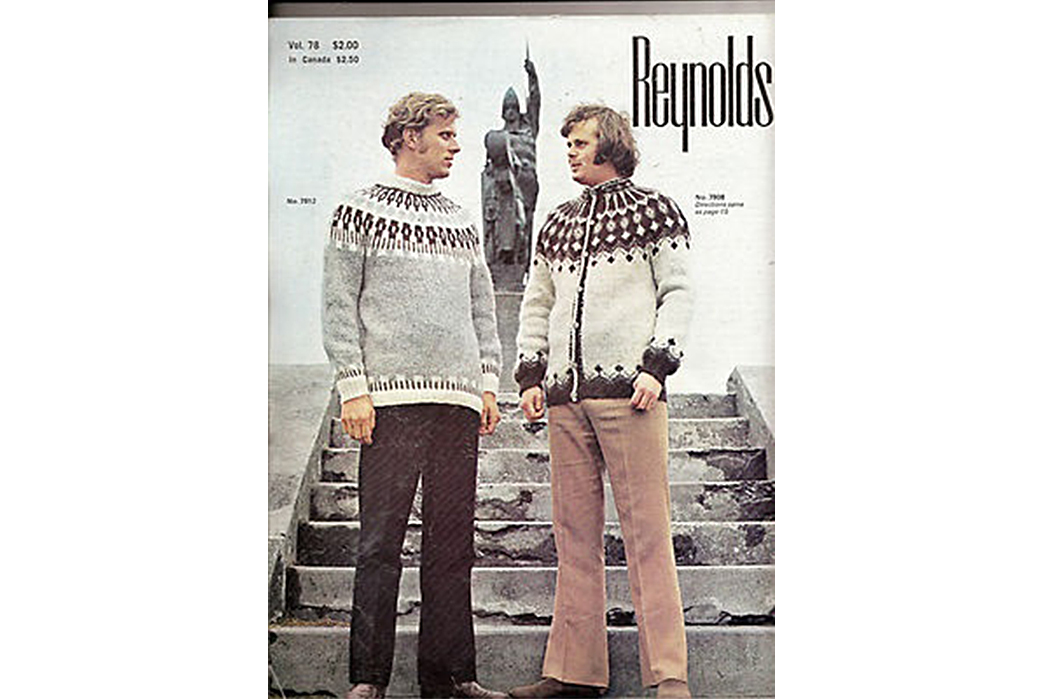 Lopapeysa is an Icelandic Sweater, originating in the mid twentieth century and like its Norwegian sibling, also took cues from a long history of knitwear. The Sopapeysa is identified by the large circular pattern that circles the neck, and oftentimes by the waist and wrists, which match this upper design. 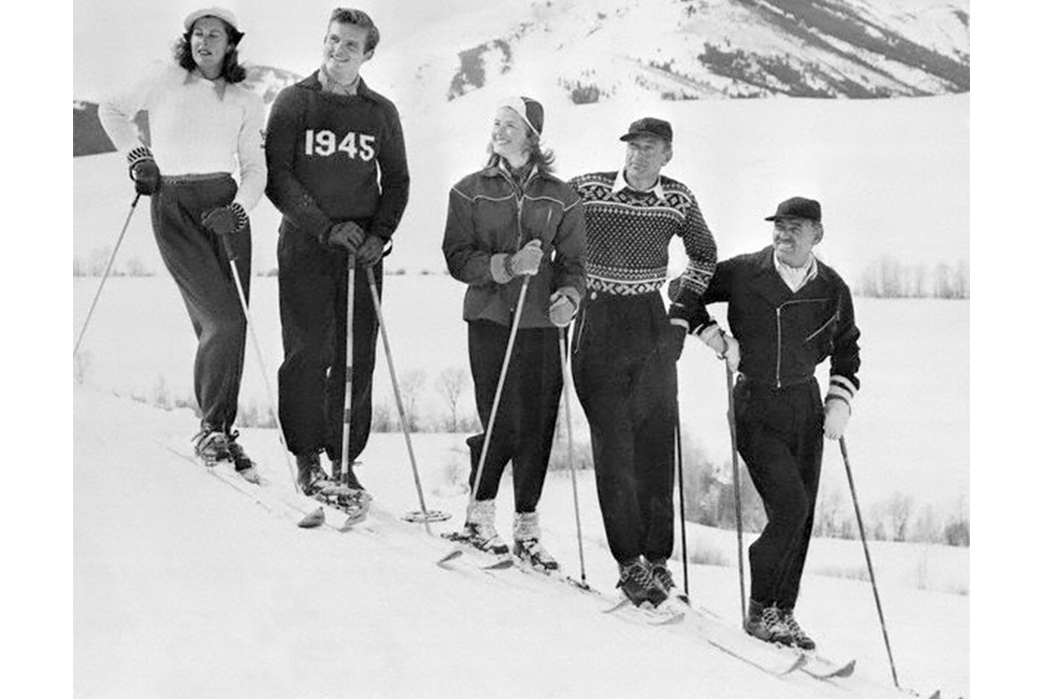 Gary Cooper in a sweater while skiing. With Ingrid Bergman on his left, and Clark Gable on his right. Image via Pinterest.

In the years after World War II, a new emphasis was placed on outdoor recreation. The National Parks received renewed attention, families road-tripped, and servicemen joined motorcycle clubs of various levels of rowdiness. Skiing was just one of these many attractions and seeing the likes of Cooper clad in a Norwegian-style sweater was sure to inspire others to don what was becoming a crucial piece of leisurewear. 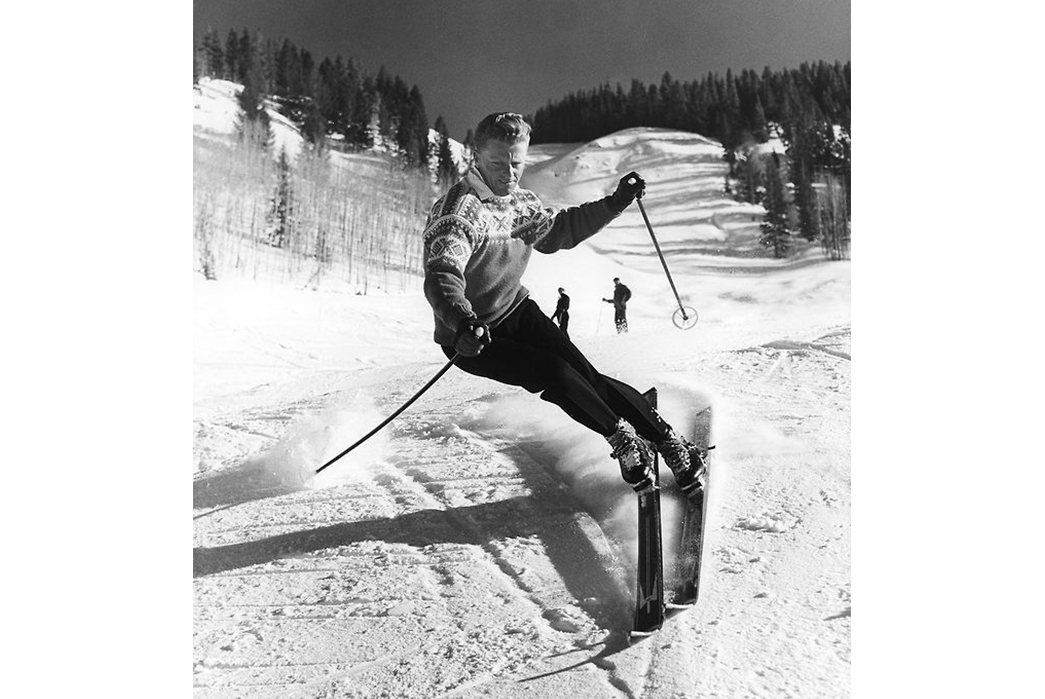 A now-peaceful Europe meant more travel opportunities and the charmingly kitschy sweaters from Iceland and Norway in particular took on a somewhat romantic and foreign air. The formula of movie stars and exotic European locales combined to make the cozy sweater a surprisingly chic fashion choice. 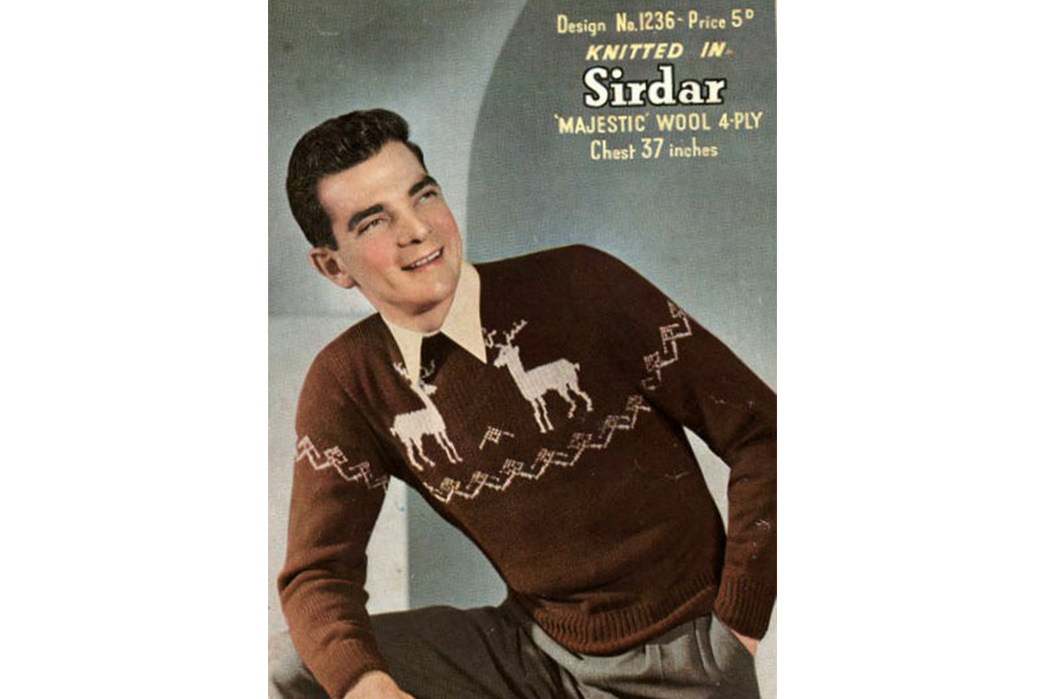 The newfound Scandinavian cool of the postwar era coincided with the democratization and commercialization of Christmas. Before WWII, only the very wealthy had Christmas trees and a sizable feast. Most children were likely to receive a piece of fruit in their stocking for the holidays, which seemed incredibly quaint by the late 50s and 60s.

With Christmas becoming more and more important to more Americans, themed clothing rose to match the demand. Makers downplayed traditional cables and geometric designs in favor of more obvious Scandinavian details like reindeer, which could just as easily be incorporated into the newly-forming Christmas mania. 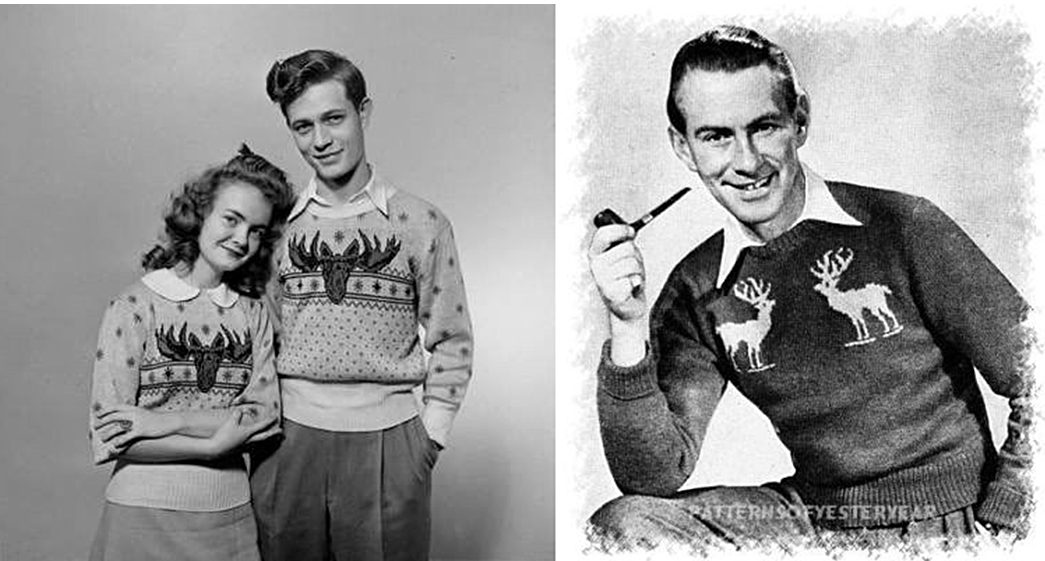 The link that formed between a traditional and practical cold weather garment and the Christmas season was still rather subtle in the postwar era, but by the 1980s, things definitely changed. 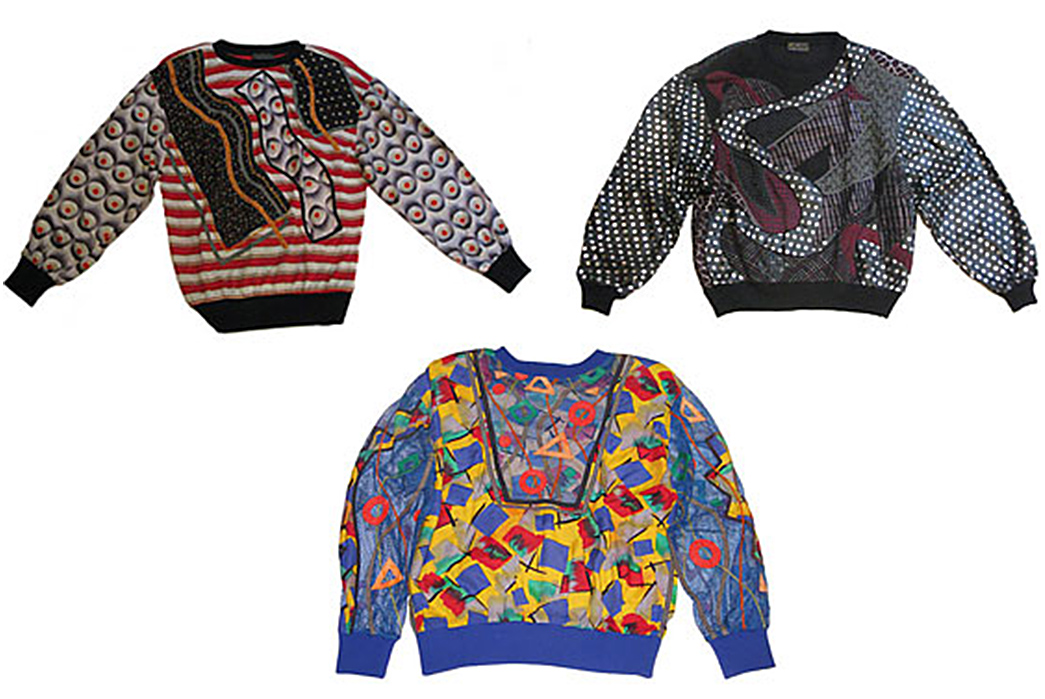 Cosby Sweaters, mercifully without Cosby in them. Image via Collectors Weekly.

The garish sweaters of the now certifiably-evil Bill Cosby had an undeniable effect on the acceptable level of knitwear’s zaniness. Costume designer Sarah Lemire was the reason for this bold choice and both Cosby and Dutch designer Koos Van Der Akker molded the look of Dr. Huxtable over the run of the show.

The 1989 film, National Lampoon’s Christmas Vacation, is frequently cited in the Ugly Sweater history. Although Chevy Chase’s sweaters in the film tend to be more traditional than the over-the-top examples from The Cosby Show, they definitely put the nail in the cool sweater’s coffin.

The craze for Scandinavian-inspired sweaters inspired by the romantic, adventurous notions of outdoor exploration is clearly over by the 1980s. The sweater is fully domesticated. No longer even leisurely sportswear, the patterned wool sweater is now solely a Christmas phenomenon.

The Era of the Ugly Sweater 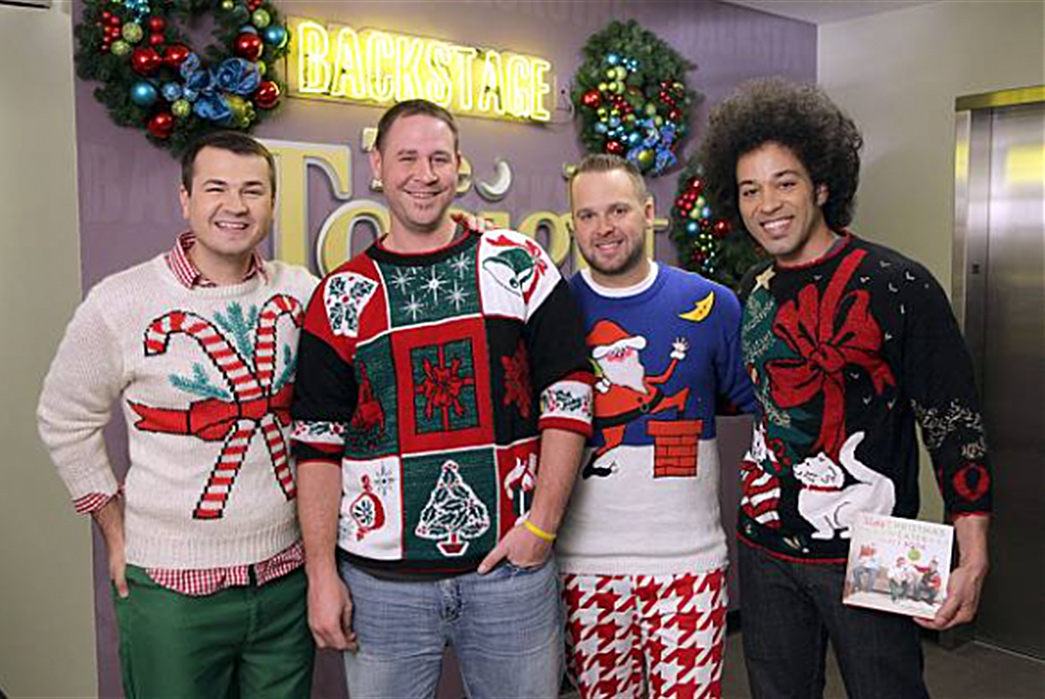 How many grown men does it take to write a book on Ugly Christmas Sweater Parties? Actually three, as it turns out. The book on how to host the perfect ugly sweater party asserts that the first ever Ugly Christmas Sweater party occurred in 2002 in Vancouver. The ensuing media circus about these sweaters means that now more and more sweaters are being made with the specific goal of being ugly. The trend has blown completely out of control from the slightly festive reindeer knits of the 1950s. 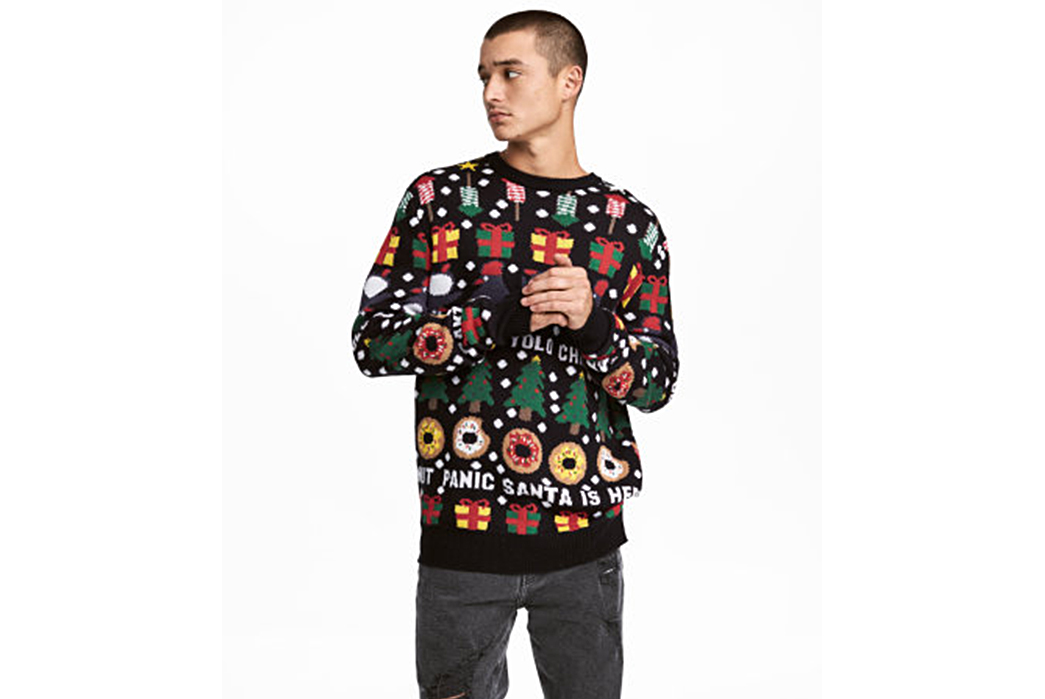 From workwear to leisurewear to 80s excess, the sweater reaches its last stop at the Ugly Christmas Sweater. The fad has become so popular that people cannot even bother to find vintage ones, they can simply go to H&M to buy a ready-made ugly sweater for the holiday party season. But how will anyone identify you if you drown this Christmas season if your ugly sweater is exactly the same as everyone else’s? 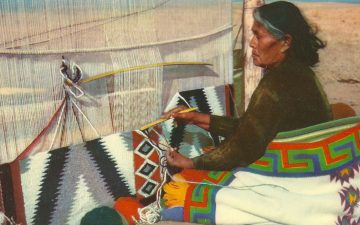 The Full History of Navajo Blankets and Rugs 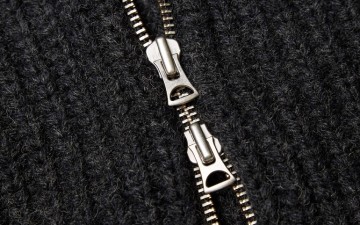 Heavyweight Cardigans – Five Plus One 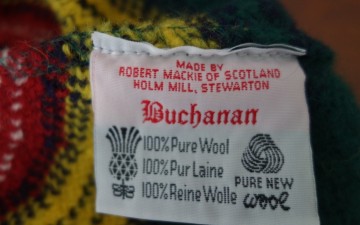 Why Not Wool? – Beneath the Surface 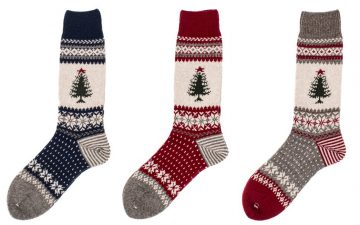