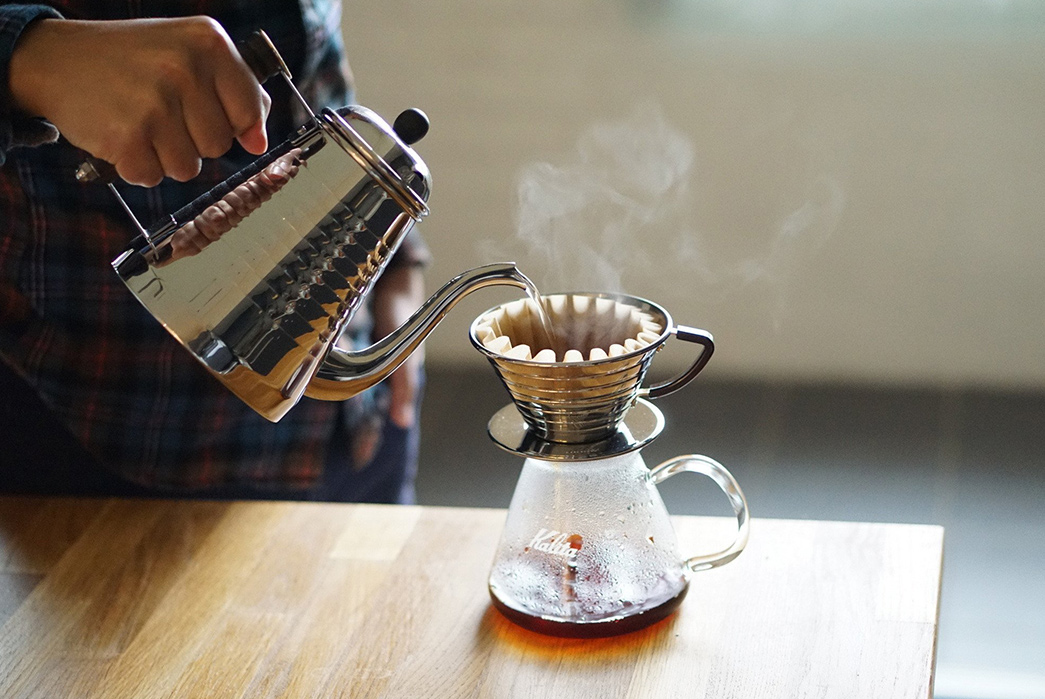 Coffee shops are a cornerstone of culture; a great place to relax, catch up on some work or hang out with friends. But great coffee shouldn’t be limited to your local haunts. There’s a whole range of methods out there that you can use to brew outstanding coffee at home.

It took me years to finally start brewing my own coffee, and I’ve never looked back. In addition to its affordability, brewing at home brings a measure of satisfaction that you just don’t get when you submit to a café. Involving yourself in the ritual of brewing coffee, with its many tactile elements, brings you closer to and connects you with this ancient drink that has been consumed since the 13th century. It can be compared to the ritual of playing a record. Sure, you can stream a track at any time with a single touch on your smartphone—even less if you ask Alexa to do it. But there’s something special about picking out the record, taking it out of the sleeve, and dropping the needle that just makes it that bit sweeter. 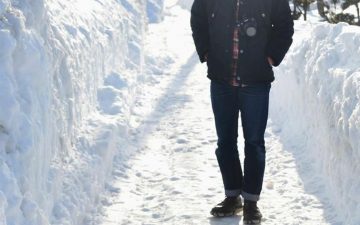 7 Fabrics To Keep You Warm This Winter 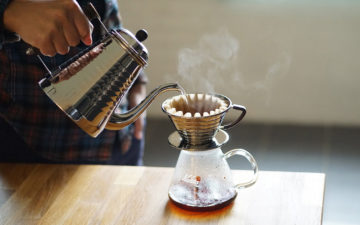 So, if you want to take a step away from the café and brew your own coffee, we’ve taken the time to put together a basic guide of the core coffee brewing methods. 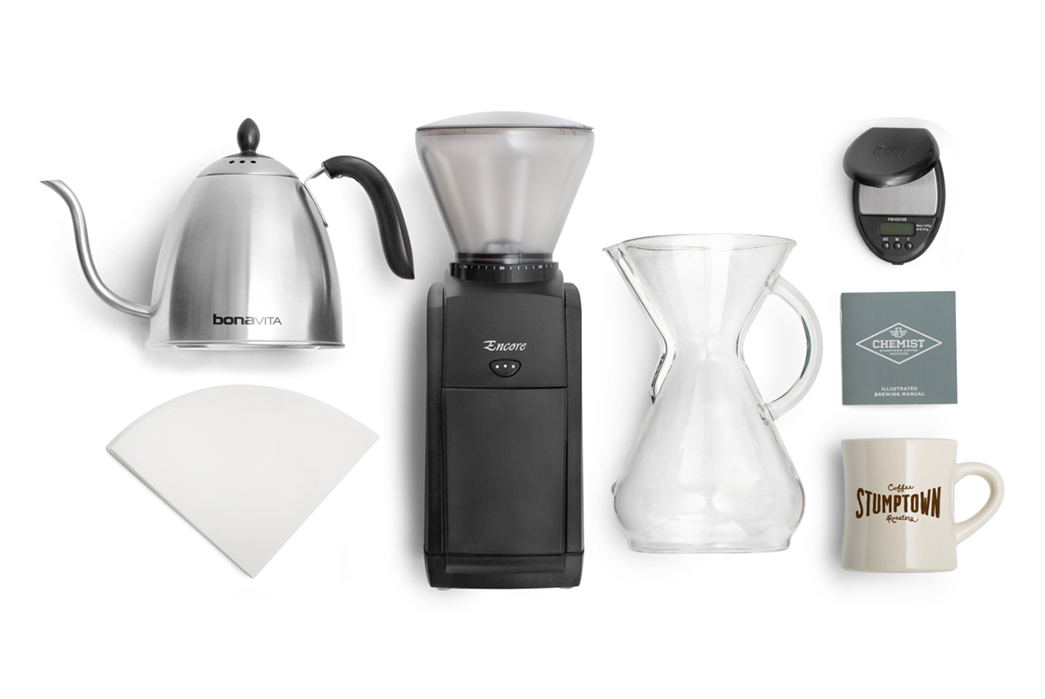 Before you get started, you’ll need a few things: fresh coffee beans, a kettle, a scale (or measuring spoons), and a timer. If you’re not sure where to go for coffee beans, Stumptown, Blue Bottle, and Intelligentsia are among the most widely available roasters of the third wave coffee scene. Specialty grocery stores will usually have a variety of good coffee as well.

Freshly ground coffee is essential to a great cup of coffee. But if you can’t get your hands on a grinder just yet, or you’re hesitant to spend the cash, you can ask your local coffee shop to grind your beans for you until you’re ready to get more serious. Make sure to let them know what kind of brew method you’re using, and they should be able to grind your beans to the right coarseness.

Most of the methods we’ll cover will work well enough with a regular kettle, especially if you’re just starting out. A fancier gooseneck kettle isn’t really necessary unless you want to get into any of the pour over methods.

Because brewing coffee is more like baking than cooking, you want to make sure all of your measurements are in precise. A scale and a timer are ideal. A measuring spoon will do if you don’t have a scale. 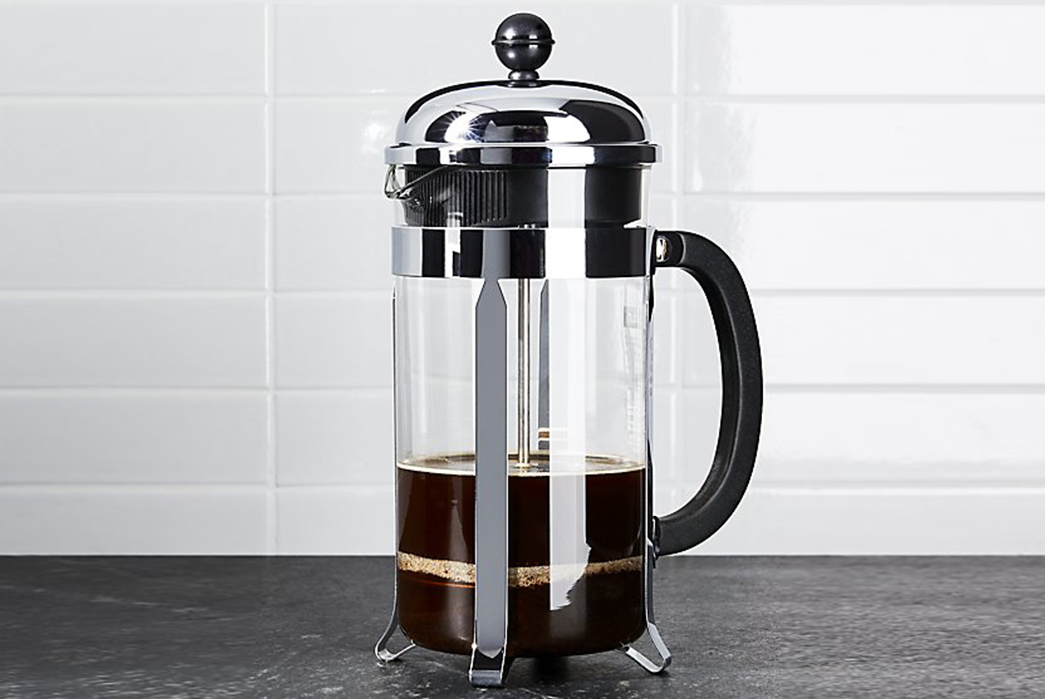 A Bodum French Press via Crate and Barrel

Also known as a cafetiere, the French press is arguably the most simple method in this guide. Coffee is brewed by placing coarse coffee grounds in the beaker and mixing them with hot water into a slurry that is brewed for around two to six minutes depending on the type of coffee. The plunger is then pressed down, allowing its mesh guard to separate the grounds from the brewed mixture and hold them at the bottom of the beaker. Coffee is then ready to pour.

The resulting cup has more body, making it more suited to taking milk if you so desire. Simple and effective, the French press is easy to use and renowned for extracting bold flavors from coffee. And, the integrated metal filter means you don’t have to keep buying paper filters. 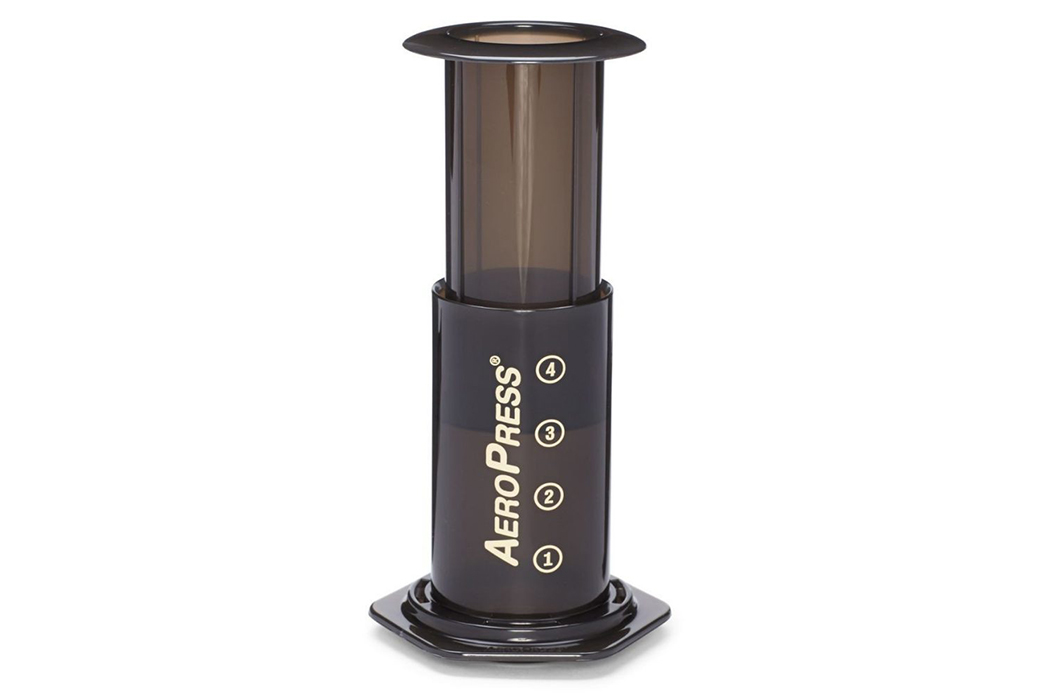 Invented in 2005, Aeropress is a contemporary coffee brewing device composed of a cylindrical brew chamber, a plunger,  and a small piece of filter paper held in a perforated cap. Coffee is steeped in the brew chamber for around a minute, depending on the grind and taste preferences, and then forced through the filter paper straight into a drinking vessel using the plunger. An Aeropress also comes with a stirring paddle and a coffee loader to help pour coffee into the brew chamber accurately.

This method is quick, results in a cleaner cup than the French press, and is a breeze to clean. It’s a great travel coffeemaker, but entertaining guests gets difficult since it’s really only designed to make one cup at a time. 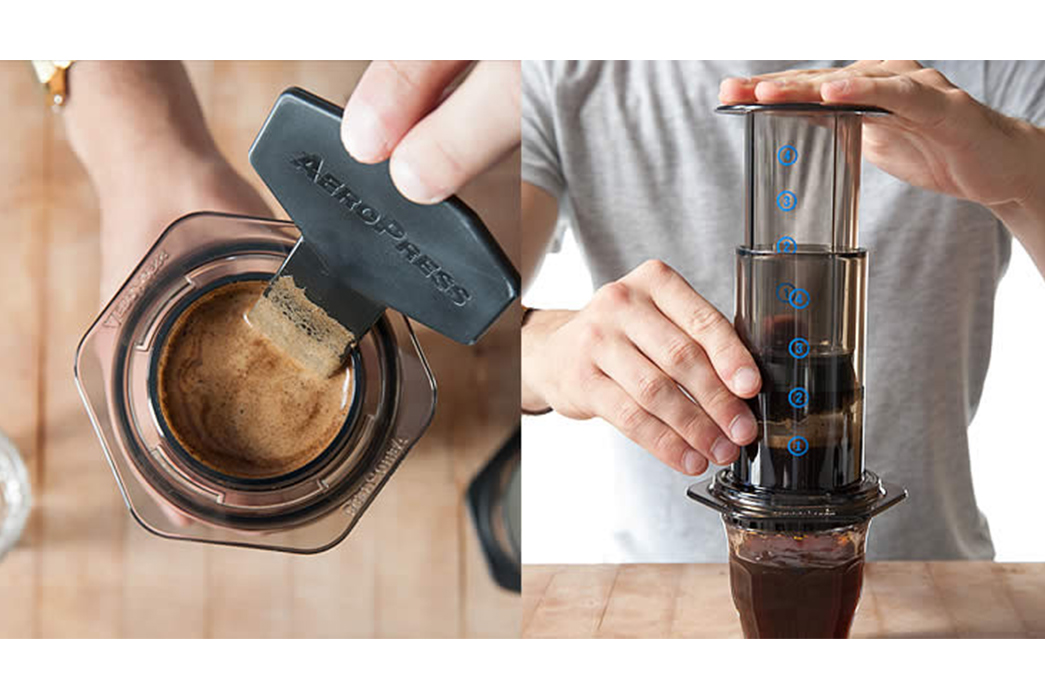 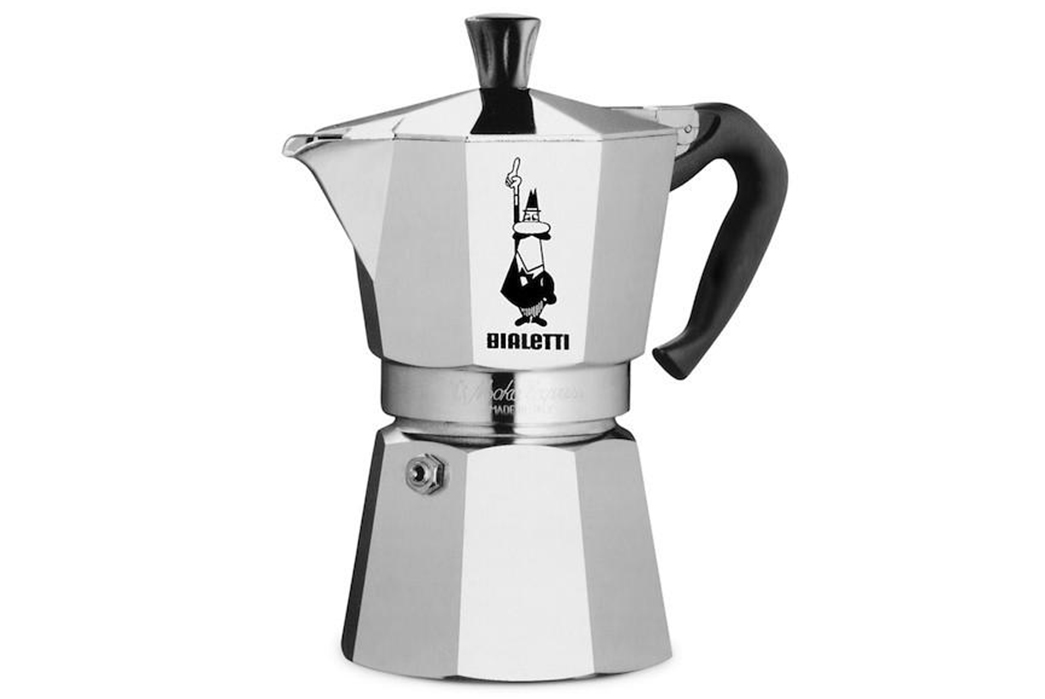 The Bialetti Moka Pot is a stove top coffee that produces a rich, espresso style brew. Composed of a boiling chamber, a funnel-shaped metal filter, and an upper chamber where the brewed coffee ends up. The Moka Pot brews coffee by passing boiling water pressurized by steam from the boiling chamber, through the coffee grounds in the metal filter, and into the upper chamber with the pressure of steam.

As well as a strong flavor, Moka Pots fill your home with the intense aroma of brewing coffee. In addition, these things can earn some nice patina over time as the metal slowly burns and marks, and they’re super easy to clean. 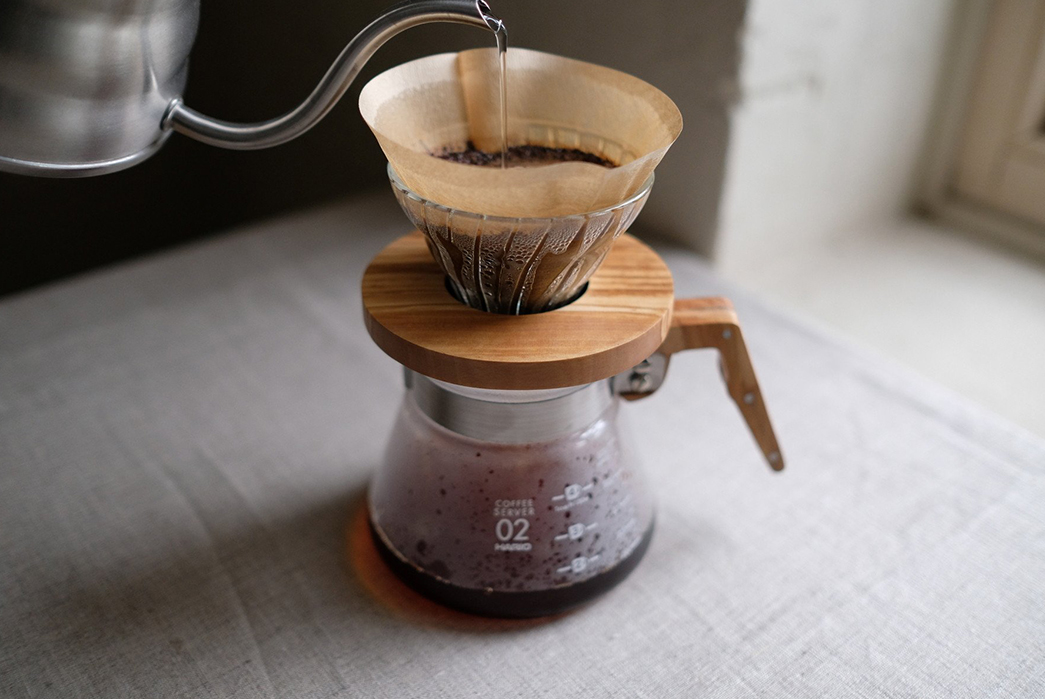 Pour over coffee has increased in popularity in line with the artisanal coffee boom of the past decade. This method is favored by many coffee enthusiasts as it gives the brewer so much control over the taste of their coffee. Unlike a stove top coffee maker which is more hands-off, pour overs have additional variables such as pouring speed, pour rotation, and type of filter used,  all of which allow the maker to alter their brewing recipe.

This method of home brewing can look complicated, but in reality, it’s a fairly simple concept. All you do is take some freshly ground coffee (the coarseness of which will depend on the brew method) and use one of the following brewing systems to pour hot water over the grounds. 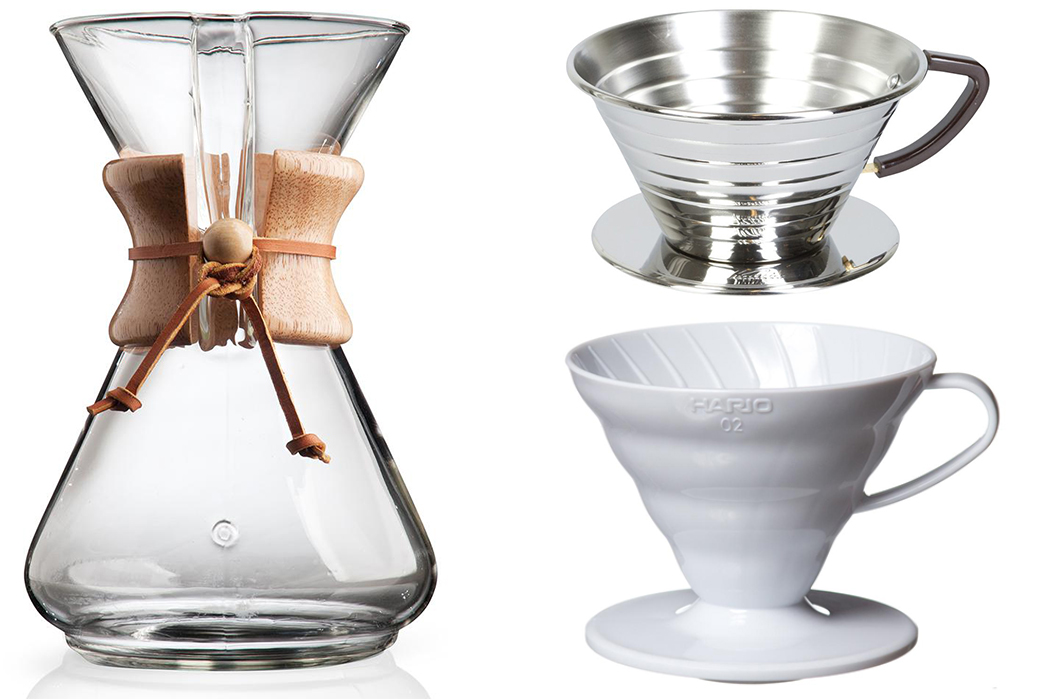 Invented in 1941, the Chemex Coffeemaker consists of an hourglass-shaped glass flask with a wooden collar and disposable filters made of bonded paper. A piece of filter paper is folded, opened out, and placed into the neck of the Chemex. After being filled with coffee grounds, hot water is then gradually poured from a thin-spouted kettle in a slow, circular motion to saturate the grounds. The water then drips through the grounds into the base of the flask.

What’s beautiful about the Chemex, aside from the well-balanced cup it produces, is that it also functions as the serving vessel, allowing you to use it as a coffee carafe. It comes in different sizes as well, so serving a group is easier. But, it’s less suited for traveling.

Coming in ceramic, copper, plastic, or glass, the Hario V60 is a coffee dripper that is placed on top of a cup or carafe and used in a similar manner to the Chemex. The V60 features added ridges to encourage an even water flow during the pouring process that will fully soak the grounds. Its larger hole opening means faster brewing and makes it a harder beast to brew than other options.

You can expect crisp, bright cups with the V60. That is, once you get the method down.

Highly similar to the Hario V60 and used to brew coffee using the same method, the Kalita Wave Stainless Steel dripper has wavy contours to encourage even water flow through the coffee grounds. It differs from the Hario V60 with its flat-bottom filter, which allows the coffee grounds to brew more evenly. As such, it’s easier to handle than the V60.

These cups are rich and full-bodied. Because it’s made of metal, it’s more durable than its glass and ceramic counterparts, making it a go-to for traveling and camping.

Brewing at home can be a relaxing ritual whether you drink decaf or not. With the many options on the table, hopefully, we’ve been able to distill the choices for you and your preferences. Want something quick and clean? Try the Aeropress. Prefer more body with crema? Maybe the Moka Pot is your thing. Or, if you want more control over the entire process, pick up one of the pour over options.

Of course, we’re not eschewing coffee shops altogether. The caffeinated watering hole has its place. But when you want to get start getting more satisfaction out of your coffee, the home is the best place to start. 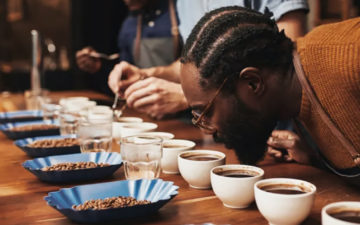 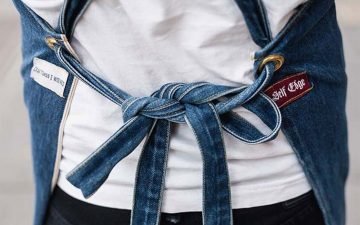 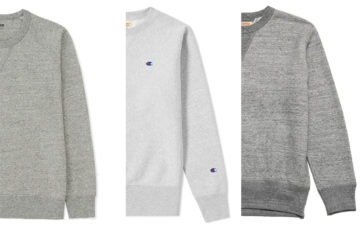 The Three Tiers of Sweatshirts: Entry, Mid, and End Level 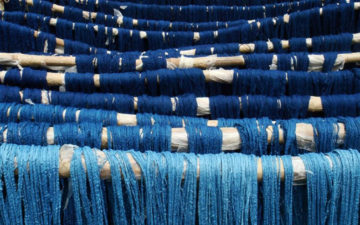