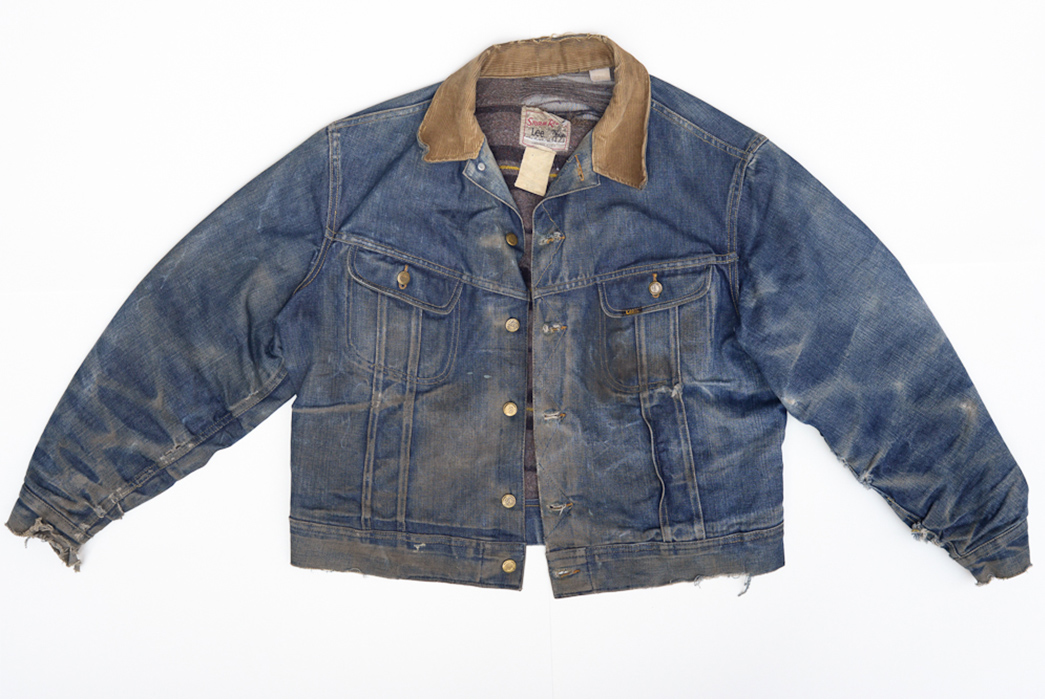 The business of denim history is a tricky one. It’s probably safe to assume there is some gorgeous, well-written, and beautifully sourced denim bible squirreled away somewhere in Japan that has the answers to all the indigo secrets. But until we find it, it’s up to us internet sleuths to fill in the blanks. Today’s history centers around one of the most iconic pieces of workwear made to date: the Lee Storm Rider denim jacket. 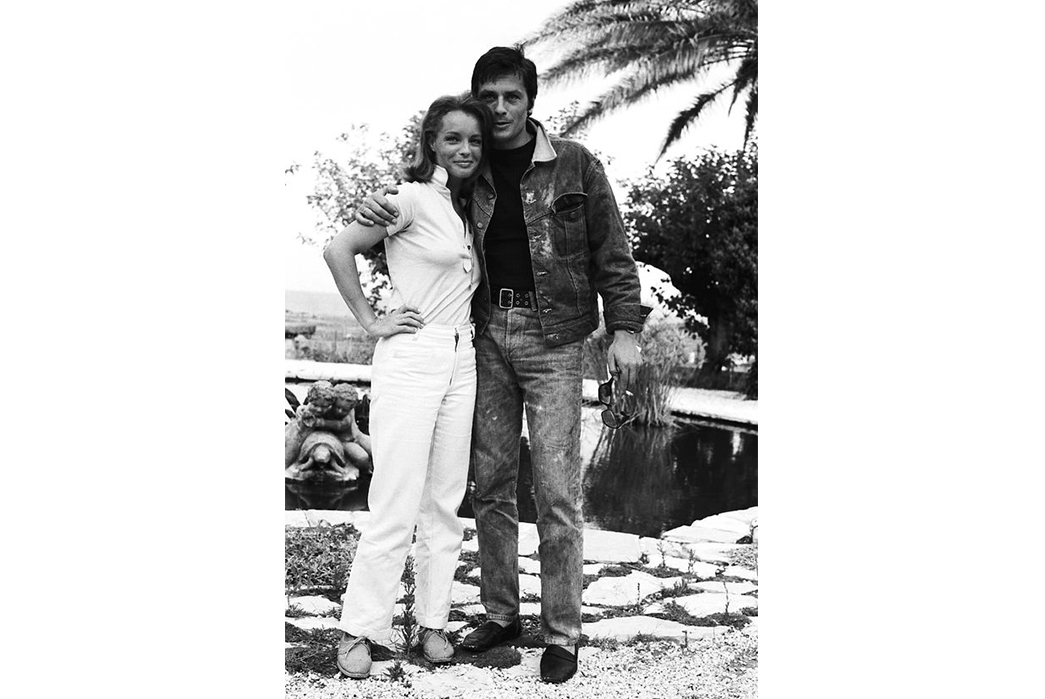 Alain Delon in a 1960s Storm Rider. Either one that’s been paint-splattered or bleached. Image via Pinterest.

Lee, unlike their competitor, Levi’s, hasn’t historically been as transparent about their brand’s history. The denim connoisseurs among us might know exactly how the iconic Levi’s jeans and jackets changed with the times (we published a guide if you don’t), but that information isn’t as readily available with Lee.

This isn’t because Lee has any vested interest in keeping us from the truth, this problem exists across many of the tentpole brands of contemporary workwear. Brands like Lee:  Wrangler, Dickies, and the like were just churning out pieces to outfit their decidedly anti-fashion constituency and it was only when outside forces took interest (this moment came for Levi’s when Vogue gave them a writeup in the 1930s) that sufficient evidence was left behind in the historical record to make for a comprehensive history.

Therefore, this guide to the Storm Rider, must, as many others, be comprised of the educated guesswork favored by our community. Some of our sources are decidedly unacademic (Superfuture comments, anyone?), but others are certainly more legitimate. To accurately date these jackets, one must study not only the minutiae of the design, but of the tags, which reflect changes in American trademark law. So strap in, get out your magnifying glass and let’s get to it. 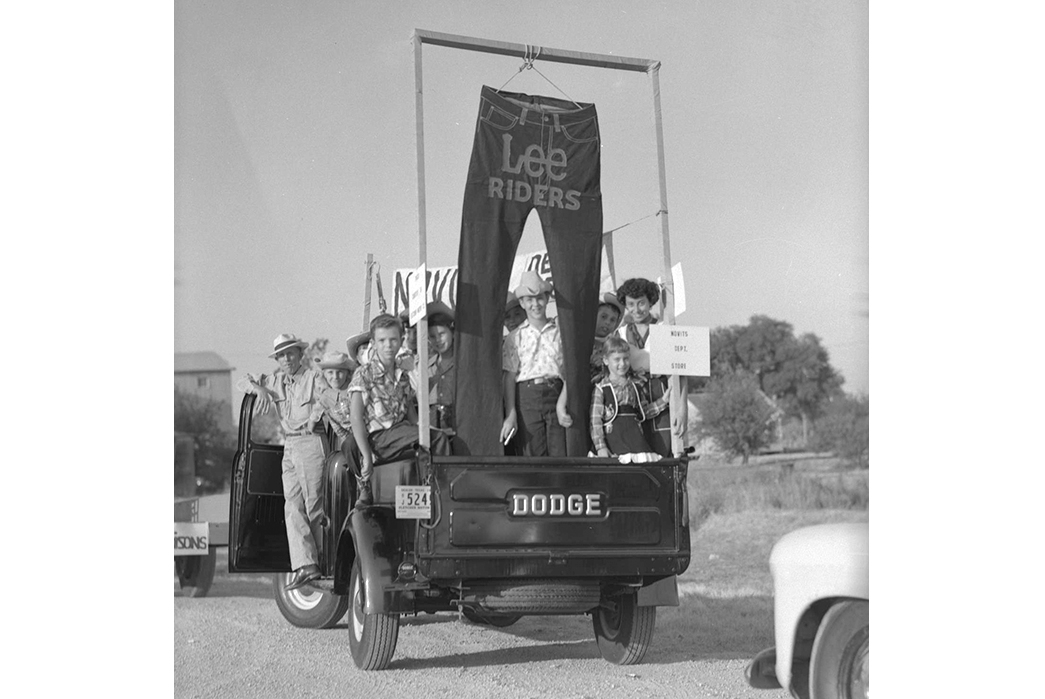 The company we know today as Lee Jeans, began life as the H.D. Lee Corporation, based out of Salinas Kansas. Mr. Henry David Lee launched this business venture back in 1889 as a grocery wholesaler that used the burgeoning new network of railroads to ship fresh produce across previously impassable distances.

Lee stumbled into workwear after he had trouble getting adequate supplies from his Eastern workwear suppliers and began producing overalls for his workers in house. Overalls became coveralls, coveralls became locomotive jackets—and finally jeans and denim jackets. 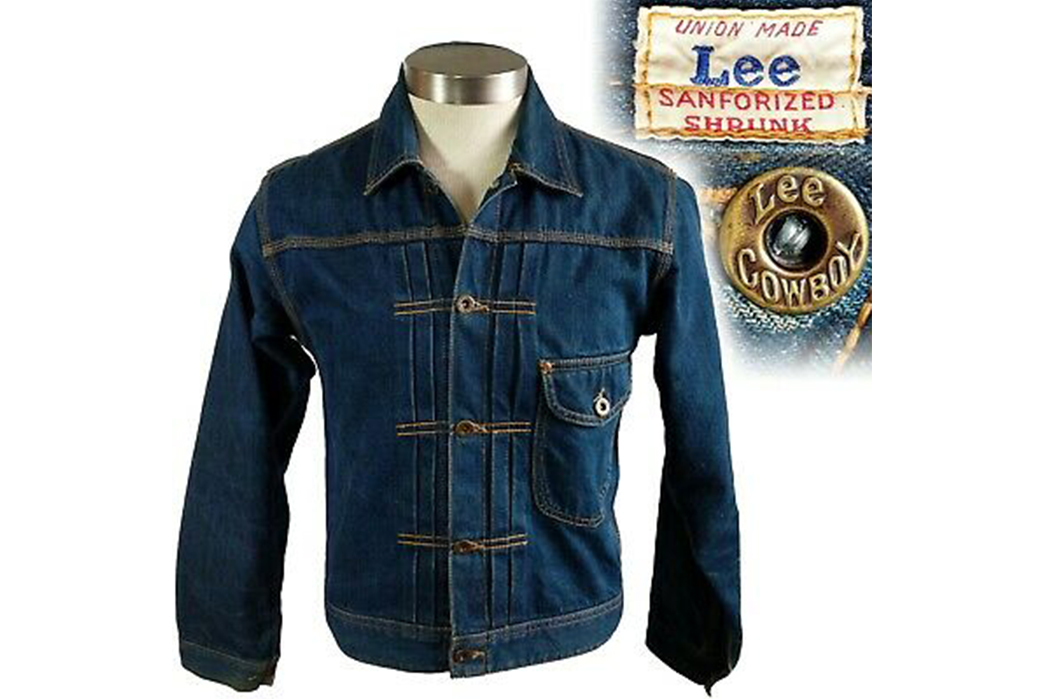 Over the course of the 1920s, Lee pushed the envelope by developing pragmatic, heavy workwear; but it wasn’t until the 1930s that the brand began to release pieces that captured the American imagination. In 1935, according to the United States Patent and Trademark Office, H.D. Lee corp. used the phrase “Lee Riders” for the first time.

The Lee Riders collection featured the now-iconic Lee cowboy jeans as well as a new jacket:  the 101J. The “Cowboy” jacket, as it came to be known, was much closer in style to a Levi’s Type I, but unlike the Type I, was soon offered in a slimmed down cut, made popular by a rodeo star named Turk Greenough. The jacket could also be lined, and this particular model was designated 101LJ. 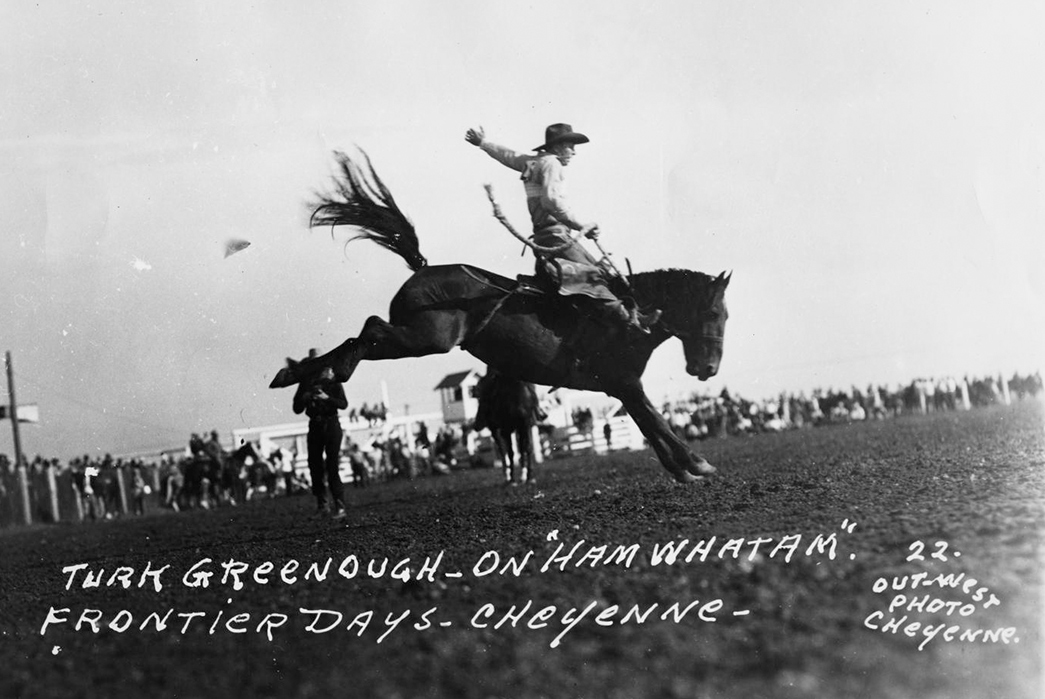 Turk on a bucking bronc. Image via The Portal to Texas History.

By the close of the 1930s, Lee was well-immersed in the world of rough n’ tough cowboy clothing, but their best-known pieces were yet to come. It wasn’t until 1948 that the New Lee Rider Jacket came out, one of the best-fitting and most iconic denim jackets to ever be produced. Released 19 years before the Levi’s Type III, the New Lee Rider was remarkably ahead of its time. 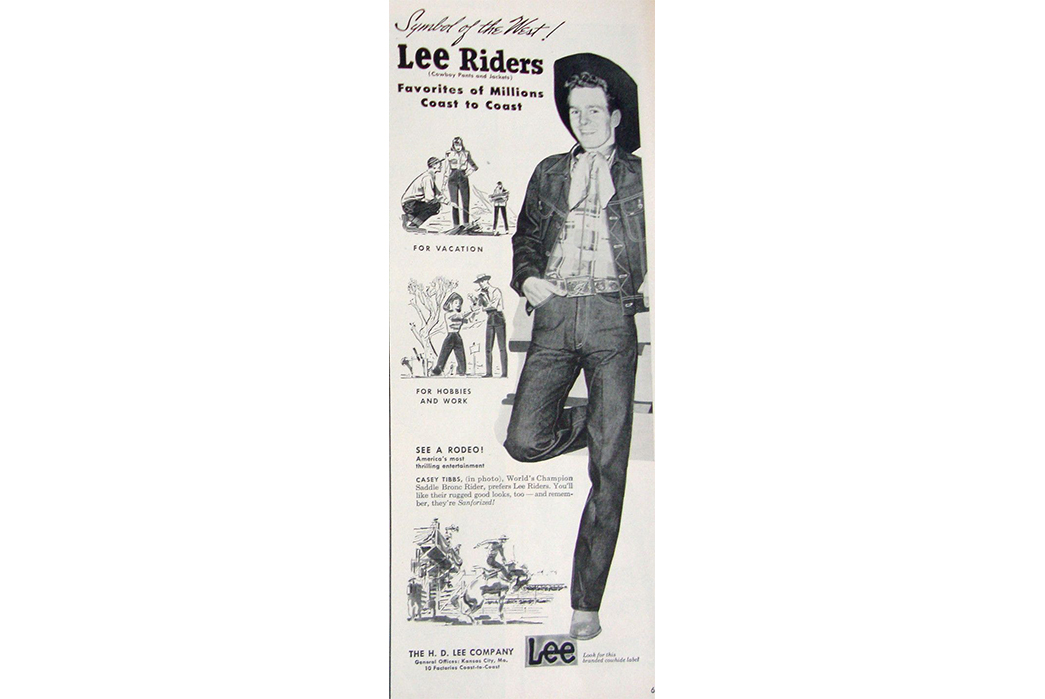 You would know the Lee Rider jacket immediately by its characteristic zigzag stitch on the front and its jauntily slanted yoke. Like its boxier predecessor, the New Lee Rider used the designation 101J, and in 1949 released a lined alternative to this new jacket. This new 101L featured a corduroy collar and a heavy saddle blanket lining. 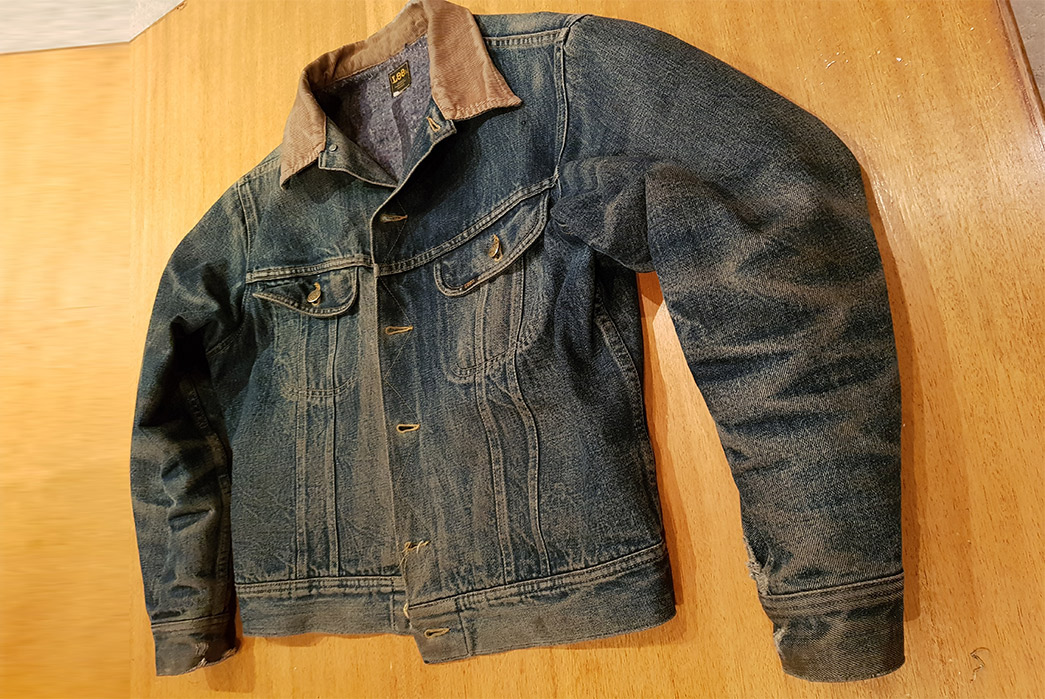 A reproduction 1940s pre-Storm Rider jacket (appears to have faux-wool liner, which isn’t accurate to the period). Image via Heddels.

The official history of Lee Jeans cites the earliest available models of the new 101LJ as being made in 1949. For all intents and purposes it was the Storm Rider. It mostly had all the same details: the corduroy collar to prevent the wearer’s neck from chafing and the saddle blanket interior to keep them warm. There was however; one major exception. The name and image and iconic label hadn’t yet been trademarked.

The short window between the creation of the new 101LJ and the first use of the Storm Rider name commercially (November 11, 1953) mark the rarest of the rare jackets. Though not technically true Storm Riders, you can identify them by the lack of Storm Rider branding and the small black label beneath the collar. There are no images of true vintage pieces with this label, but they would closely resemble the above repro. 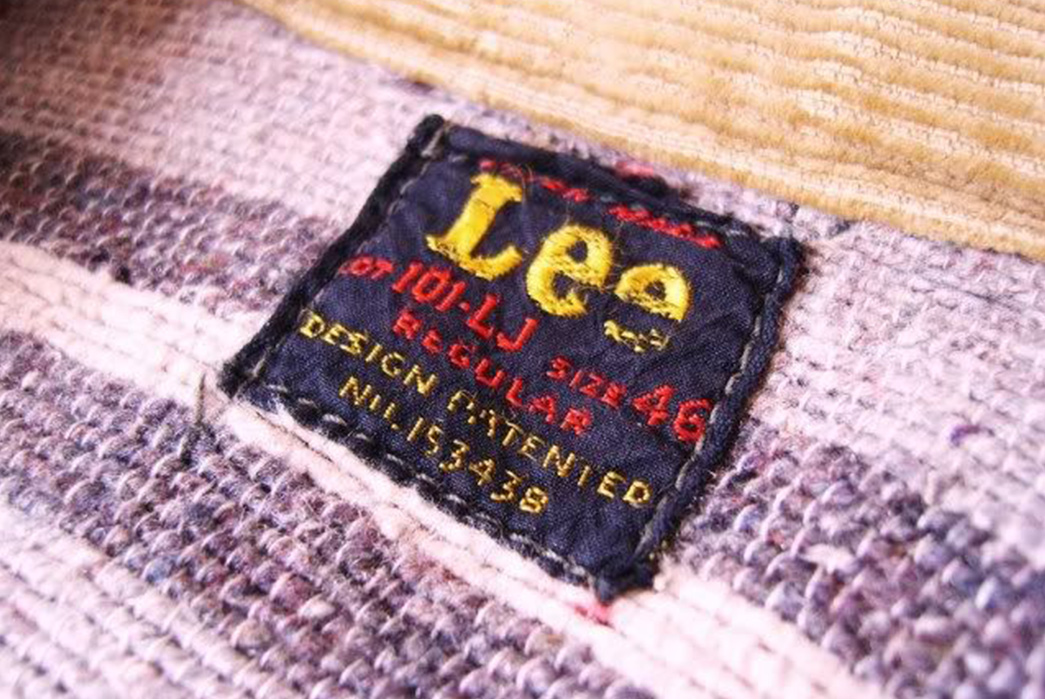 If the smaller tag resembles either of the above examples, you may very well have an extremely rare piece on your hands. A jacket from this era will easily secure more than $500, but buyer beware—I have yet to actually identify any genuine examples from this earliest period online. 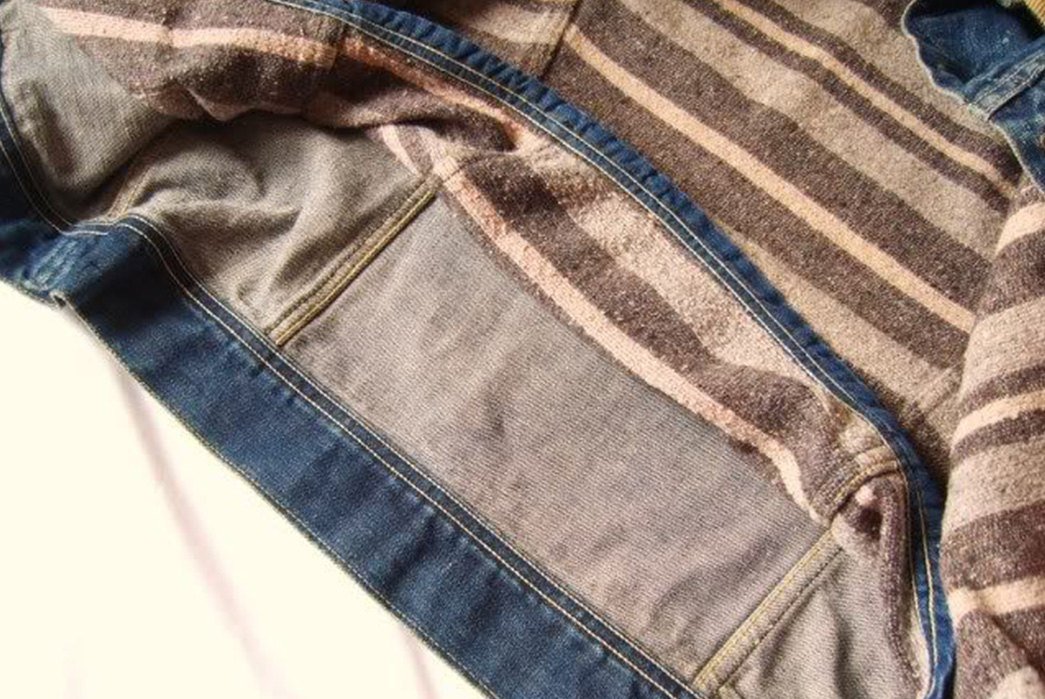 If your jacket says “Storm Rider” anywhere on it, you can be sure that it’s definitely from after 1953. Some histories assert that 1956 was the date that Lee began releasing Storm Riders, but it’s clear from the Patent & Trademark Office’s records that Lee Jeans first used the Storm Rider font and imagery in 1953, although they didn’t file their trademark until a few months later in February of 1954.

Another historical fallacy is that pre-1960s Lee Storm Riders won’t have a “Registered United States Patent Office” or “TM” symbol on the small Lee label on the right breast pocket. This is simply untrue. All New Lee Riders will feature the TM or R symbol on their pocket label because prior to the Lantham Act of 1946, it was impossible to trademark “distinctive pictures, words, or symbols” and all trademarks granted as part of this legal change had to begin typing the registered trademark “R” on the accompanying labels.

These Lee labels, with their distinctive font, reminiscent of a brand on a horse, would have fallen under this new guideline. These early “R” symbols have sometimes faded away, or are under a line of stitching, making them hard to see, but they are there. If you find a jacket without the “R” or some form of trademark symbol, it’s probably a lazy repro. 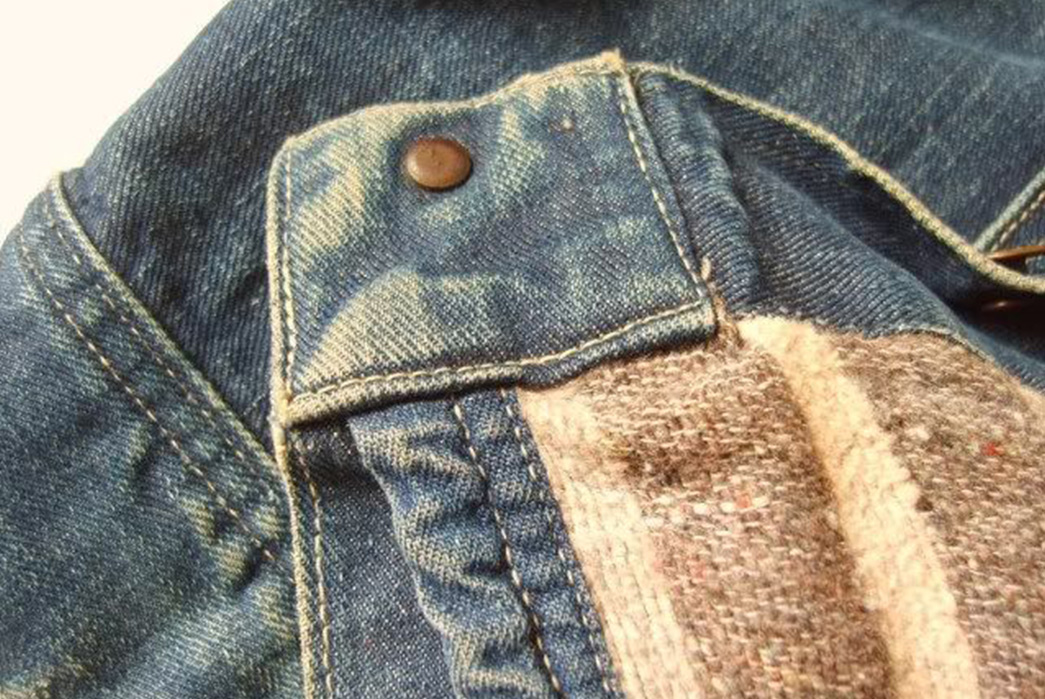 The safest and surest way to know your jacket is from before 1960 is to check the lining. There is, of course, a blanket lining, which is finished with a strip of denim, but that lining isn’t tucked away and sewn into the bottom of the denim outer shell. If these layers are separate, you’re looking at a genuine 1950s Storm Rider, you lucky dog. 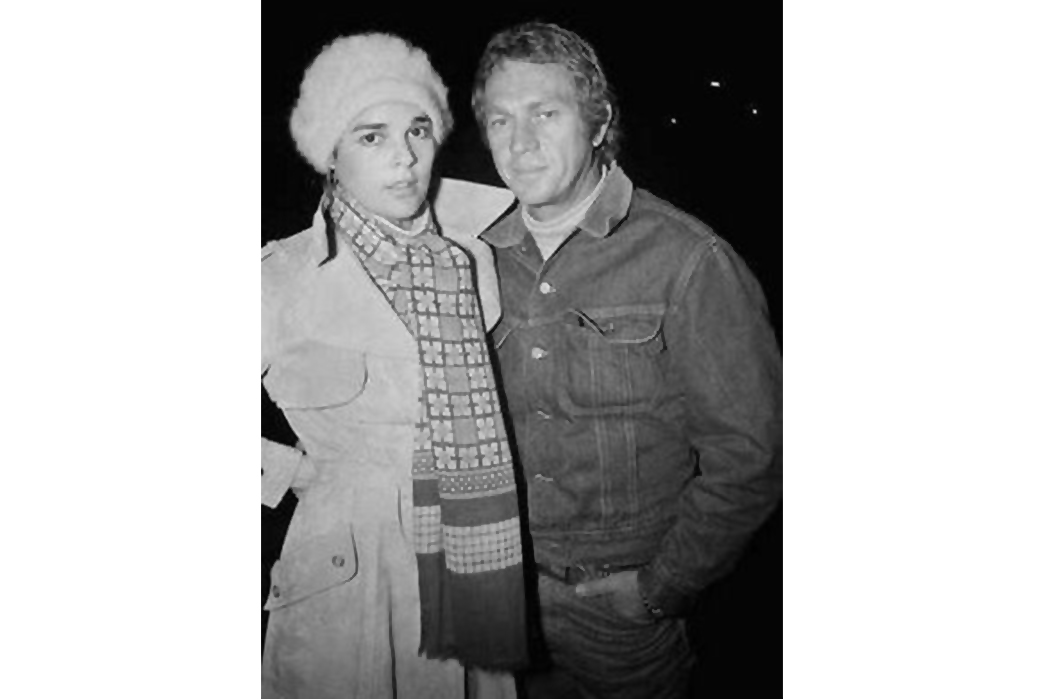 Steve McQueen in a Storm Rider and Ali McGraw. Image via Pinterest.

Paul Newman in the Lee Storm Rider. Image via Pinterest

Many of the most famous images of the Lee Storm Rider come to us from this era. They were seen on the likes of Steve McQueen, Alain Delon, and probably most famously on Paul Newman in the 1963 film, Hud. It was in this period that the jacket seems to have crossed the divide from pure workwear and cowboy clothing to a wardrobe staple. 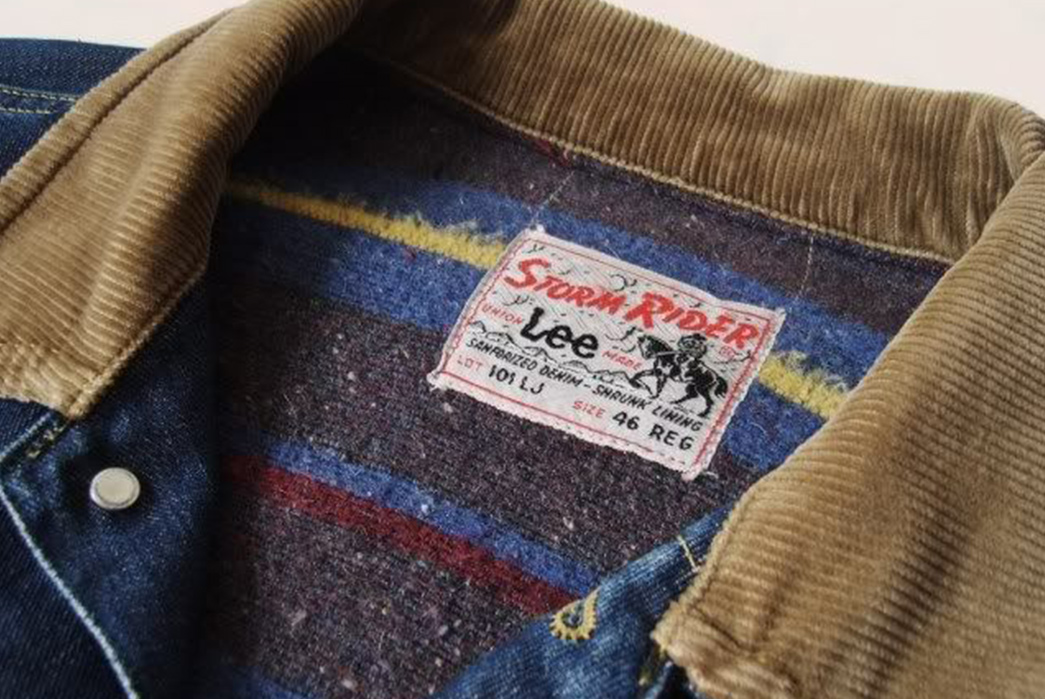 The Storm Rider tags inside the jackets of the 1960s, are, for all intents and purposes the same as they had been since 1953. The iconic image of the cowboy weathering a storm is the same and the images and text on the label are all embroidered. The jackets from this period don’t have any excess size or care tags hanging from the label and, most notably, the liner has been tucked away and sewn into the waistband. 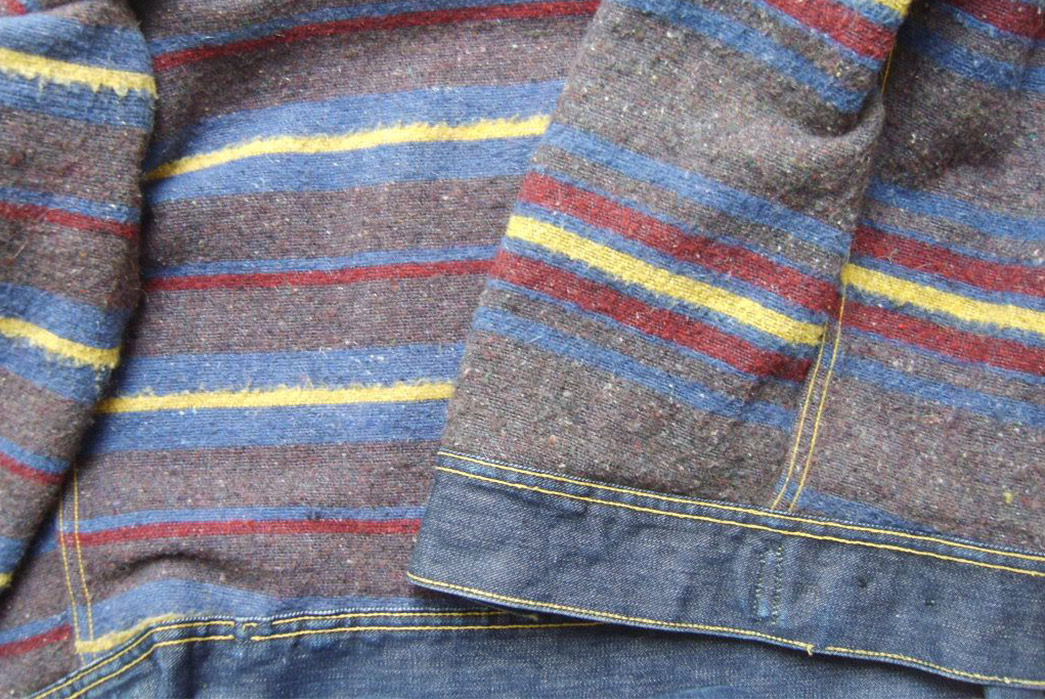 An added clue for dating 1960s jackets is the color scheme of the blanket lining. If the liner has red stripes, you’re looking at a far rarer jacket. Standard Storm Riders use a gray/blue/yellow color scheme and if you’re noticing red stripes, then your jacket was produced between 1960-1965. 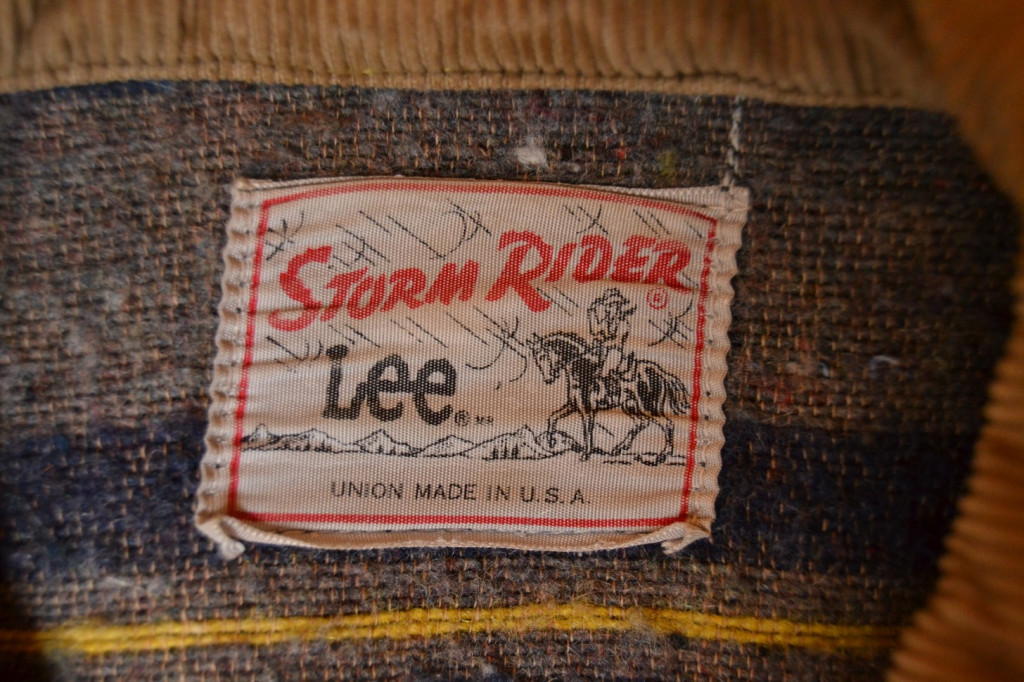 If the 1960s was the sweet spot for the Lee Storm Rider, the decades to come would reflect a slow decline in manufacturing that we see just as clearly in the other major workwear brands of the era. These changes may seem minor, especially because the Lee Storm Riders were still made in the U.S., but corners are being cut.

The first major change is the label. No longer is the iconic Storm Rider embroidered. After the 1960s, the label is a printed piece of fabric without sizing or the designation:  101LJ. Along with these more cost-effective changes, you’ll notice that Lee jackets made after 1971 specify their country of origin:  Made in U.S.A. This is partially because of the Fabric Care Label Rule of 1971, which made this commonplace, as well as mandated that all clothing sold in the U.S. have permanently attached care tags. If the tags specify that the jacket is “Union Made in U.S.A.”, the jacket is from roughly 1971-1975, just “Made in U.S.A.” will be after 1975. 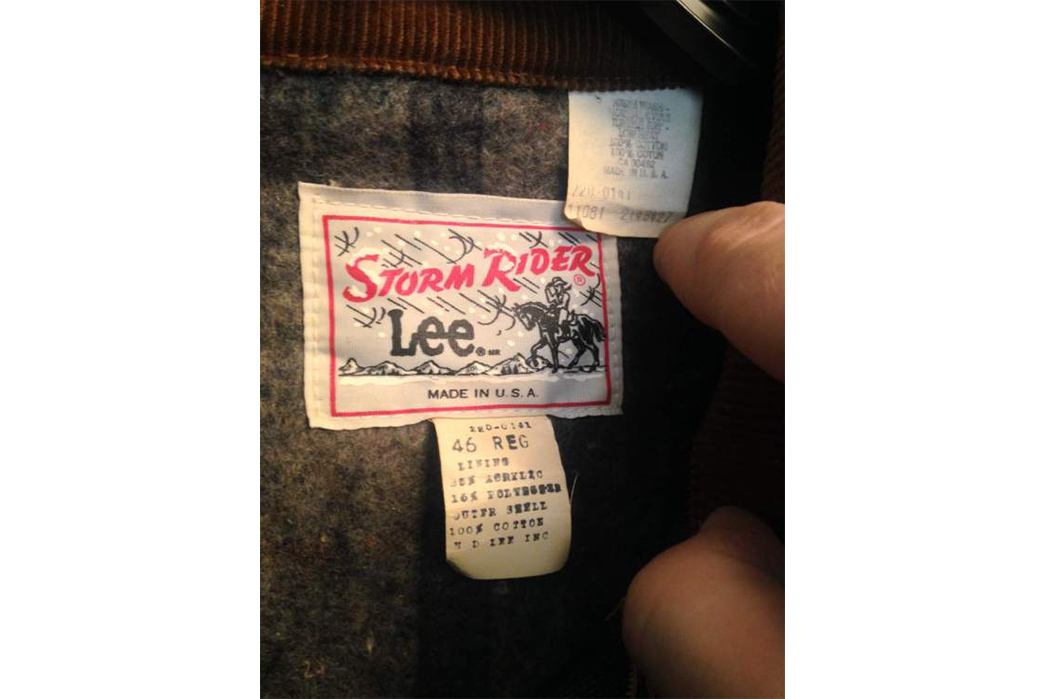 This Fabric Care Label comes in handy for a number of reasons, but it also cues us into the fact that at some point, the famous wool blanket interior has been replaced with an acrylic/polyester lining. The date of this change is unclear, but it likely happened after 1975. The clearest way to tell if you jacket has a real wool lining or not is the direction of the stripes. If the stripes are horizontal, your jacket’s liner is wool. And if they’re vertical, it’s probably the newer synthetic blend liner. 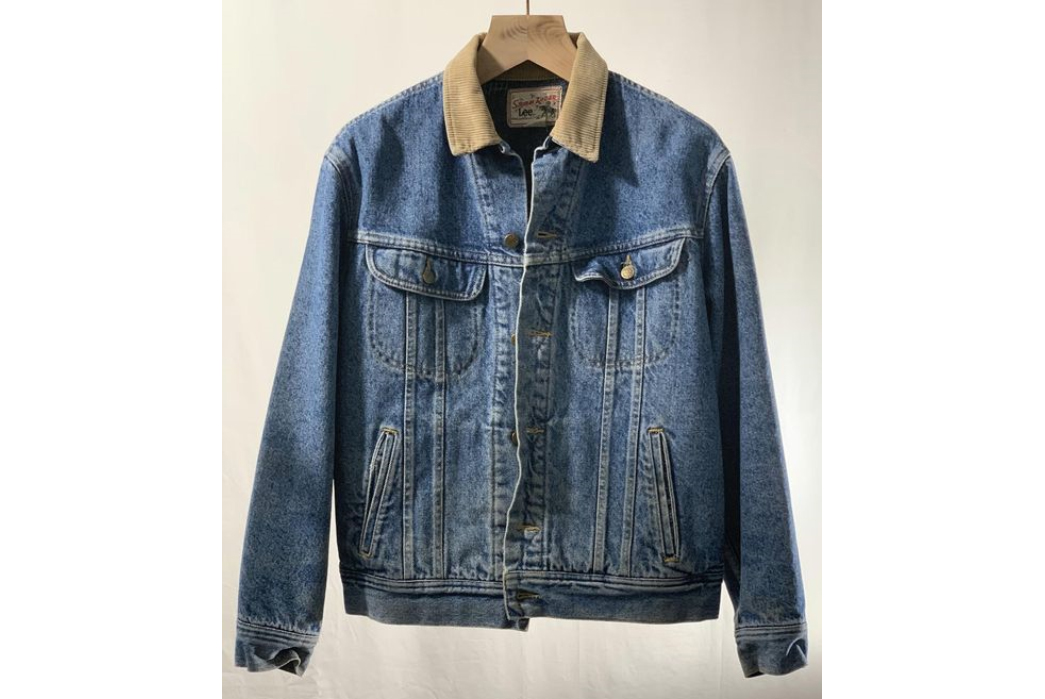 The very final nail in the coffin is does my jacket have pockets? If your Lee Storm Rider has hand warmer pockets, then the jacket has been made after 1986 and unfortunately, isn’t especially valuable. The majority of vintage Storm Riders will be from the 1970s and onwards, so it’s important to keep your eyes peeled for these crucial details. 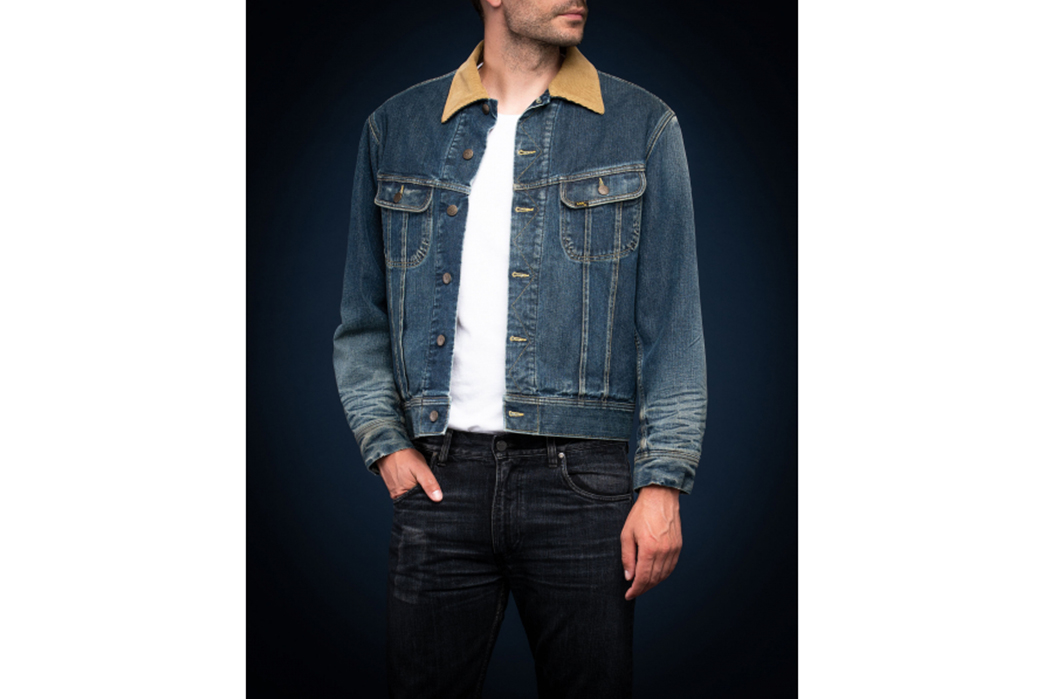 Lee, the company, is not what it once was. Though the brand still has its European and Japan-exclusive premium lines, the majority of what Lee produces these days is typical fast fashion, a far cry (in both styling and quality) from its glory days.

The post-80s Storm Riders don’t feel like they deserve much mention as they (in the scheme of things) are so much newer. It was around this time that Lee began exporting labor out of the U.S. and also when it was culturally rarer to see non-washed or distressed denim pieces on the market.

If you pick up a Lee jacket with the faux-wool liner but with nylon-lined sleeves, just set the thing back down. It’ll make for a good beater jacket, but it’s likely 1990s-early 2000s and of little to no value on the vintage market.

When the Internet is awash with really amazing jackets, many of which are incorrectly dated—sometimes in the buyer’s favor—the Storm Rider is ripe for the picking. No one has really set out to accurately date the Storm Rider and now that you and I are so well informed—maybe we should get out there and start buying, at least before everyone else reads this…

Check out the current Storm Rider listings on eBay. 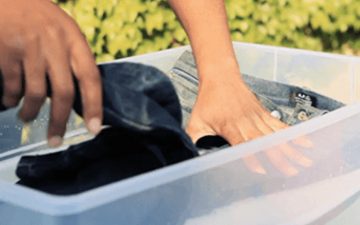 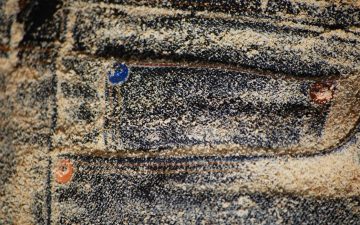 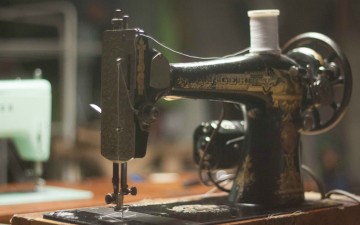 How to Buy Your First Sewing Machine 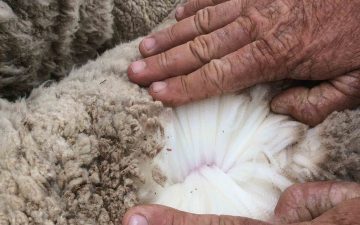 Washing Wool – How to Clean and Maintain Wool Goods