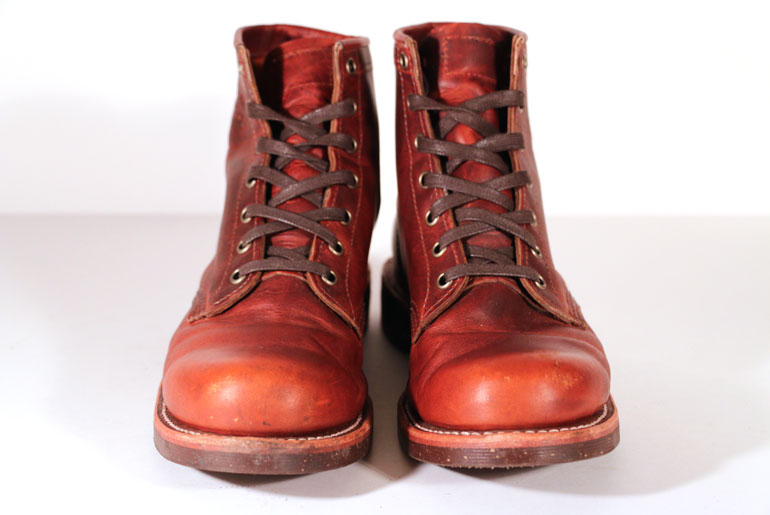 When you reach the upper echelons of any market, the differences between each offering become markedly more subjective. What makes a pair of Samurai Jeans better or worse than a pair of Onis is almost all up to personal preference. At the lower tiers, however, manufacturers are much more likely to cut corners and deliver an objectively inferior product to their competitors.

Such is the case with Goodyear Welted boots. A Goodyear Welt is a method of attaching the upper of a shoe to the sole. It’s an old-world, labor intensive process, but ultimately makes for a more durable and waterproof piece of footwear that can be resoled several times and drastically extend the life of a shoe.

So, how did we narrow the field? First off, we only considered boots with a Goodyear Welt for this test, as they are easy to recraft, more weather-resistent, and there’s a good variety of workboots out there for purchase. Second, we also wanted something that was relatively affordable (sub $350). Welted boots are expensive, but their longevity often allays at least some of the cost. Third, we wanted something was was relatively accessible–available year-round, pretty much always in stock, and available to try on and return if not in person but easily through the mail.

Given those qualifications, the four boots we tested were the Red Wing Iron Ranger, the Thorogood 6″ Soft Toe, the Chippewa Service Boot, and the L.L.Bean Katahdin Iron Works Engineer Boot.

We tested these boots on their fit, construction, materials, and aesthetics. Aesthetics is the design and overall look of the boot. And let’s be honest that these are boots you’re buying for appearances–if you wanted a boot for real work, you’d get something ugly with a safety toe. Fit entails how comfortable and supportive the boot is to wear and how intensive the break in period was (I wore each pair for a week straight). Construction encompasses not only the techniques used to put the boot together but also the quality control behind them. And finally, Materials covers the quality of the leather, sole, welt, thread, shank, and lining of the boot.

Yesterday, we looked over L.L.Bean’s Katahdin Engineer Boot and found it to be a sturdy boot but with some problems in the midsole and a questionable country of origin. Today, we’re turning our sights to a slightly better option, the Chippewa Service Boot. 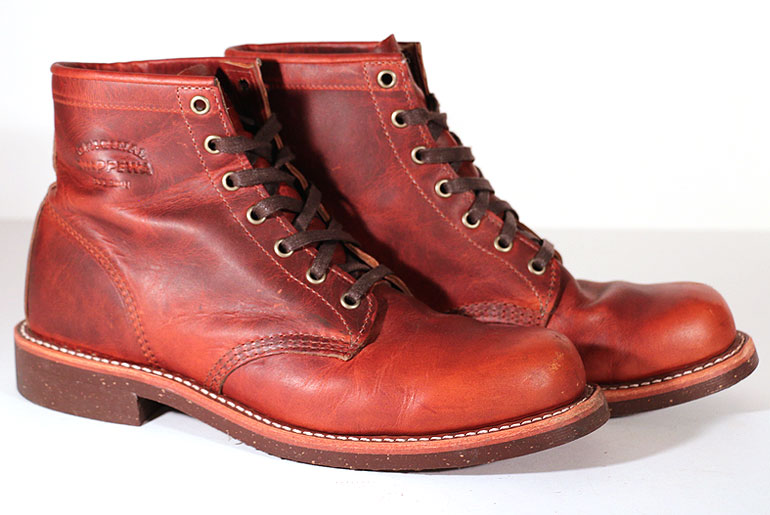 The Chippewa Service Boot is a great looking option that has a beautiful leather and design details, but as it is made by the same parent company suffers from many of the same inherent drawbacks as the L.L.Bean Engineer Boot.

The Service Boot is a looker. It possesses the same slimmed down workboot appearance as something like the Red Wing Beckman but for about a hundred bucks less. The plain, semi-structured toe makes for a substantial but iconic silhouette that looks good without calling too much attention to itself. 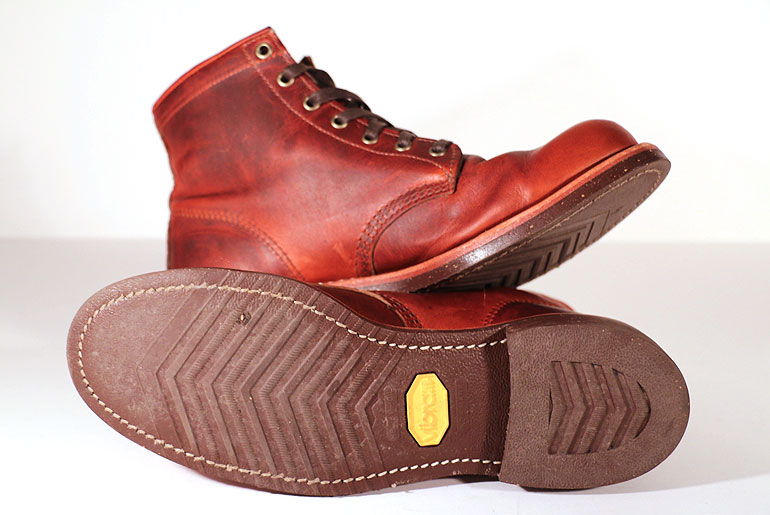 The only slight break in character would be the “Chippewa” stamp on the boot’s ankle, but that’s discrete enough to be forgiven. 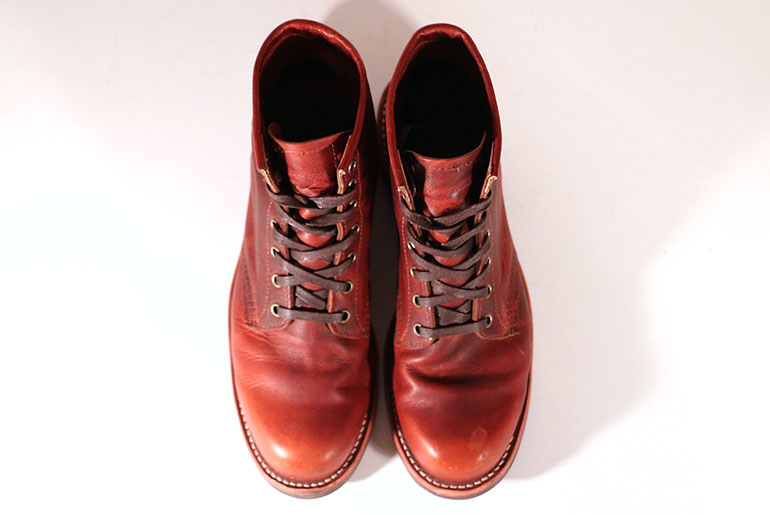 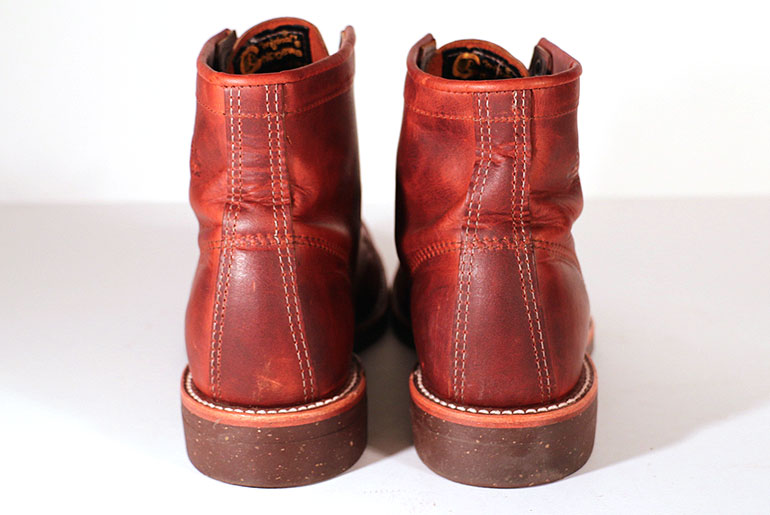 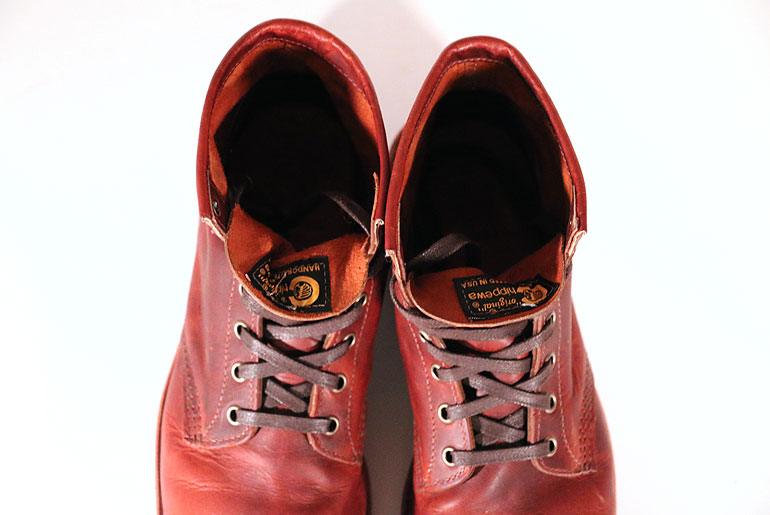 The Service Boots are also quite comfy straight out of the box, and they’re tied with the Thorogood‘s for the least amount of break in time. I was able to keep these boots on for 10 hours on first wear and had minimal aches afterwards. Fit is true to size. 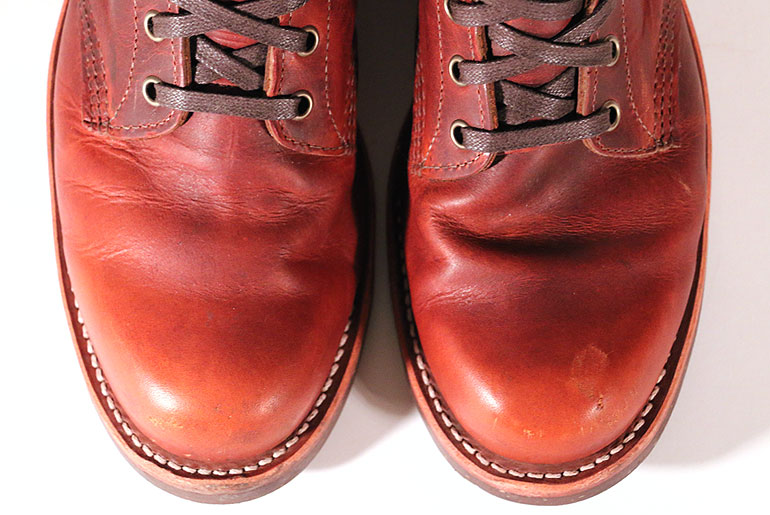 The last itself also fits well and provides a decent amount of support. No complaints on fit! 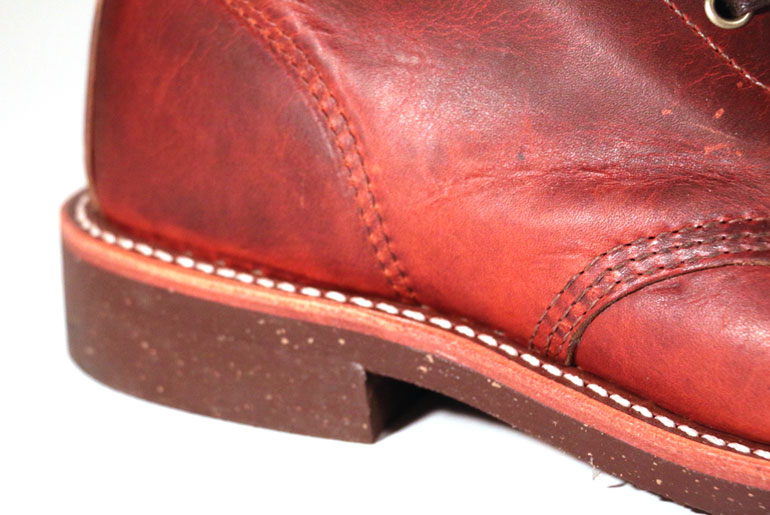 Chippewa opted for a full 360 degree Goodyear Welt on this boot, and although it sort of pains the slim profile of the boot, it doesn’t really detract from its durability. The stitching to the mid-sole doesn’t line up exactly where the stitch begins and ends, but that’s purely a cosmetic problem. All of the tonal stitching on the upper was fairly clean and even. 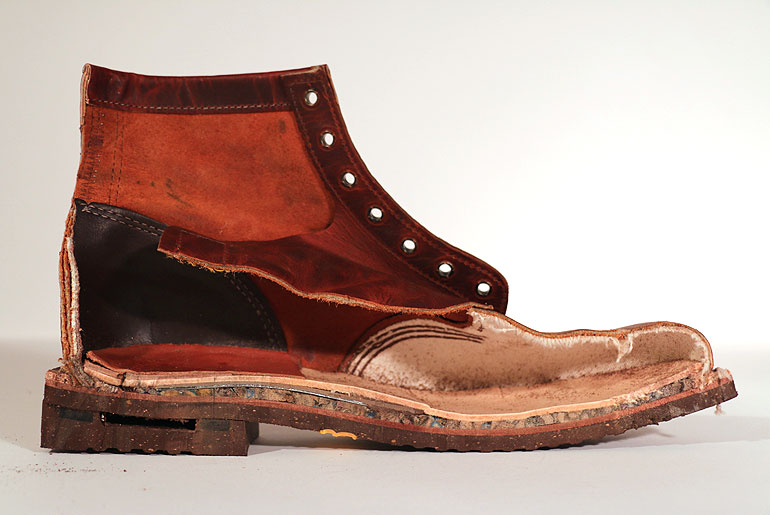 The inside of the boot revealed pretty much the same makeup as the L.L.Bean, sans the “Made in China” surprise. 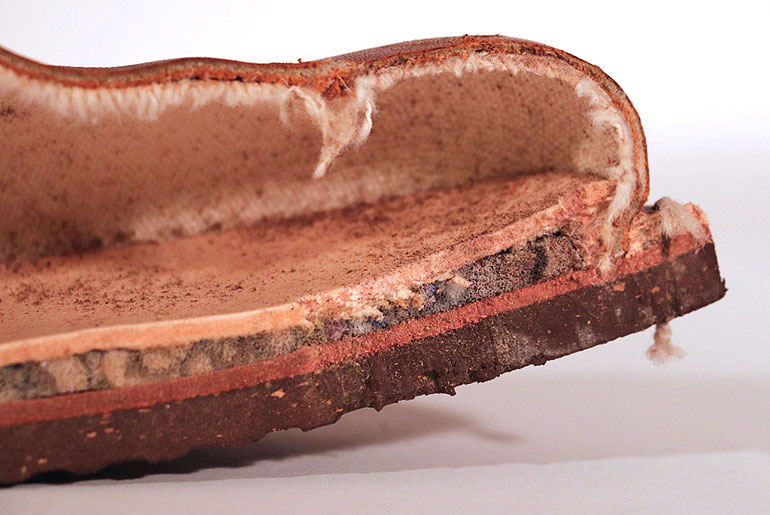 Aside from a leather heel pad, both boots use the same synthetic footbed, shank, foam core, and what appears to be a similar toe liner, and all the same critiques apply. The only real difference under the upper is the V-bar Vibram as opposed to the stamped one. 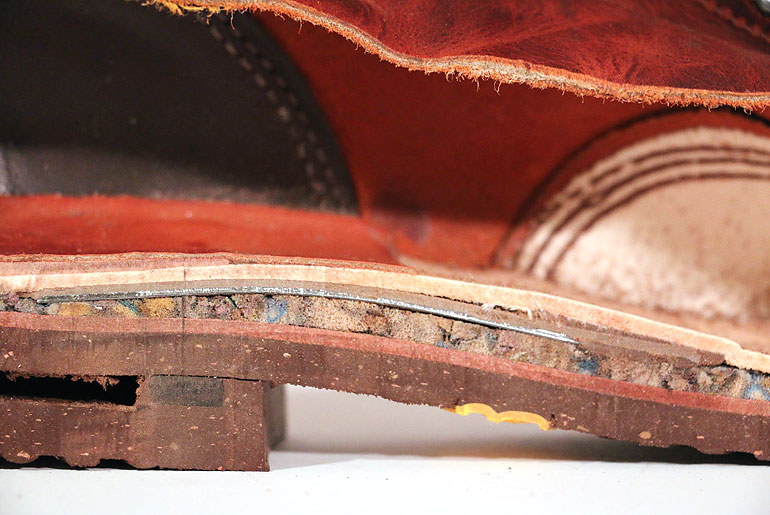 The leather on this boot, however, was quite nice. It broke in quickly, had great pull up, and appeared to age well. A big step up aesthetically from the L.L.Bean, but it was also a good bit thinner and may not wear as well. 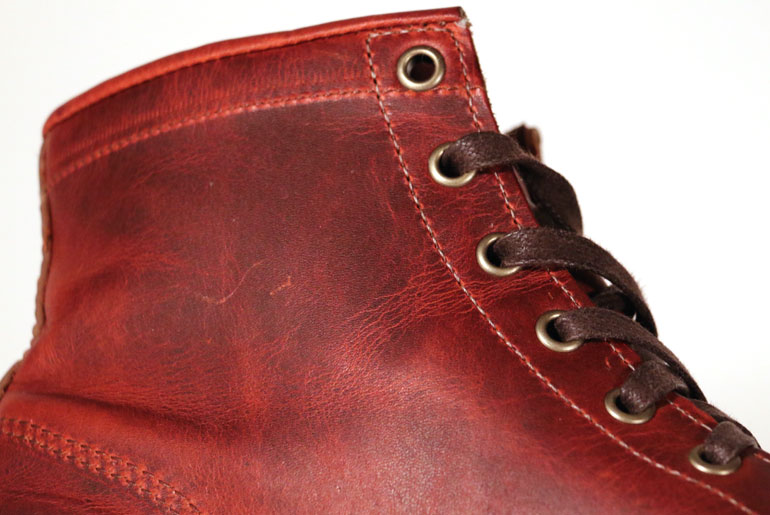 Our showdown continues with tomorrow’s competitor, the Thorogood 6″ Soft Toe. 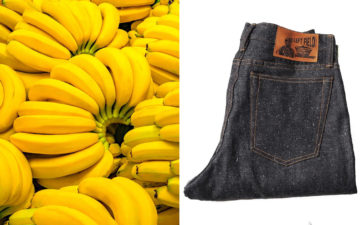 Left Field NYC and The Appeal of Banana Denim 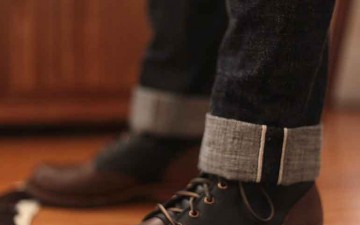 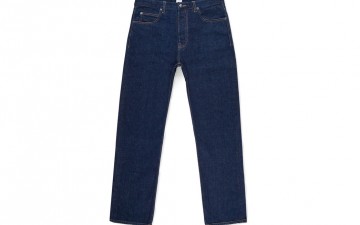 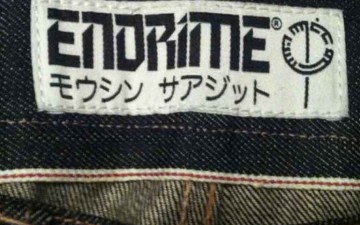