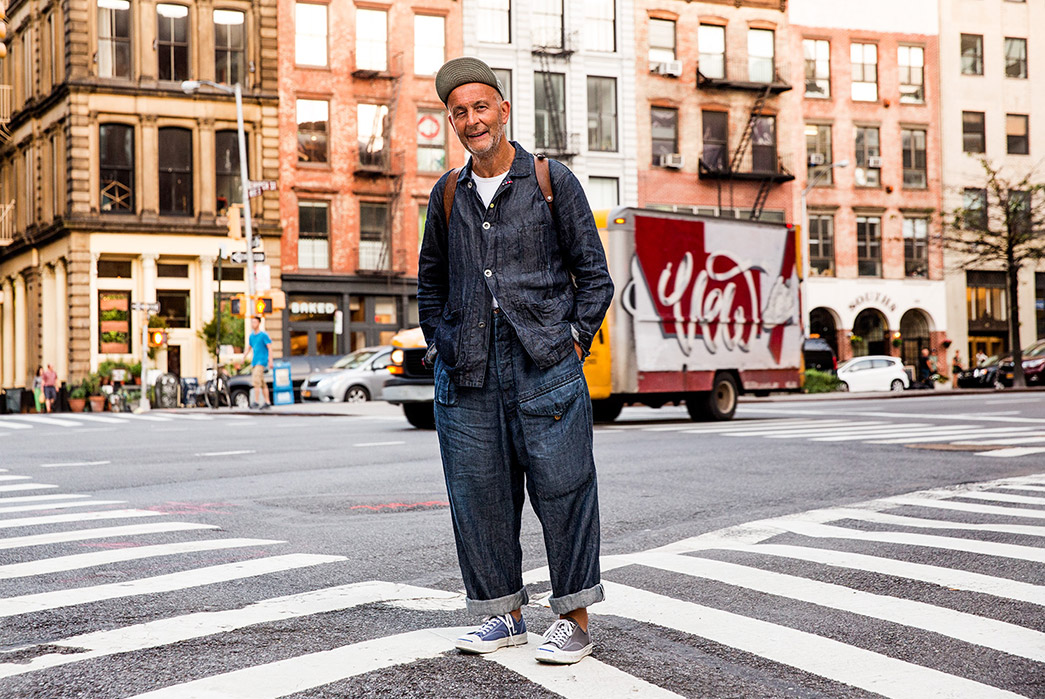 Nigel Cabourn doesn’t class himself as a fashion designer. Period. The man himself and the Cabourn brand do not associate themselves with fashion fads or seasonal trends. But while Cabourn is without a doubt ‘on trend’ and enjoying some of the most prolific success of his career, this is far from intentional in many respects. Cabourn is simply doing what he has always done. It just so happens that the menswear (and womenswear) worlds have caught on to his vision and craft. A youthful, energetic and humble gentleman with modest northern roots, it seems fitting that a new generation is now reveling in the culmination of over fifty years experience in the fashion industry.

As much of a visionary as Cabourn is, contrary to the fashion world at large, he is often not looking ahead for the next hot trend. He’s looking back, way back; to the turn of the Twentieth Century and the polar ice caps of the Antarctic; or the sharp peaks of the Himalayas and dense jungles of Vietnam. What makes Cabourn’s vision unique and rare, is not simply referencing the past, but re-telling a story with so much depth that it makes you feel like you’re wearing a garment that saw those stories unfold. 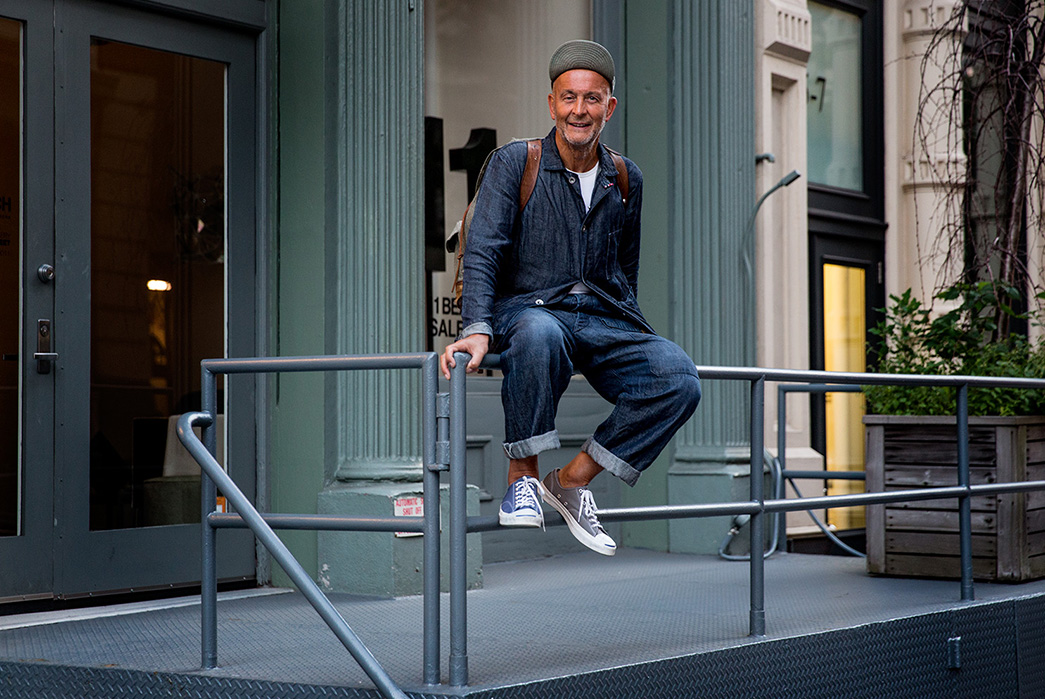 We’re going to lace up our boots and look at the history of the brand, how it developed over the years and how Cabourn ended up as one of the most well-respected British menswear designers of the Twenty-First Century. For a man who in his own words is ‘supposedly a designer’, he’s certainly come a long way and left a mark on the map much bigger than his unassuming northern beginnings.

Born in of Scunthorpe in 1949, Nigel’s father was a local Postmaster at a time when most working men went ‘down the pit’ (for those readers outside of the UK, this refers to working in a coal pit or underground mine). Through the support of his parents, Nigel managed to escape a life of hard manual labor and surprisingly (to him) got accepted into Newcastle College of Art and Industrial Design to study fashion.

Fascinated by the pop music culture of the late-1960s, Cabourn was inspired by the ‘Flower Power’ movement, the Vietnam War, British ‘Mods’ and a plethora of sports—including cricket, football, and table tennis. He’s said that he still feels strongly that he should have become a professional goalkeeper for Scunthorpe United. Studying from 1967-1971, arguably a pivotal time not only in fashion but in society more broadly, Cabourn soon realized it would be “good fun” to make clothes and to get people wearing them. 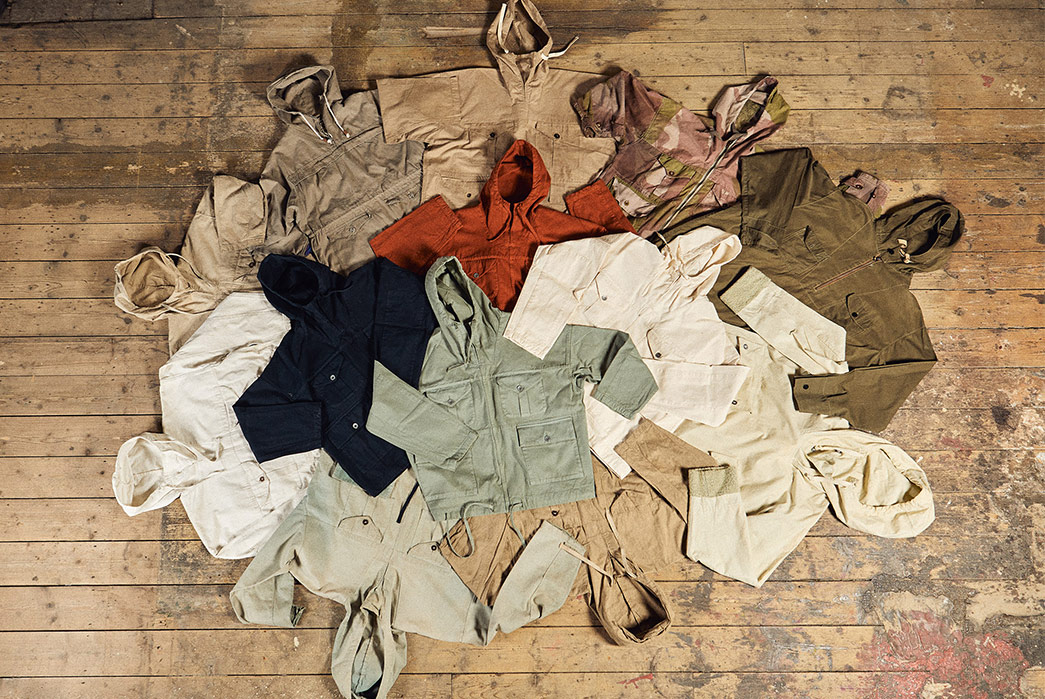 In 1970, during his third year of study, Cabourn established the ‘Cricket’ brand following a loan from the bank to kickstart his business. Even in the seventies, Cabourn made every attempt to make garments locally and build what he referred to as an organic company, sourcing materials within miles of his Newcastle home.

By 1973, the brand had four employees and was getting orders in excess of £100,000. This was helped by the fact that a young Paul Smith, who met Nigel in 1972, became his agent and helped get the Cabourn product into leading UK retail outlets including Village Gate Stores in London and Smith’s own shop in Nottingham. From 1973-1985 Cabourn continued to design and regularly showed his collections in Paris alongside contemporaries such as Margaret Howell, Vivienne Westwood, and Smith. 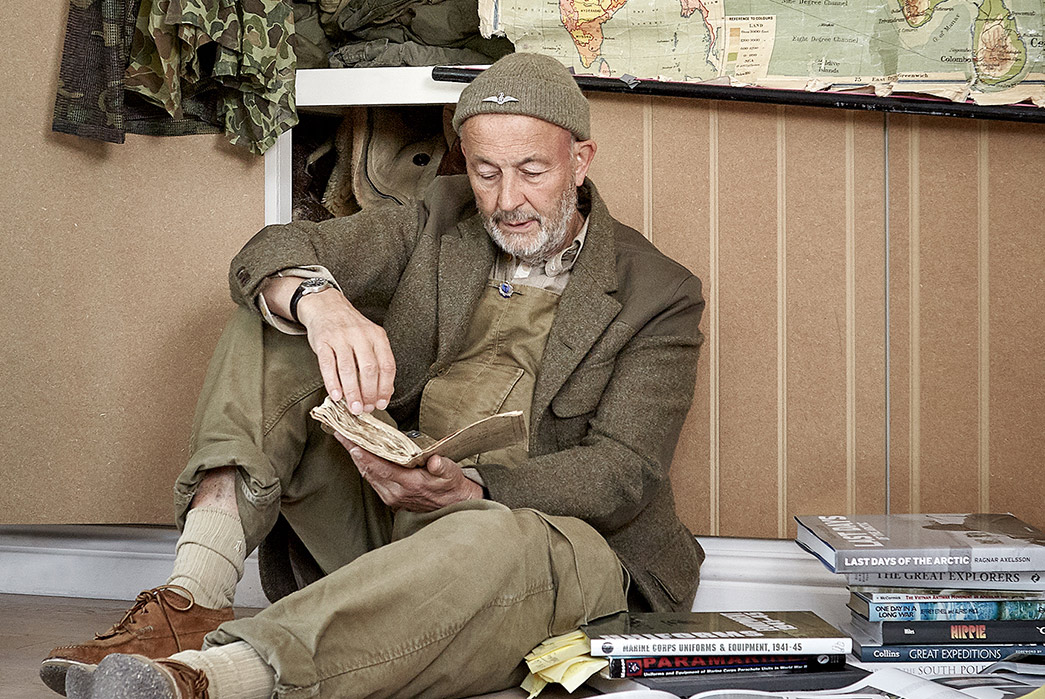 In 1980, Cabourn met Sam Sugure, who at the time was working with Howell. He loved the brand and asked Cabourn whether he would be interested in getting involved in the Japanese market. It was a conversation and decision that 38 years later, is still paying dividends. Being one of the first individual designers in Japan, closely followed by Smith and Katharine Hamnett,  Cabourn has steadily grown a cult following in the Far East which shows no signs of slowing down. Sugure is now the President of Outer Limits Co. which represents the brand in Japan (along with the likes of Oliver Spencer and Filson) and oversees six Cabourn shops. 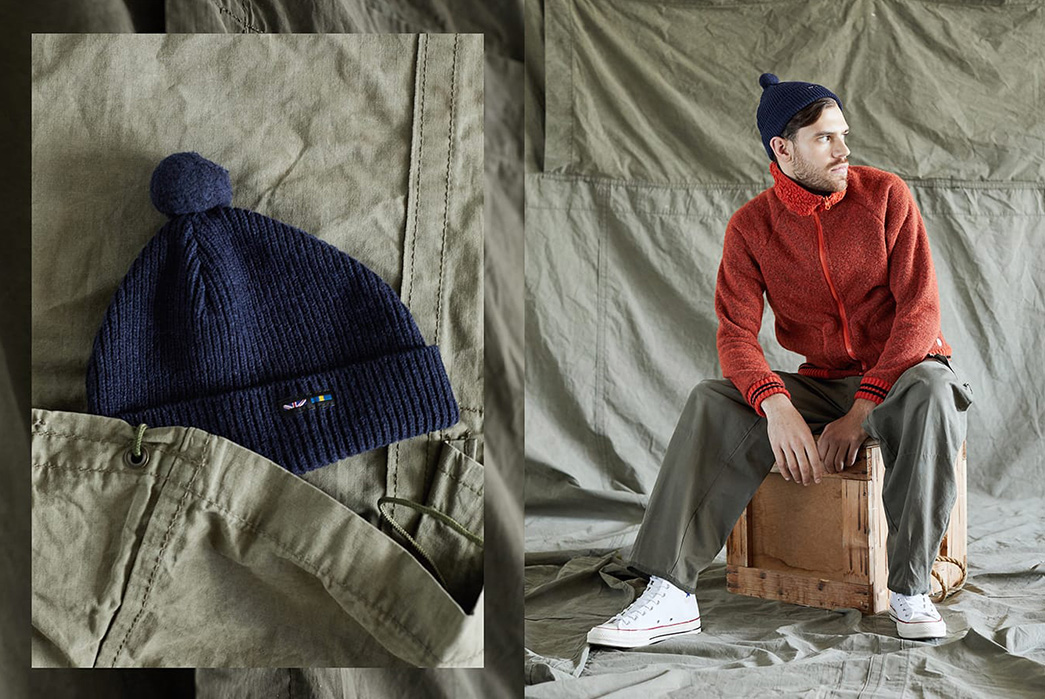 To supplement the design process and bring authenticity to his production, Cabourn has collected vintage military, sports, expedition, and workwear clothing since the late-nineteen seventies: “I didn’t know vintage existed until 1978”, claimed Cabourn, after being gifted a vintage Royal Air Force (RAF) flying jacket by Smith. Having been fascinated by the functionality and fabric of vintage garments ever since, the Cabourn archive now houses thousands of pieces from all corners of the globe. 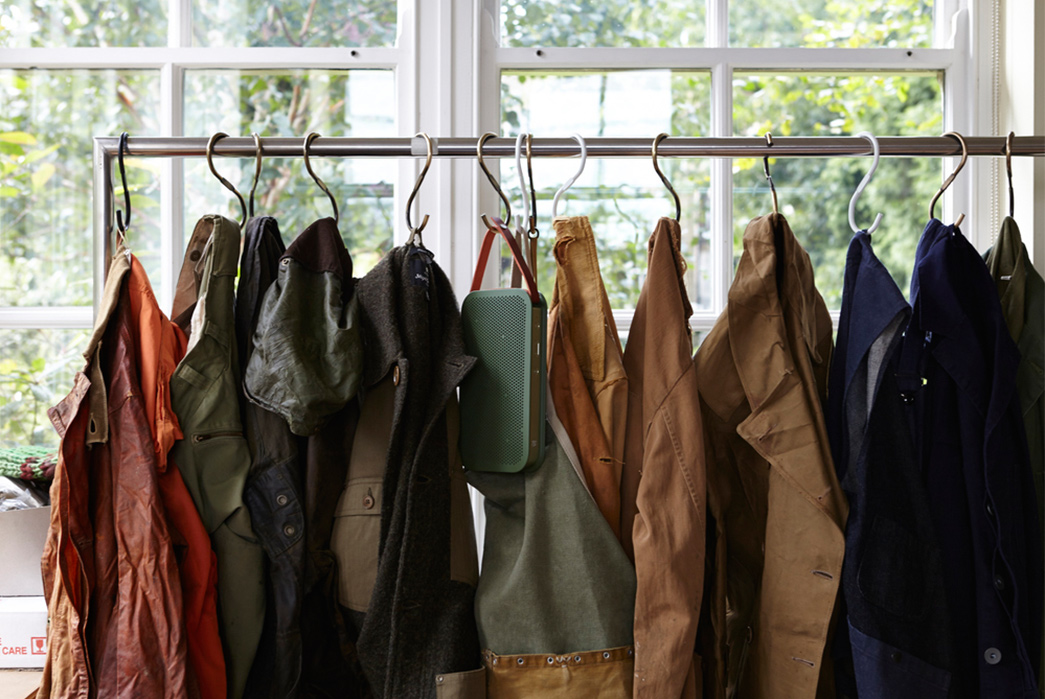 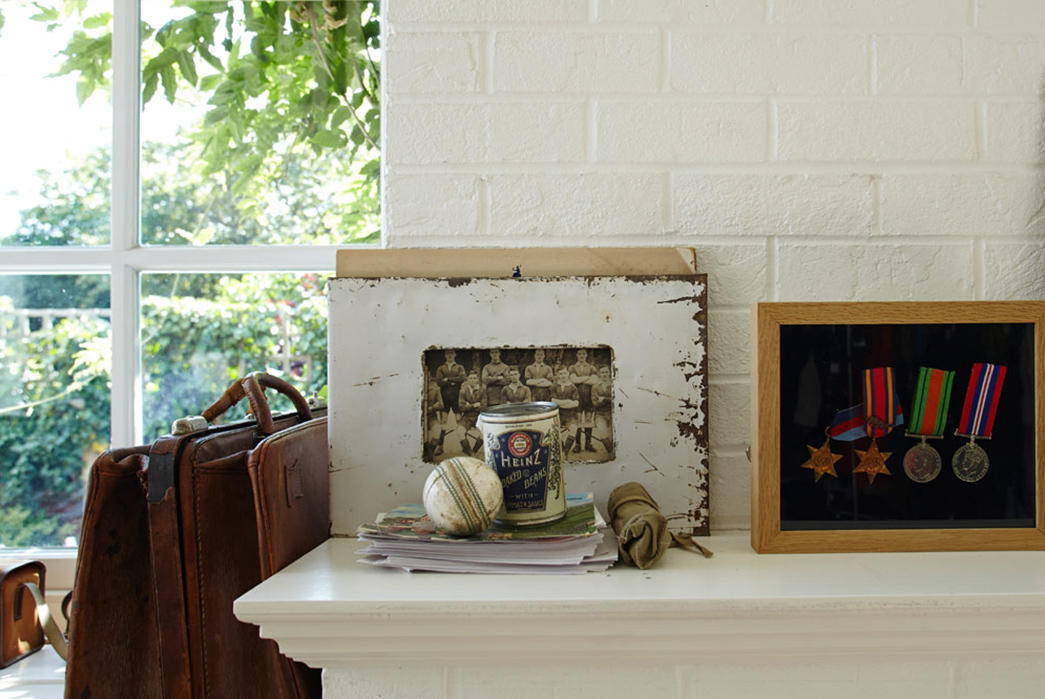 Even since those early days of designing, product has always come first for Cabourn and he has continuously hand selected manufacturers for fabrics, fixtures, and trims. In his own words, the brand has always endeavored to “create timeless styles that have the quality to last, get better with age and wear and that are still relevant in years to come”. This approach appears to have served Cabourn well and he is not shy about admitting one of the key ingredients to his success: “I always use the best of everything and I don’t compromise, this is how I get such a great product”.

However, even with the above successes, it wasn’t all smooth sailing. Cabourn found himself “pretty much on the bones of my arse in 2000, I was doing terrible.” And after collaborating with British high-street retailer Debenhams, he found himself doing consultancy work for outdoor wear brand Berghaus and wondering what his next move would be. With some encouragement from Sugure which coincided with the fiftieth anniversary of Sir Edmund Hillary’s ascent of Everest, Cabourn was inspired once more. 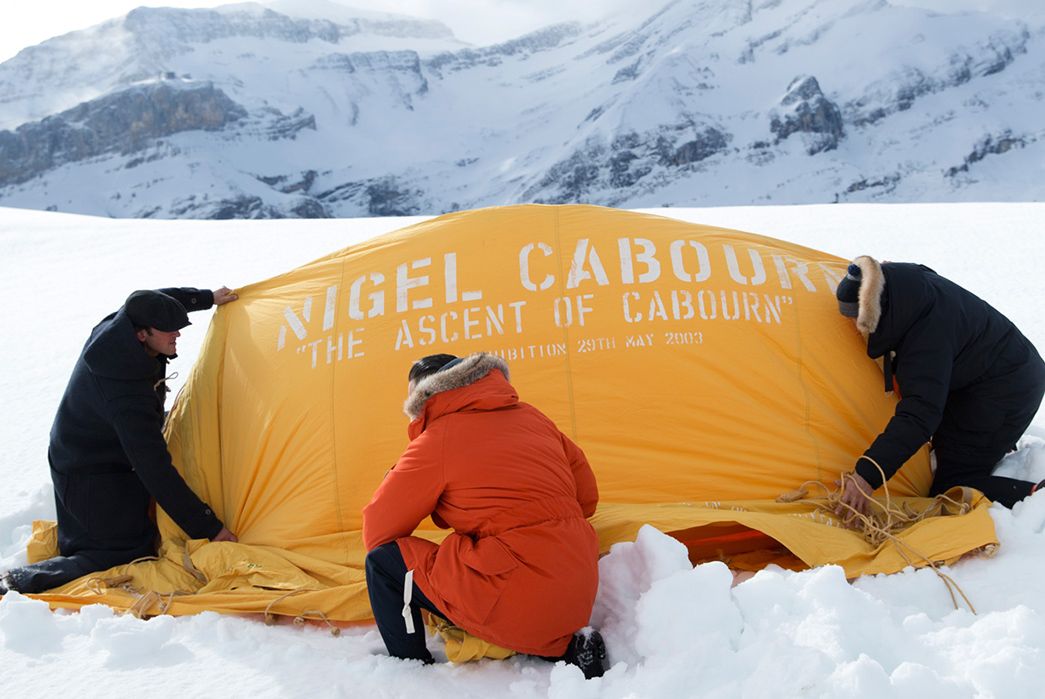 The Ascent of Cabourn

‘The Ascent of Cabourn’ Limited Edition collection followed in 2003, which helped re-launch the brand and recreated 12 pieces of clothing worn by Hilary and his team, including the Everest Parka. Cabourn went to great lengths to create the best parka he was able to, including a trip to Christchurch in New Zealand to see Hilary’s original parka from the 1953 expedition. Almost becoming an instant classic, Cabourn’s ‘Everest Parka’ is inspired by the original and manufactured to the highest quality to withstand temperatures of minus 40ºC. The parka features a three-panel snorkel hood with wire support and coyote fur trim, waist drawstring, goose down fill and Ventile outer shell. The Ascent of Cabourn collection was also supported by a hardbound lookbook which showed original photos alongside the contemporary garments. 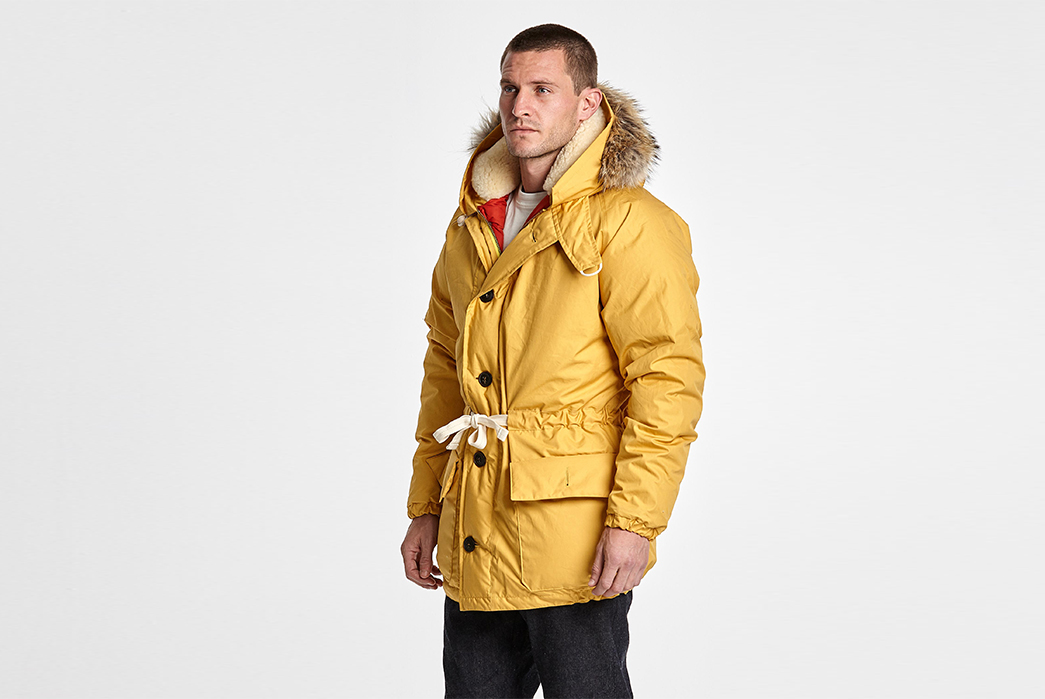 The Cabourn brand had regained its momentum and other collections followed including; Scott’s Last Expedition (2012), the first Cabourn women’s collection (2013), a second Sir Edmund Hilary inspired collection (2015) and Whatever Happened to Sean Flynn (2018). In 2008 a whole collection was also dedicated to the pictures from Cabourn’s Father’s WWII Army Service Book after it was found by Nigel in 1981. This featured the iconic ‘Bombay Bloomer’ shorts which John Cabourn wore to do the gardening in at their Scunthorpe home. Another milestone for Cabourn was opening his first UK store in 2014: The Army Gym at 28 Henrietta Street, Covent Garden. 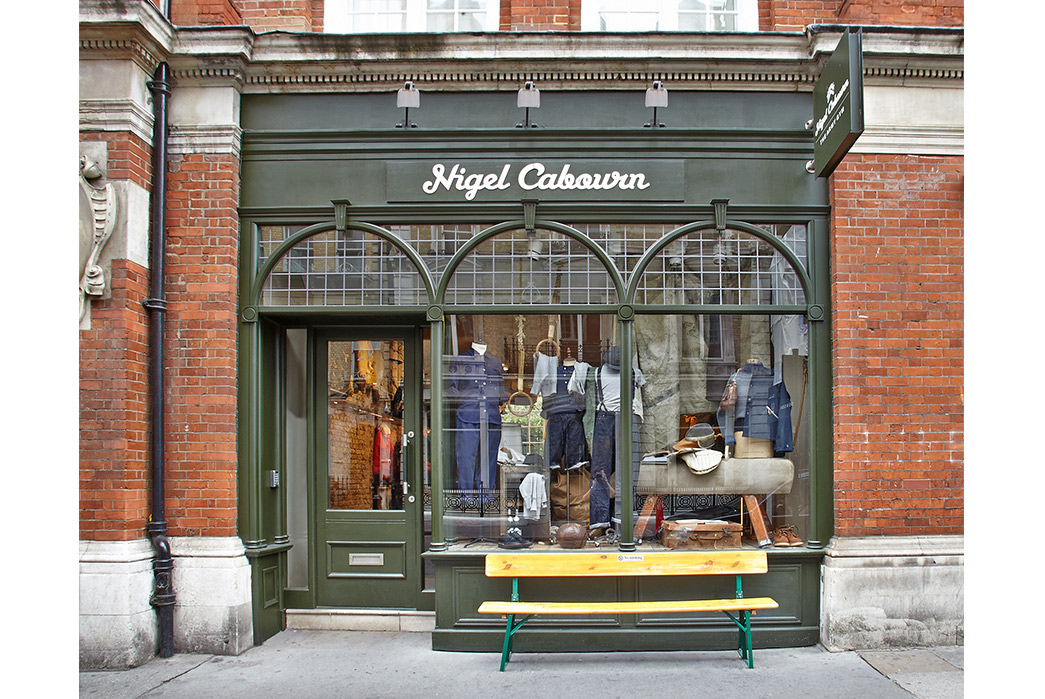 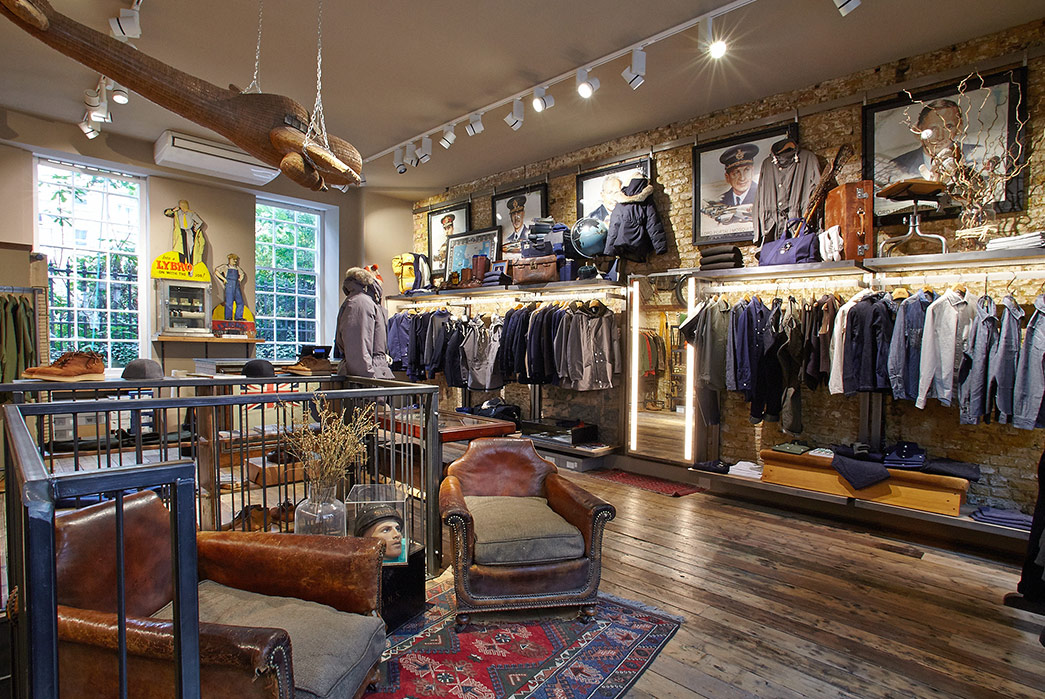 Today, the Cabourn brand is made up of four distinct lines; Nigel Cabourn Authentic, which focuses on classic heritage garments made in England; Nigel Cabourn Mainline, a line inspired by Japanese fashions, fabrics and production techniques; Lybro; a re-defined version of the British workwear brand originally established in 1927; and the Nigel Cabourn Army Gym, a sportswear-inspired line which channels Cabourn’s passion for exercise and keeping fit. More recently, Cabourn has also collaborated with Swedish outerwear giants Peak Performance and offered a standalone collection of garments inspired by the brand’s heritage and Swedish military outerwear. 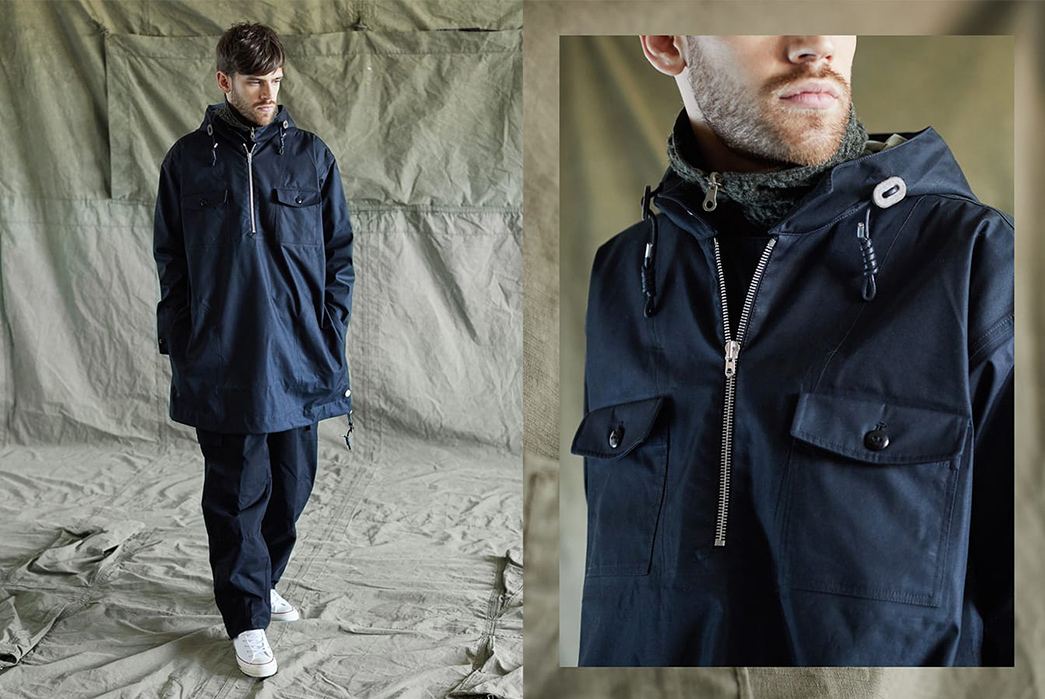 Collaborations have also been key for the Cabourn brand; from Fred Perry to Karrimor, Red Wing to Viberg and Filson to Eddie Bauer. While this list seems like a ‘Who’s Who’ of heritage wear, Cabourn is careful and considered about who he collaborates with. Famously turning down an offer from Moncler, citing that doesn’t want to alter his brand’s DNA. He wants to keep the offering concise, pure and authentic. A large part of any collaboration for Cabourn is going back to the source. “There’s a story behind everything” the designer states unapologetically, as he continues to amass rare vintage garments and inspiration from niche publications. 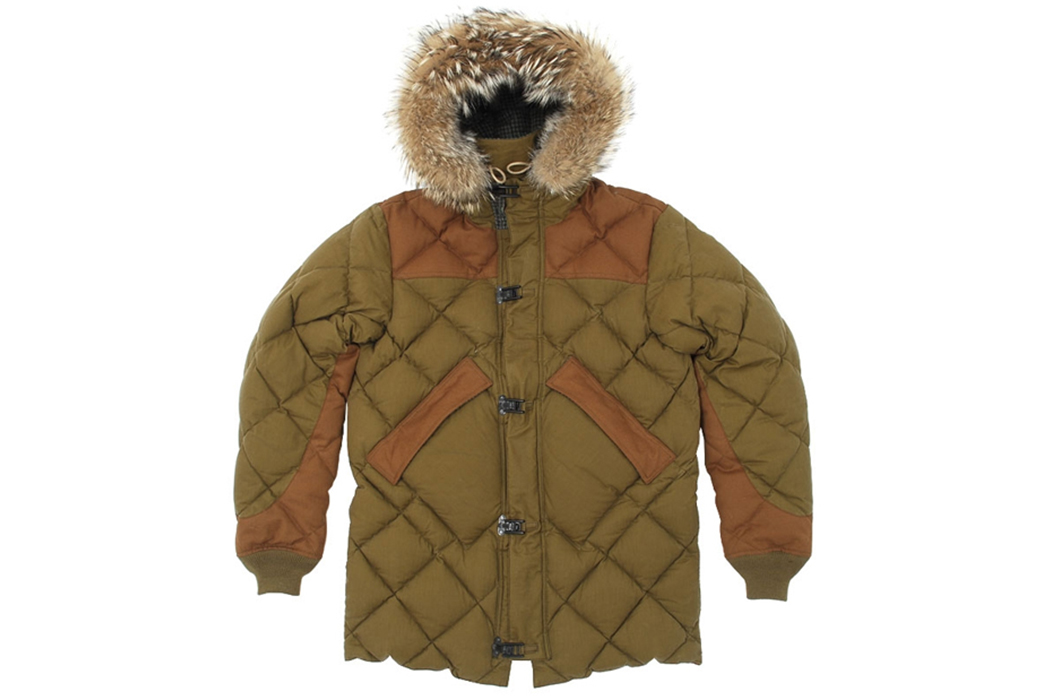 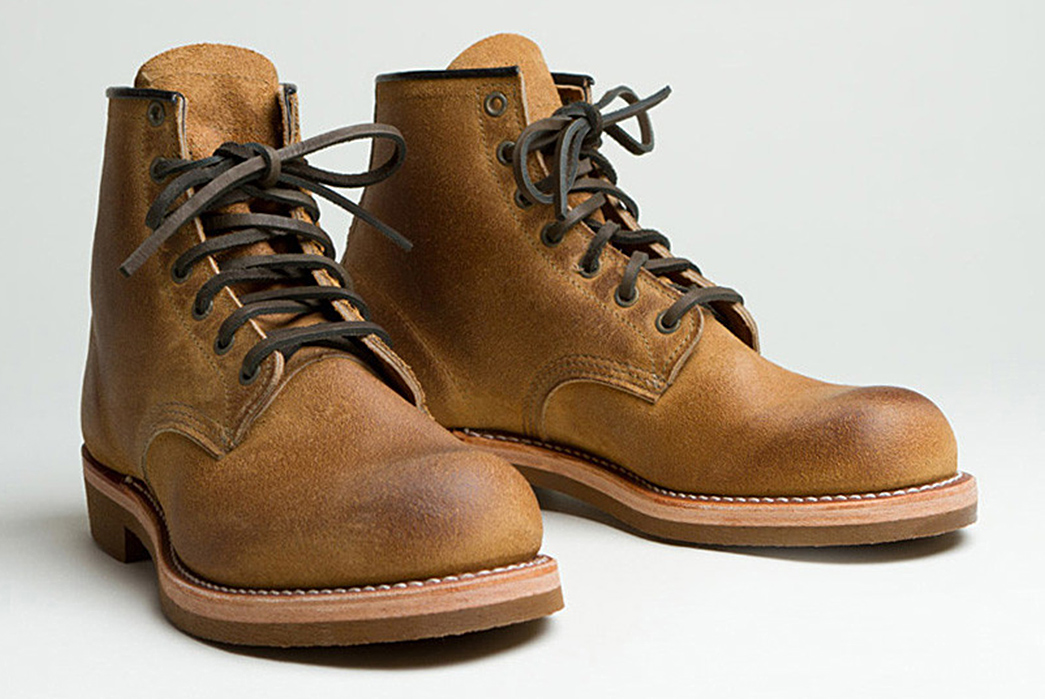 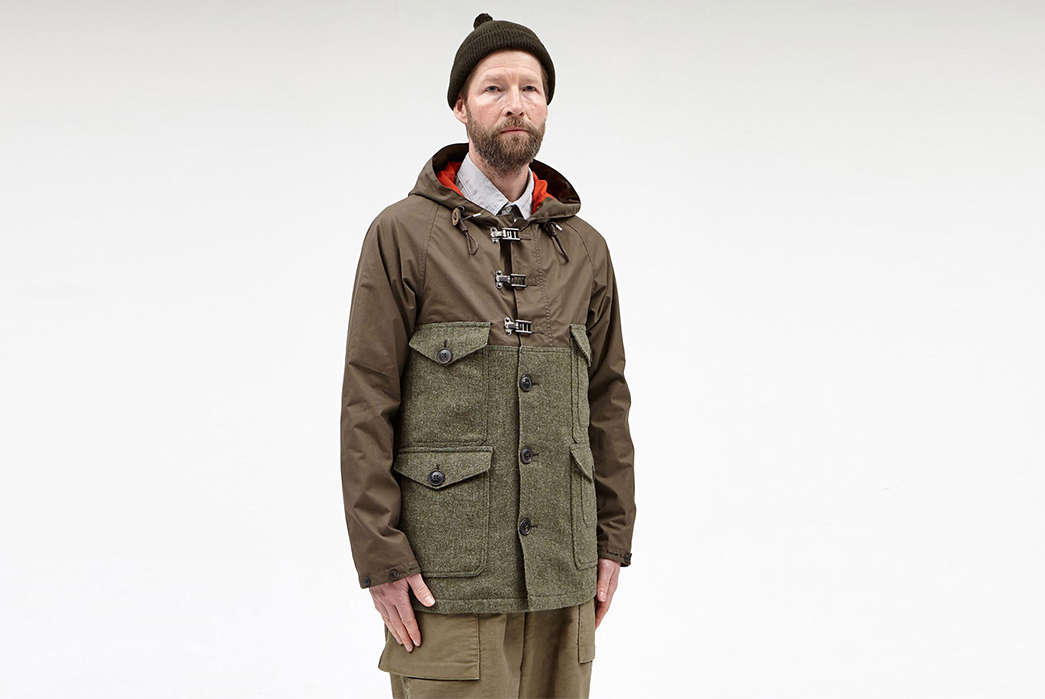 Available for $1108 at Nigel Cabourn.

It’s not just the vintage garments which Cabourn holds in his design archive that are sought after by collectors, some of the brand’s own creations are highly desirable and command top prices online. Jackets such as the Cameraman—a staple garment released each season—are in a league of their own. First appearing in the Ascent of Cabourn collection and inspired by pictures of Wilfrid Noyce, the jacket is a classic Cabourn outerwear piece. Made from a mixture of fabrics from Harris Tweed to Ventile, it boasts iconic fireman clips at the throat, four front pockets, and a three-panel hood. 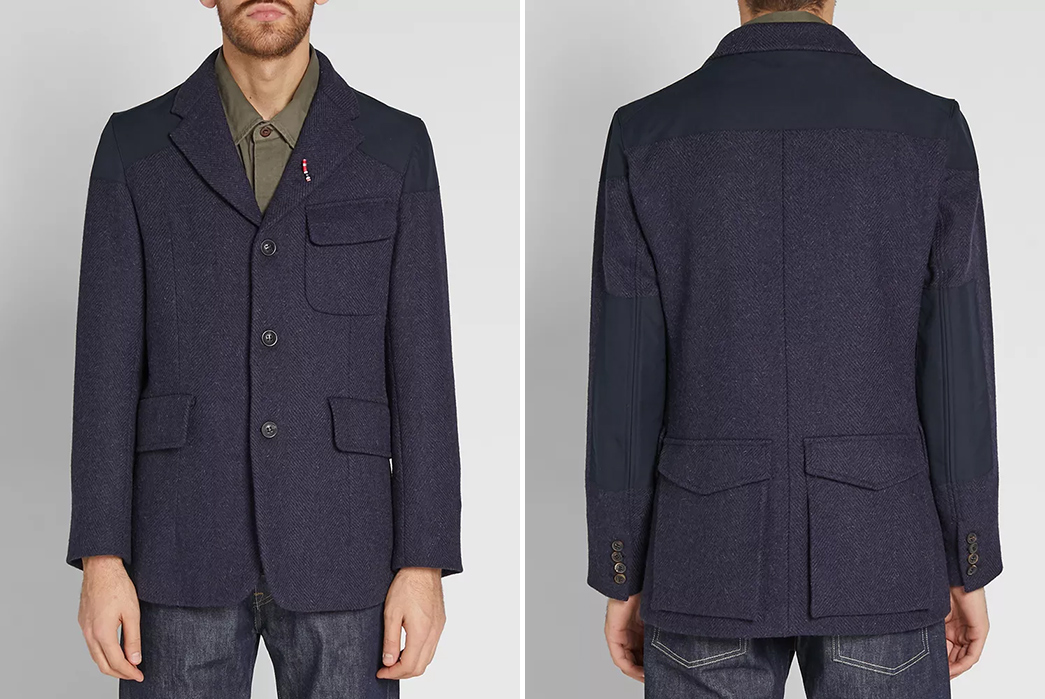 Inspired by the garb worn in the Everest expedition in 1924, the Mallory Jacket was first named The Sherpa and then The Tenzing after Sherpa Tenzing Norgay. It’s final name was settled upon after George Mallory’s body was discovered 75 years after his death in his attempt to climb Mt. Everest. The jacket has had many iterations since its debut in the Ascent of Cabourn collection in 2003, and each one is made England as true one-off editions. 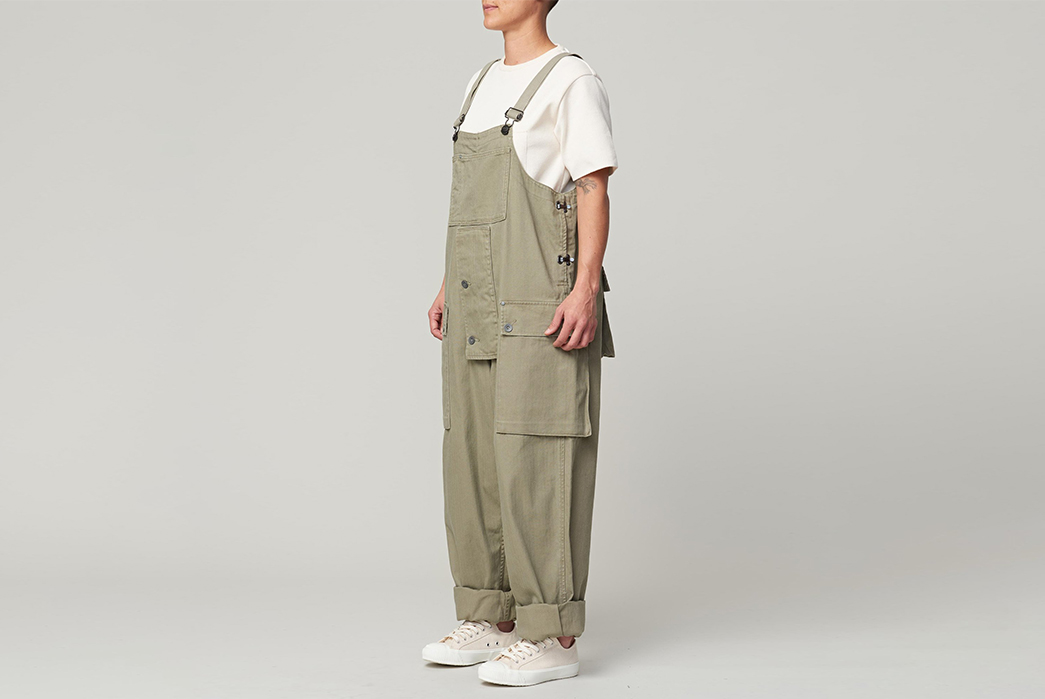 Similarly, the Lybro Dungarees have been an instant hit with new and old fans of the brand. Often seen worn by Nigel during his travels, the dungarees build on a relaxed military workwear vibe accentuated by the soft herringbone fabric or stubby Japanese denim. Featuring large cargo pockets to the thigh and chunky metal fixtures, these dungarees draw inspiration from the WWII deck clothing of the US Navy.

One thing is very clear about Cabourn: he’s a romantic. He obsesses over the story, the myth, and the legend. And in today’s society, is that such a bad thing? Cabourn takes the vintage detailing of the past and reinterprets it in a way which fits with today’s contemporary street style, whether you’re in Covent Garden or Osaka. And while business seems to be booming for the youthful man in his sixties, I’d like to think that Cabourn would still be treading the same rugged path even if it wasn’t. 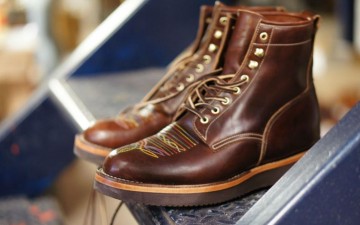 Unmarked Boots – Made With Pride in Mexico 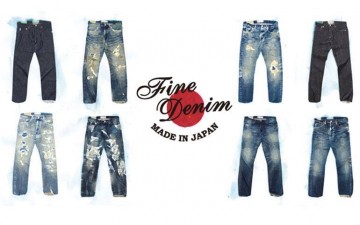