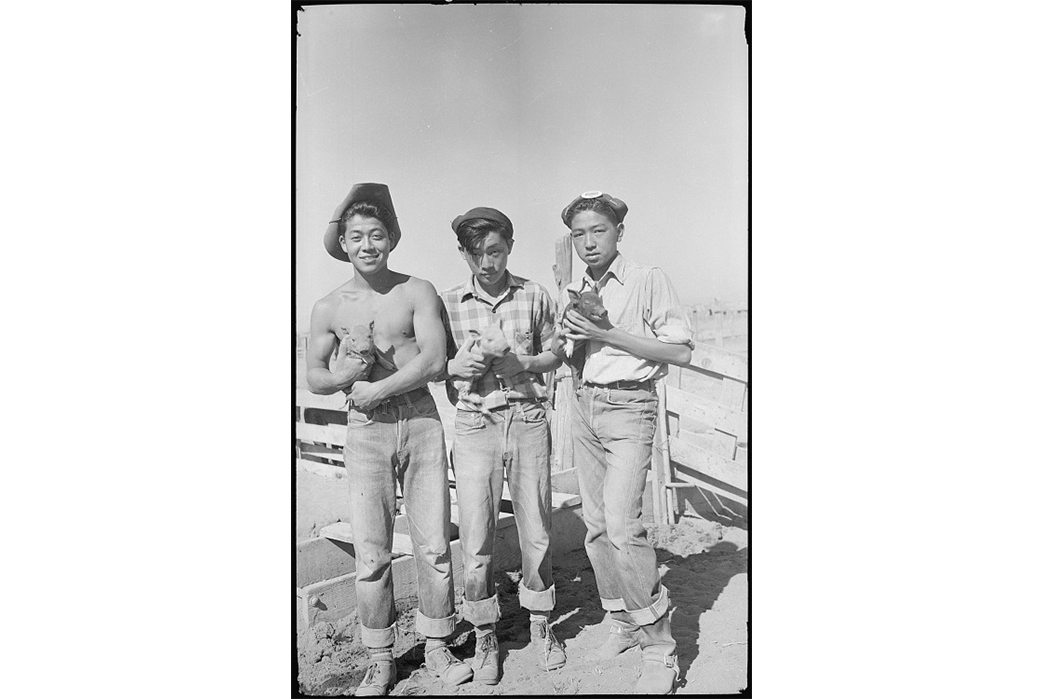 Why Denim Doesn’t Die – Marginal Identities in the Weave

A couple months ago, my work Slack was abuzz. A writer from Vice UK had published an article with the sensational title, “The Death of Denim: How Jeans Stopped Dominating Men’s Style” and everyone started weighing in. Naturally, as I work in denim, the majority of our commentary was unfavorable and the discourse quickly devolved to a thorough roast of the author’s personal style; but something bothered me.

It’s not uncommon to read these sensational “such-and-such trend is dying” articles, often titled (Insert fashion thing here) is Dead, Long Live (Insert fashion thing). It’s like in any industry, when you see articles that contradict each other crop up every few months. Brown Rice is Actually Bad For You! Flossing is Good For You! Wait, Now Flossing Is Actually Not Good For You Anymore. But what separated the Vice article from the other “denim is dead” derivatives I’d read lately was it’s central assertion that denim is inherently masculine and toxically so.

The author made the case that modern masculinity is changing, which is true, but that denim was somehow incompatible with this change. And suggests that a man in denim doesn’t care for his skincare or listen to Ariana Grande, which seemed like absurd correlations.

It’s challenging, from a modern perspective, to appreciate just how much the meanings and subtext of this legendary fabric have changed. The author draws a false equivalency between denim and manhood that only makes sense if you disregard the entire history of blue jeans.

The de facto uniform of America’s poor folks from the late-1800s until main-streamed post-WWII, blue jeans’ workwear status didn’t mean that just white men wore the clothing. Brando and Dean might be burned into our collective unconscious, but it was other, marginalized peoples that made jeans cool, not them. 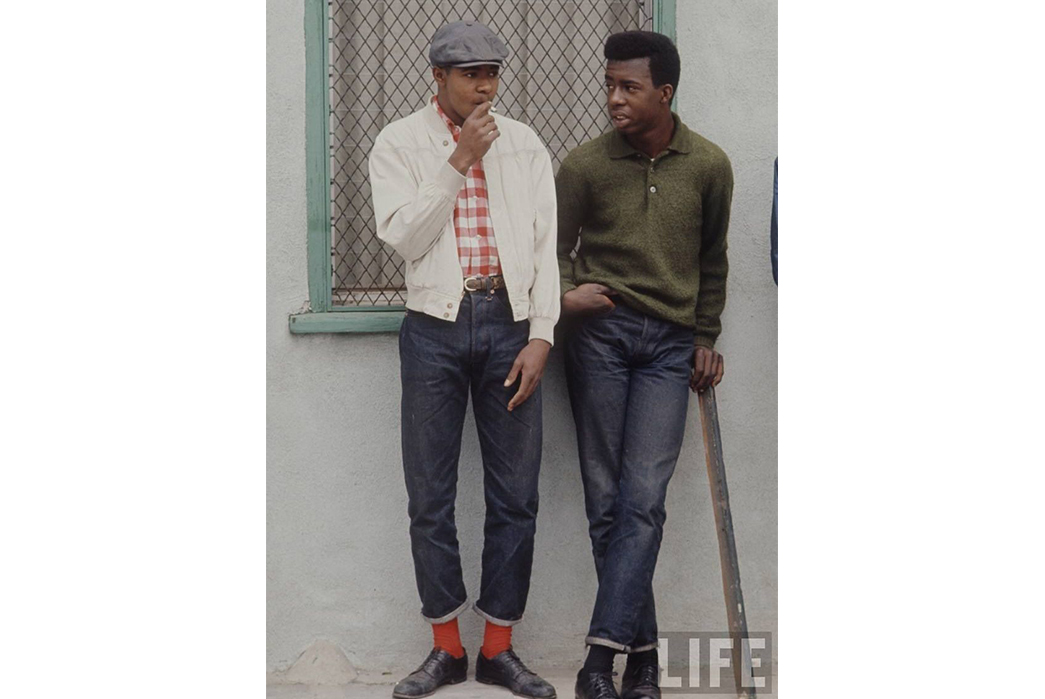 As I’ve often remarked, there is a forest-for-the-trees problem with much of men’s fashion, especially denim. Denim jeans have become so ubiquitous as to be unremarkable and their position in fashion’s mainstream can make wearing them seem less a statement and more of a safe choice.

But before denim was a safe choice, worn predominately by white, male, middle class men, it was a anything but. A risky fabric, associated with criminality, deviance, and marginal identities.

For many, many years after riveted blue jeans were first invented, they weren’t considered appropriate clothing for polite society (in other words, white society). Major U.S. magazines, even fashion ones, didn’t contain pictures of people wearing blue jeans or advertisements for denim brands until the mid to late-1960s.

Denim simply wasn’t worn unless you were working… or incarcerated. 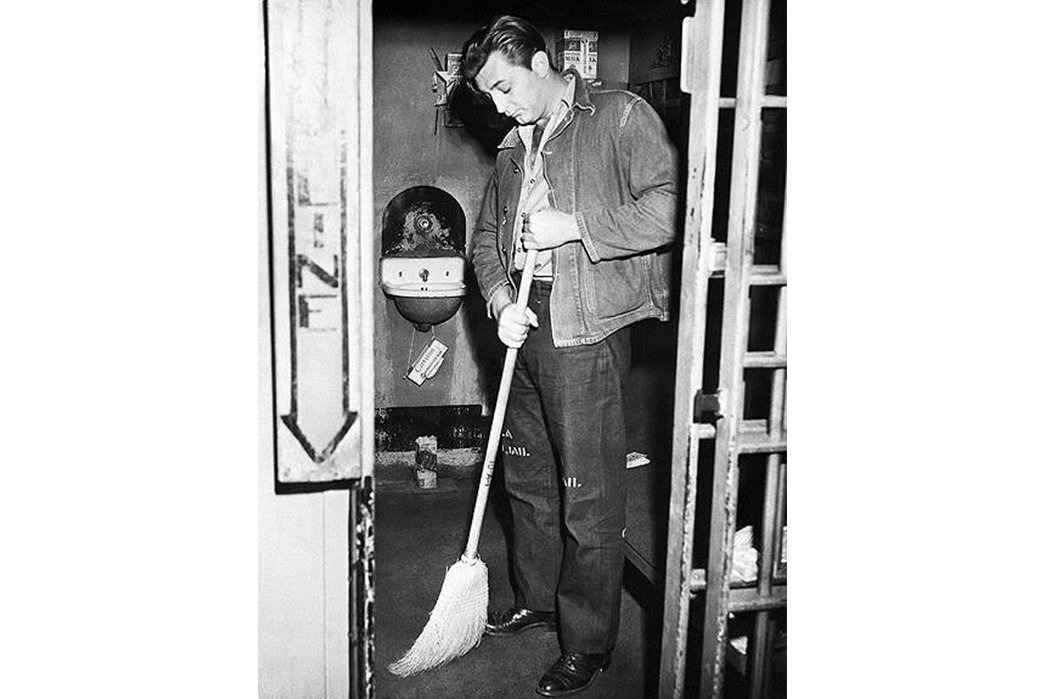 Robert Mitchum in his cell and his denim. Image via Pinterest.

Hollywood actor, Robert Mitchum, was booked in 1948 for possession of marijuana and widely photographed wearing his blue denim uniform from lock-up. Mitchum was the kind of debonair bad boy on whom a prison uniform looked good, but there was much speculation that his career would suffer.

White manhood, specifically respectable white manhood wasn’t meant to be seen wearing this proletariat material. If, for a moment, you can take a step back to a world in which blue jeans are not a wardrobe staple, aren’t even cool yet, then we can begin our journey.

Poor people from the South tried to avoid wearing denim at all costs once they pulled themselves out of poverty. Famously, Elvis Presley hated wearing jeans and so too did James Brown, as we mentioned in our history of Martin Luther King Jr. and workwear.

This avoidance wasn’t just a class thing, there was, however unconscious, an association between denim and slavery. Early in American history, mostly in the south, cheap denim made from hemp, was often called “slave cloth” (as well as some less savory names) because slave-owners would buy bolts of this cheap, uncomfortable cloth for their slaves to sew into garments.

For many southerners, white and black, denim was an uncomfortable reminder of racial and class conflict that was typically avoided when not performing manual labor.

Cheap denim would continue to clothe people trapped in other unpleasant and predatory Southern institutions, like prisons and sharecropping. Though the movies that have memorialized these institutions often star white actors, such as Cool Hand Luke, (pictured above) the allusions to slavery are pretty clear. 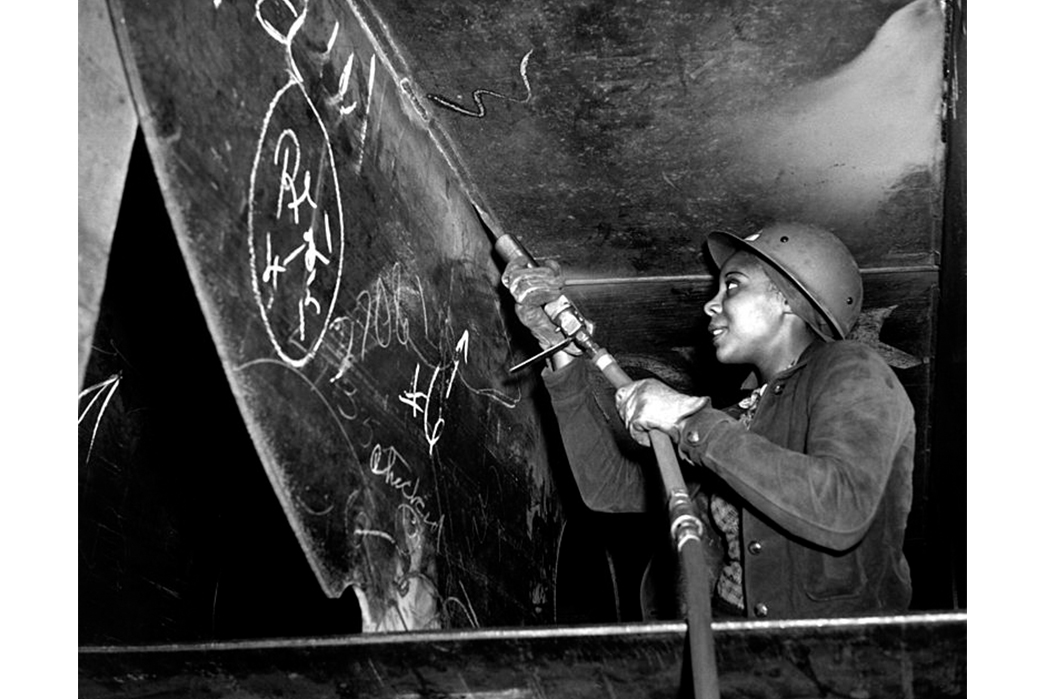 For men, denim was often a frustrating reminder of social status, but for women, denim could be associated with unprecedented advancement. During WWII, when the workforce dwindled with most of America’s eligible men abroad, women began working in manufacturing jobs at levels never before seen.

Women donned the very same pieces of workwear their exasperated husbands and brothers had worn back home, but for them, the coarse, heavy garments had a very different meaning. The war meant that rigorously defended gender norms slightly relaxed and women were allowed to earn a living outside of the home in grueling but rewarding industries.

This emancipation from gender norms was only temporary unfortunately, but this brief chapter is forever woven into the history of the cloth. 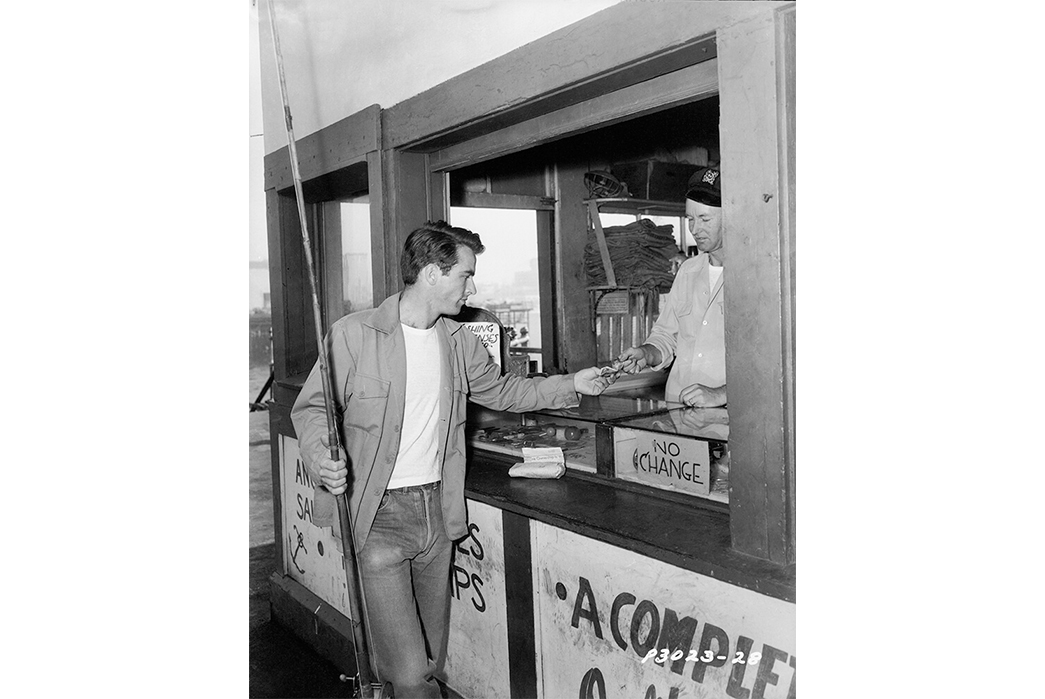 After WWII, denim jeans began to go mainstream, thanks large in part to a number of popular films marketed to a burgeoning new group called “teenagers.” These teenagers had disposable income and were able to shop, not just for necessity, but for style and their style was greatly informed by Hollywood.

Actors like James Dean, Marlon Brando, and Montgomery Clift all had their big breaks in an era where denim was appearing more openly onscreen and a new style of performance was gaining popularity. All three of these men shared two characteristics:  they had studied the Stanislavsky method of acting, which involved being more emotive and genuine, and by today’s standards they would all have been considered queer or bisexual.

Though from a modern standpoint, they all appear relatively straight-passing and butch, their nuanced performances of masculinity wouldn’t have been lost on their contemporaries. Many of denim’s early film appearances are tied to men’s increased emotional intelligence coincidentally worn by queer actors. 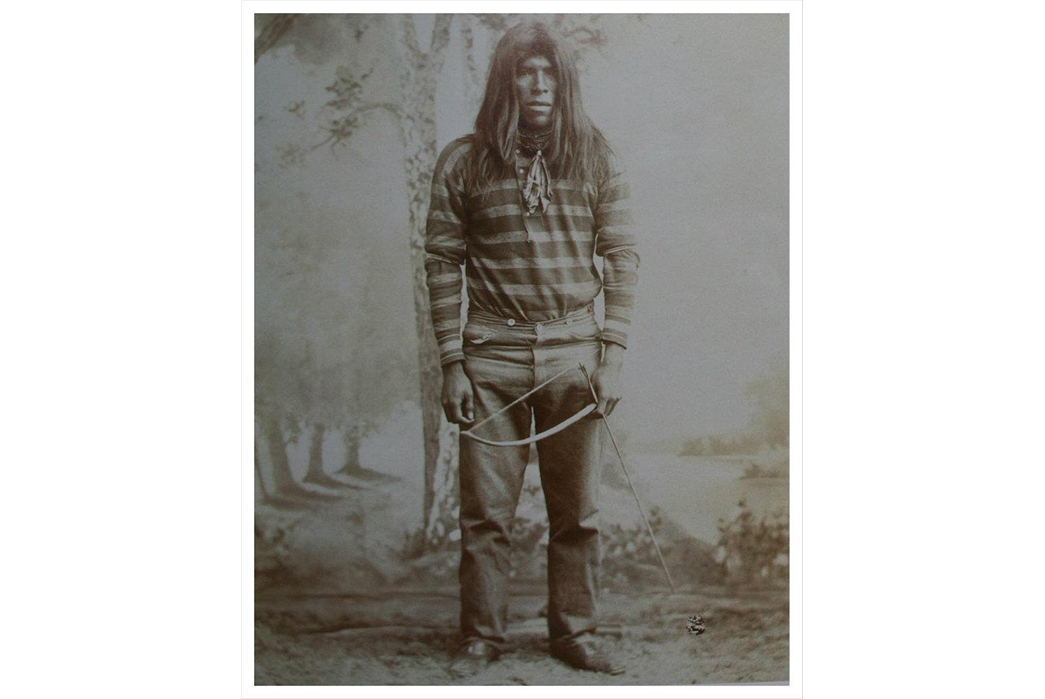 Maybe it’s an overly romantic notion, but I believe that denim as we know it today is imbued with all these stories, even if we may not be able to perceive it on a daily basis. Just as denim shrinks and stretches with our bodies, so too does it warp to fit into our lives in any given era.

But it’s important to recall that denim isn’t all cowboys and miners (or at least not just white ones), nor was it always an acceptable material to wear out of the house as we do today. Thankfully, masculinity and conceptions of gender are changing, but I don’t think that denim warrants giving up nor do I think people need give it up to stay current and politically correct. 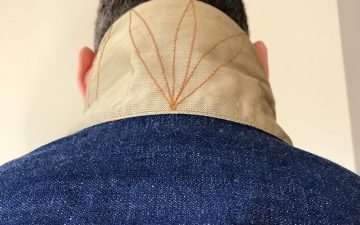 The Time Is Right For Hemp Clothing 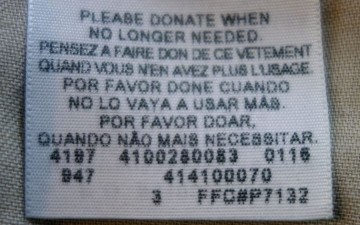 The Afterlife of Cheap Clothing – Beneath the Surface 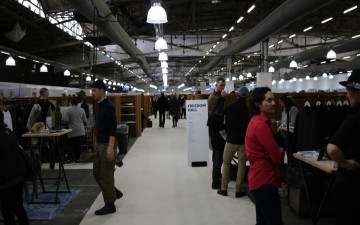 The Future of the Trade Show – White Oak Economy